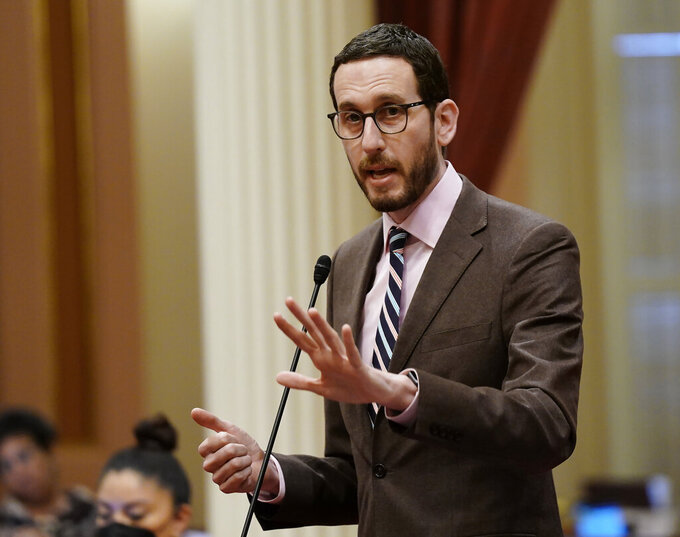 SACRAMENTO, Calif. (AP) — California Gov. Gavin Newsom on Friday signed a new state law that will stop police from arresting people for loitering for prostitution, an issue that divided sex workers and advocates during a rare nine-month delay since state lawmakers passed the bill last year.

“To be clear, this bill does not legalize prostitution," Newsom said in a signing message. “It simply revokes provisions of the law that have led to disproportionate harassment of women" and transgender adults, he said, nothing that Black and Latino women are particularly affected.

The bill will bar police in California from arresting anyone for loitering with the intent to engage in prostitution. Sen. Scott Wiener and other supporters said such arrest decisions often rely on an officer’s perception.

While Newsom said he agreed with the intent of the repeal, “we must be cautious about its implementation.” He said his administration will track crime and prosecution trends “for any possible unintended consequences” and, if so, work to correct them.

“For far too long, California law has been used to profile, harass and arrest transgender and gender-nonconforming people simply for existing in public spaces,” Tony Hoang, executive director of the LGTBQ rights group Equality California, said in praising the repeal.

The measure also will allow those who were previously convicted or are serving sentences to ask a court to dismiss and seal the record of the conviction.

Similar legislation became law in New York last year in what Wiener said is part of a broader effort to end violence toward and discrimination against sex workers.

“Everyone — no matter their race, gender or how they make a living — deserves to feel safe on our streets,” Wiener said in a statement thanking Newsom.

Wiener, Newsom’s fellow Democrat, used a parliamentary maneuver to delay Newsom’s consideration for months after the bill passed the Legislature in September. He hoped the pause would give proponents time to build more support, including by signing an online petition.

Opponents like the California Family Council countered with their own online petition as part of a monthslong tug-of-war.

The loitering law allows police “to criminalize otherwise legal activities like walking, dressing or standing in public,” the ACLU said.

Moreover, workers who fear arrest for loitering “are more vulnerable to exploitation and violence, and face greater barriers to accessing safe housing and legal employment,” the group argued.

The nonpartisan National Center on Sexual Exploitation took the opposite view, saying that ending the law would make it easier for traffickers and sex buyers to exploit vulnerable people.

“Many officers rely on the loitering laws to initiate trafficking investigations that have led to serious convictions for traffickers and pimps," said Stephany Powell, a former LAPD vice sergeant and now the center's director of law enforcement training and survivor services.

The Los Angeles County Sheriff’s Department and the 75,000-member Peace Officers Research Association of California objected that the law would make it harder both to confront those who commit crimes related to prostitution and human trafficking and to help those who are being victimized.

Republicans in the Senate and Assembly asked Newsom to veto the measure.

“Instead of providing help to survivors, this bill is hurting them. It's increasing demand,” said Vanessa Russell, founder of the anti-sex-trafficking organization Love Never Fails in the San Francisco Bay Area.

“If there is no intervention allowed by law enforcement, fatalities will increase," added Hannah Diaz, who was among survivors who joined Russell at an event last year opposing the bill.

The loitering bill is the latest of several related measures that became law in recent years.

A bill passed in 2016 bars arresting minors for prostitution, with the intent that they instead be treated as victims.

A 2019 bill bars arresting sex workers if they are reporting various crimes as a victim or witness. The same law bans using possession of condoms as reason for an arrest.