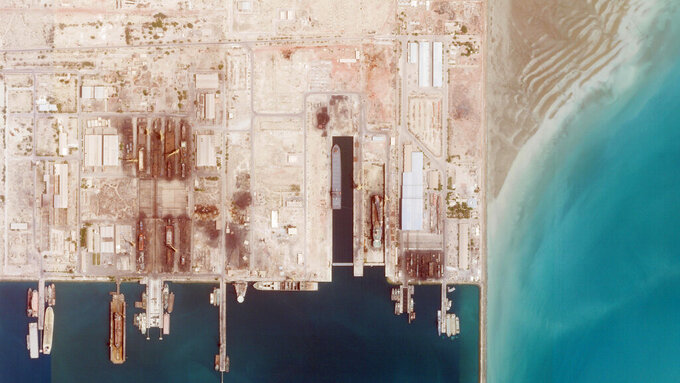 Planet Labs PBC, ASSOCIATED PRESS
This satellite photo from Planet Labs PBC shows the Iranian Revolutionary Guard's newest ship, the Shahid Mahdavi, center right, under construction in a shipyard west of Bandar Abbas, Iran, Saturday, May 21, 2022. Iran's paramilitary Revolutionary Guard is building the massive new support ship near the strategic Strait of Hormuz as it tries to expand its naval presence in waters vital to international energy supplies and beyond, satellite photos obtained by The Associated Press show. (Planet Labs PBC via AP)

DUBAI, United Arab Emirates (AP) — Iran's paramilitary Revolutionary Guard is building a massive new support ship near the strategic Strait of Hormuz as it tries to expand its naval presence in waters vital to international energy supplies and beyond, satellite photos obtained by The Associated Press show.

The construction of the Shahid Mahdavi provides the Guard a large, floating base from which to run the small fast boats that largely make up its fleet designed to counter the U.S. Navy and other allied forces in the region.

Its arrival, however, comes after a series of setbacks for both the Guard and Iran's regular navy, including the loss of its largest warship less than a year earlier. As negotiations over Iran's nuclear deal with world powers also founder, further confrontations at sea between Tehran and the West also remain a risk.

“They are looking beyond the Persian Gulf and into the blue waters of the Arabian Sea and the Red Sea and the northern Indian Ocean,” said Farzin Nadimi, an associate fellow at the Washington Institute for Near-East Policy who studies the Iranian military.

The Shahid Mahdavi appears to be a retrofit of an Iranian cargo ship known as the Sarvin, based off of previous pictures of the vessel which also has a similar curve to its hull.

The Sarvin arrived off Bandar Abbas in late July last year and then switched off its trackers. By Jan. 29, satellite photos from Planet Labs PBC analyzed by the AP showed the vessel at drydock at Shahid Darvishi Marine Industries, a company associated with Iran's Defense Ministry just west of Bandar Abbas.

An image of the Shahid Mahdavi circulated first on social media. The ship appears to have crewed anti-aircraft weapons on its bow and stern, according to H.I. Sutton, a military ship expert who first identified the ship as being near Bandar Abbas. A flag for the Revolutionary Guard, showing its logo of a fist gripping an assault rifle with a Quran underneath and a globe behind it, hangs from the ship's bridge.

A high-resolution Planet image taken of the drydock Saturday on behalf of the AP showed the gun-metal gray Shahid Mahdavi still at the shipyard. Just next to it, one of Iran's Kilo-class, diesel-powered attack submarines appears to be undergoing a major overhaul. Iran is believed to have one Kilo-class sub that's operational while another is also nonfunctional, according to the International Institute for Strategic Studies.

As the image of the Shahid Mahdavi circulated online, the semiofficial Fars news agency ran a story about the ship. Fars, believed to be close to the Guard, described the vessel as a “mobile naval city" capable of “ensuring the security of Iran’s trade lines, as well as the rights of Iranian sailors and fishermen in the high seas.”

“This range of new defense and combat innovations for the construction of heavy vessels, in line with the mass development of light vessels, and equipping them with various arrays can maintain Iran’s authority over the Persian Gulf and the (Gulf) of ​​Oman always in the face of transregional enemies,” Fars said.

Such floating bases have been used before in the region, particularly by the U.S. Navy during the 1980s so-called “Tanker War" after Iraq invaded Iran. As Iranian mines detonated against crude oil shippers amid that war, the Navy began escorting ships out of the Persian Gulf through its narrow mouth, the Strait of Hormuz. The strait to this day sees a fifth of all oil traded pass through it.

During the conflict, U.S. special forces operated from commercial barges that served as forward operating bases. The Navy still works with the idea today — the Mideast-based 5th Fleet has been home to the USS Lewis B. Puller, a massive ship designed off an oil tanker that can host troops and attack helicopters.

“The Shahid Mahdavi looks like it will be configured to be an afloat forward staging base, to use the U.S. Navy term,” said Michael Connell, an expert on Iran at the Virginia-based Center for Naval Analyses. "The Puller was parked for many years in the Persian Gulf and the Iranian military witnessed its utility as a platform for expeditionary warfare and power projection."

For years, the Guard patrolled the Strait of Hormuz and the Persian Gulf, while Iran's regular navy patrolled the seas and oceans beyond. Building the Shahid Mahdavi likely gives the Guard the ability to expand its presence into those waters once patrolled by the navy.

History also isn't something that has escaped Iran. The choice of the name for the Guard's newest ship — Shahid Mahdavi, or Martyr Mahdavi — comes from Nader Mahdavi, an Iranian Guardsman killed by the U.S. Navy in 1987 during the “Tanker War.”

America's killing of Mahdavi, which came after his forces opened fire on U.S. special forces helicopters, still resonates in Iran today. Tehran has alleged without evidence that America captured him alive and tortured him due to the condition of his body after it was returned. The American helicopters had strafed the Iranian vessels Mahdavi oversaw with machine guns, rockets and “fléchette” rounds — small metal darts.

Supreme Leader Ayatollah Ali Khamenei himself once gave a speech with a portrait of Mahdavi near him in 2019. That was around the time of a series of mine attacks on Mideast shipping that the U.S. Navy blamed on Iran amid the collapse of Tehran's nuclear deal with world powers.

Using Mahdavi's name suggests the Guard views this as a means by which to challenge the U.S. Navy in the Mideast, particularly with the new ship likely able to support the so-called “swarm attacks” Iran can launch against larger American warships.

Cmdr. Timothy Hawkins, a 5th Fleet spokesman, declined to comment specifically about the Shahid Mahdavi as “we're careful not to discuss intelligence-related matters.”

“But generally speaking, we pay very close attention to the maritime environment with our international partners in the interest of regional security and stability,” Hawkins said.

The arrival of the Shahid Mahdavi, which would be the biggest ship in the Guard's fleet, comes amid a series of naval disasters for Iran. The Kharg, the regular navy's largest warship, sunk last June. In 2020, a missile mistakenly struck a naval vessel during an exercise, killing 19 sailors and wounding 15. An Iranian navy destroyer sank in the Caspian Sea in 2018.

Meanwhile, a cargo ship in the Red Sea believed to be a Guard intelligence base suffered an explosion suspected to be caused by Israel last year. The Shahid Mahdavi could serve a similar role in espionage and sabotage missions by special forces, said Nadimi, the analyst at the Washington Institute. It also could be potentially outfitted with long-range missiles as well.

“Nasty things can happen around this ship,” Nadimi warned.