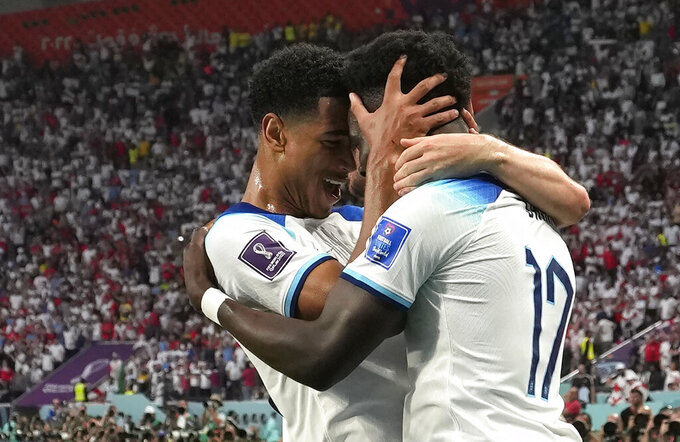 DOHA, Qatar (AP) — He started. He scored. He got serenaded.

All in all, a pretty good World Cup debut for 19-year-old Jude Bellingham.

The England midfielder, who hadn't even made his professional debut by the time the last World Cup was played four years ago, scored the first goal Monday in a 6-2 victory over Iran at Khalifa International Stadium.

And it was his first goal for England.

“No better place to do it,” said England captain Harry Kane, who was the leading scorer at the tournament four years ago when the team reached the semifinals.

The England fans who made their way to the first World Cup in the Middle East certainly enjoyed it, singing the Beatles classic “Hey Jude” to Bellingham, who is quickly living up to his reputation as one of the most talented youngsters in the game.

Several of Europe’s leading clubs are already positioning themselves for an off-season move with Borussia Dortmund widely expected to be selling. Manchester United, Manchester City and Liverpool are all said to be admirers.

The goal on Monday came from a header that sailed over the opposing goalkeeper in the 35th minute.

“To be honest, I thought it had missed," Bellingham told the BBC. "Then it took ages to loop into the goal. I said I wanted to score more goals for Dortmund and England this year and to get in the right position. Brilliant ball in from (Luke) Shaw and I was just there to flick it away. Really proud moment for me.”

Bellingham made his professional debut for Birmingham City in 2019 when he was only 16 years old. Europe's biggest clubs took notice.

He spurned United, even after former manager Alex Ferguson was enlisted to entice him to the Premier League club.

Instead, Bellingham believed his development would be better served in Germany with Dortmund. It turned out be a sound choice.

And with the boisterous singing coming from the stands in Qatar, it sounded even better at his first World Cup.