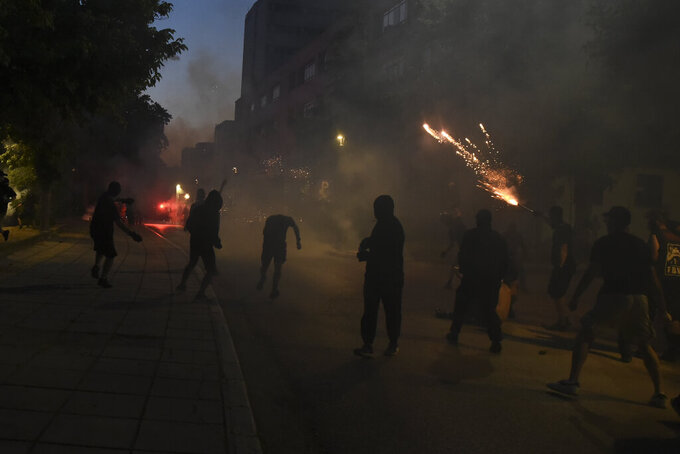 Giannis Papanikos, ASSOCIATED PRESS
A protester shoots fireworks towards the police forces during a protest at the University of Thessaloniki in northern Greece, Thursday, May 26, 2022. Earlier Thursday, the protesters faced off with police inside the city's main university campus, where unrest has been bubbling for weeks over a left-wing squat that was closed down. (AP Photo/Giannis Papanikos)

About 5,000 members of left-wing and anarchist groups took part in the march through the center of Thessaloniki, with some smashing shop windows and setting rubbish bins on fire. At least eight people were detained. No injuries were reported.

Earlier in the day, protesters faced off with police at the city's main state university campus, where unrest has been bubbling for weeks over a left-wing sit-in that was closed down. Officials are trying to build a new library where the squat was, and police are there to guard construction workers from attacks by people angered by the ending of the sit-in.

Protesters are angry at government plans to introduce a new police body to guard university campuses, which lack effective private security and have suffered from political violence as well as petty crime.

Greece's center-right government has scrapped decades-old laws that effectively prevented police — in the name of protecting academic liberties — from entering university grounds in most circumstances.

Left-wing opposition parties strongly criticized that move as well as the planned campus police, who are expected to assume duties in coming weeks.