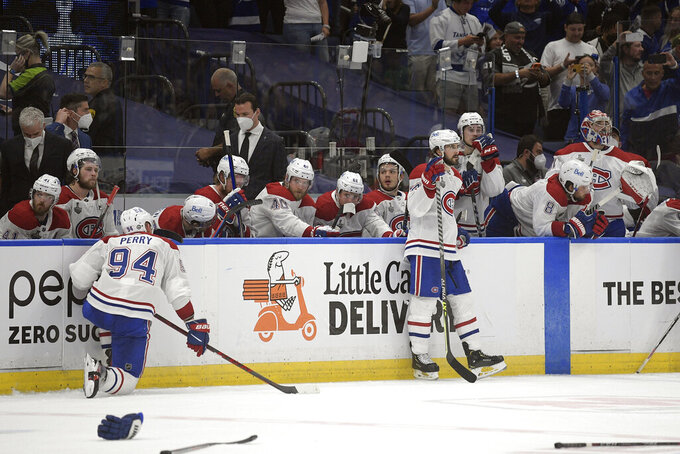 Brendan Gallagher lowered his head and began wiping tears from his scarred face, having difficulty accepting the sudden finality of the Montreal Canadiens' season being over.

Already the inspirational leader of the franchise, Gallagher provided the voice to the bitter feelings of disappointment he and his teammates felt following a 1-0 Stanley Cup Final-clinching loss in Game 5 to the defending champion Tampa Bay Lightning on Wednesday night.

“It’s hard right now.” Gallagher began, before breaking into such a long pause the Zoom meeting moderator was prepared to go to the next question.

“Sorry, I’ll try to answer,” Gallagher interjected. “We’ve got so many players that worked their entire career to get to this point, and it’s a tough pill to swallow.”

And no point suggesting to him how the Canadiens were dismissed at almost every step of the way.

Montreal was the last team to clinch a playoff spot, with the worst record of the 16 qualifiers, and became the last team eliminated while making its deepest playoff run in 28 years.

“A lot of guys banged up,” Ducharme said. “But they bled. They fought. They never quit.”

For all the grit and perseverance the Canadiens displayed in overcoming a 3-1 first-round series deficit to Toronto and with Ducharme sent into self-isolation after testing positive for COVID-19, Montreal came up short against a sturdier and more accomplished opponent.

Ross Colton’s redirection of David Savard’s pass with 6:33 left in the second period clinched Tampa Bay the Cup, but the turning point might well have come with 1 second left in Game 2. That’s when Blake Coleman scored the go-ahead goal by diving in to chip in a shot past Carey Price in an eventual 3-1 win in which the Canadiens thoroughly outplayed the Lightning.

Price blamed himself, saying: “At the end of the day I don’t think I played well enough at the start of the series.”

Sitting next to Price at the podium, Weber immediately rallied to the goalie’s defense.

“I don’t think that’s the case to be honest,” Weber said. “I think we weren’t good enough in front of Carey. Give (the Lightning) credit. They’re a heck of a team. They’re here for a reason. And they were better than us in the end.”

With four “Clydesdale” defensemen on the back end, and the addition of Stanley Cup-winning experienced leadership, general manager Marc Bergevin built the Canadiens with an eye on the playoffs.

In the playoffs, Montreal looked nothing like the team that closed the season 0-3-2 while missing Price and Gallagher to injuries. This was also a team that had to overcome the distraction of a COVID-19 outbreak and a coaching shakeup, with Ducharme promoted from his assistant’s role after Claude Julien was fired in February.

Come the playoffs, the Canadiens were transformed into a focused, four-line, opportunistic team that fed off Price, who shook off an inconsistent season and regained a calm, puck-smothering focus in net.

Montreal was catapulted by overtime wins in Games 5 and 6 against Toronto to knock out the Maple Leafs in Game 7. Shrugged off again, the Canadiens then swept the Winnipeg Jets in the North Division final and beat heavily favored Vegas in six games.

The Canadiens remained defiant when falling behind 3-0 to the Lightning, with Josh Anderson delivering on his “we’re not finished” rallying cry to score twice, including in overtime, in a 3-2 win in Game 4.

The playoffs showed the Canadiens have a promising future with the combination of second-year forward Nick Suzuki and rookie Cole Caufield, who has appeared in more playoff games (20) than regular season (10).

Questions remain, however, for a team with aging stars in Price (34 next year) and Weber (36), and key players eligible to become free agents, including top defensive forward Phillip Danault and the entire fourth line of Perry, Staal and Joel Armia.

Gallagher was already looking ahead to next season, citing the youngsters and the lessons the team needs to learn from losing.

“I wish it wasn’t the case, but maybe this is the journey we needed,” Gallagher said. “If we’re able to learn from this experience, maybe the positive side, we can be better off. But right now, I don’t know what to tell you. It stinks.”