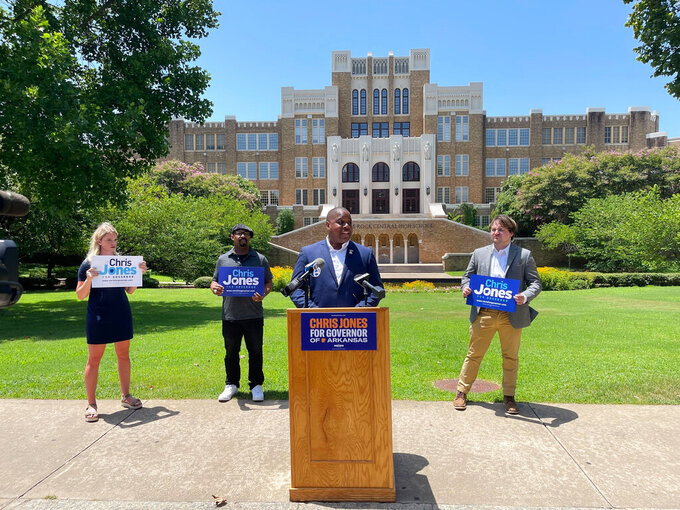 Jones endorsed a proposal that Republican Gov. Asa Hutchinson made earlier this year to increase minimum teacher salaries in the state to $46,000 a year. Hutchinson, however, has said he won't put the proposal on the agenda for next month's session due to lack of support in the majority-GOP Legislature.

“When we invest in teachers, they invest in students and teachers are worth the investment," Jones said at a news conference outside Little Rock Central High School. “Right now, they deserve to know and see that they are a priority."

Jones is running against Republican nominee and former White House press secretary Sarah Sanders, who is heavily favored in the November election in the solidly red state. Hutchinson is barred by term limits from seeking reelection. Sanders' campaign did not respond to a request for comment.

Lawmakers are meeting next month for a special session focused on tax cuts after the state ended the fiscal year with a $1.6 billion budget surplus. All 29 Democratic members of the Legislature signed an open letter released Monday supporting putting the pay raises on the session agenda. It would take a two-thirds vote of both chambers of the Legislature to consider the issue if it's not on the agenda.

Arkansas has raised teacher salaries over the past several years, and the minimum teacher salary for the coming school year is $36,000. Proponents of the pay raise have noted that base salaries in most of the states adjoining Arkansas is higher. Mississippi's governor in March signed legislation setting its base pay at $41,500.

Republican legislative leaders have said the special session isn't the right time to take up the issue, since the Legislature hasn't completed its annual review of education funding required by law. That review is used to recommend increases in school funding and includes a look at teacher salaries.

GOP lawmakers on Tuesday also noted that there's about $500 million in federal COVID-19 relief funding that districts could use to provide bonuses for teachers.

“What we’re encouraging districts and really the administration to do is talk with their school boards and superintendents about the availability of these funds and the fact they can be used for retention and recruitment," Republican Sen. Jonathan Dismang, who co-chairs the Joint Budget Committee, said.

Jones said the state could use part of its surplus to help pay for the salary increase, and vowed to raise minimum salaries to $50,000 within four years if elected.

Jones also called for setting aside $400 million from the surplus for one-time needs, including bonuses of between $1,000 and $2,500 for teachers and staff. Other one-time needs include an incentive program aimed at addressing a shortage of rural teachers.