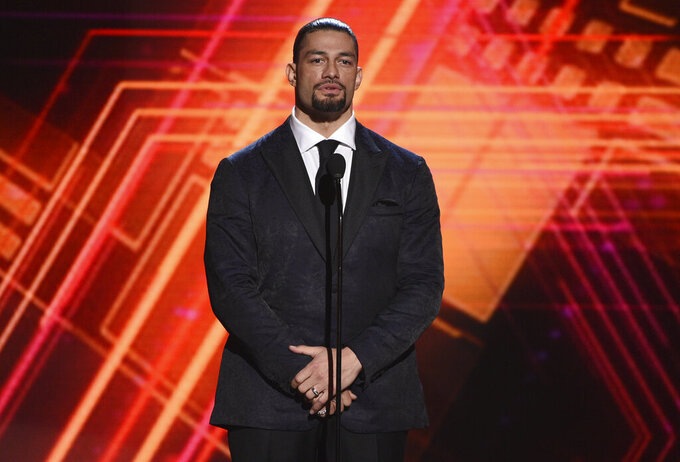 Johnny Knoxville once landed on his head and almost died after he was struck by a bull, attacked by a yak and almost blown up on a rocket.

The stunt man knows how to absorb a beating -- and the “Jackass” star had the shattered bones and concussions to prove it. But as for dishing out some punishment? The 52-year-old figured it was time to take the fight from the bull ring to the wrestling ring against Sami Zayn.

“For WrestleMania, it’s not going to be too safe for Sami Zayn, I’ll tell you that right now,” Knoxville said. “He’s going to be wishing he got run over by a bull.”

Knoxville is the latest celebrity to lace up the boots for a feature match at WrestleMania, joining the likes of former winners Bad Bunny and Mr. T. Also on the card is YouTuber Logan Paul in a tag-team bout and retired NFL punter Pat McAfee has a match against WWE CEO Vince McMahon's hand-picked protégé Austin Theory.

“I see it going either way,” Undertaker said. “If you press me, I’m going to say Roman wins. That might be an upset but that’s kind of what I’m thinking.”

WrestleMania returns to AT&T Stadium for the first time since Dwayne “The Rock” fired a flamethrower in front of nearly 94,000 fans in 2016.

Knoxville fights Zayn in an “Anything Goes” match on Sunday. In other words, don’t be surprised to see Knoxville bring some of his “Jackass” cronies along for the ride to help him pull off a win against the pesky Zayn. Knoxville appeared on WWE TV earlier this year to promote his movie “Jackass Forever.” Zayn eliminated Knoxville from the over-the-top-rope Royal Rumble match in January to kickstart the full-fledged feud.

The men have tried to upstage each other as part of the storyline for the last three months: Zayn crashed the “Jackass” red carpet premiere; Knoxville cost Zayn a match and the Intercontinental belt.

“It’s just talking so much smack all the time,” Knoxville said in an recent interview with The Associated Press before “Smackdown." “It’s one of the only things I’m decent at. So to be able to use that negligible skill for this is wonderful.”

Knoxville insisted he’s been seriously training for his professional wrestling singles debut. He grew up watching wrestling, but it didn’t necessarily steer him toward the path of starring in his own MTV reality show.

“That was more of the influence of my father and Evel Knievel and cartoons,” he said. “But there’s a common thread between the WWE and Jackass.”

The connective thread included a night at a hotel before the Royal Rumble when Knoxville spotted Lesnar -- the former UFC heavyweight champion -- strolling the restaurant. Knoxville egged on Lesnar to throw pint-sized “Jackass” star Wee Man through a table.

Sure enough, the hulking Lesnar picked up Wee Man and slammed him through the dinner table.

Knoxville said he’d like to stick around past WrestleMania and continue his relationship with the company. He also hasn’t completely ruled out another “Jackass” film after “ Jackass Forever ” grossed roughly $80 million in a pandemic.

“The world’s in a pretty crazy place. We were hoping people would go to the theaters because they need a laugh right now, but we didn’t know,” he said. “That they turned out and liked what we did, it means the world to us.

“We could do another one. But who knows?”