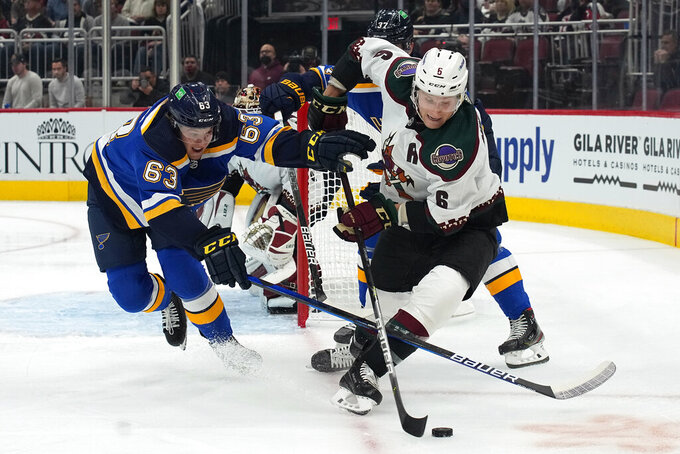 GLENDALE, Ariz. (AP) — Jordan Kyrou had two goals and two assists, and the St. Louis Blues scored five times in a 5:07 span of the second period for a 7-4 victory over Arizona in the Coyotes’ home opener Monday night.

“I want to be an impact player,” Kyrou said. “Help my team win. Whatever I can do out there.”

Kyrou and Klim Kostin had two goals apiece during the second-period flurry, which began when Justin Faulk scored on a power play to tie it 2-all at 11:10 after goalie Carter Hutton lost his stick during a scramble in the crease.

Kyrou scored his first goal after a Coyotes giveaway at 12:46 to give the Blues a 3-2 lead, and Kostin got two goals 47 seconds apart to make it 5-2 as Arizona had trouble getting the puck out of its own end.

Hutton was pulled for Karel Vejmelka after Kyrou skated in alone to cap the scoring burst for a 6-2 lead at 16:17.

“Elite skill,” teammate Tyler Bozak said of Kyrou. “Something we get to see in practice every day in practice. He can do a lot of amazing things with the puck and find ways to score and make something out of nothing. We’re lucky to have him.”

Kyrou credits his quick start to a summer of home cooking.

“A lot of my mom’s Greek food, for sure," he said. "A lot of Greek salads and chicken souvlakis.”

Clayton Keller had a goal and an assist, and Shayne Gostisbehere added three assists for the Coyotes, who are winless in three games under new coach André Tourigny in his first NHL season.

Pavel Buchnevich and Ivan Barbashev also scored for the Blues, who have won the first two games of a season-opening three-game road trip.

“It’s always a little crazier at the start of the year every year,” Bozak said. “It’s a good start for us. Two big wins. Now we have to keep it going. We have lots of depth. That’s one huge thing. Every line can score and contribute.”

“There were four-five shifts there where we were not there mentally,” Tourigny said. “When they scored their second goal, I don't know if we got emotional.”

Jordan Binnington made 22 saves for the Blues. Hutton stopped 15 of 21 shots.

Phil Kessel had two assists for Arizona. He has played in 903 consecutive games, the fifth-longest streak in league history and the third-longest active streak.

Buchnevich was given a five-minute major penalty and ejected with 1:07 remaining in the first period for headbutting Lawson Crouse, whose goal gave the Coyotes a 2-1 lead early in the second.

“Nobody really likes playing each other," Bozak said. “Things get heated out there and things happen that make guys mad. That stuff tends to happen lots, no matter who you are playing.”

Blues: Play at Vegas on Wednesday. They have not opened with three straight on the road since 2006.

Coyotes: Host the Edmonton Oilers and two-time NHL MVP Connor McDavid on Wednesday. McDavid was the unanimous winner of the 2021 Hart Trophy.