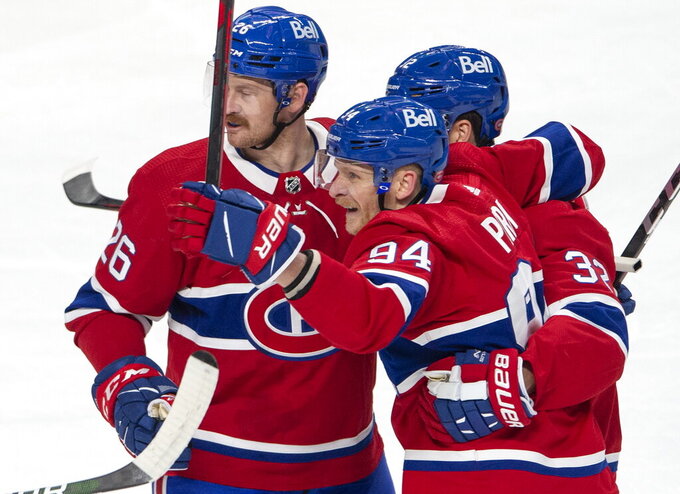 Pietrangelo got a private plane trip to Vegas for an in-person meeting with the Golden Knights when the market opened and got a long-term contract worth over $61 million. Perry waited until December to sign a one-year deal just above the NHL veteran minimum.

Each veteran with Stanley Cup-winning experience has played a key role in helping his team reach the semifinals, a series the Golden Knights lead going into Game 2 at home against the Canadiens on Wednesday.

Coach Peter DeBoer and general manager Kelly McCrimmon called Pietrangelo — whom the Golden Knights made no secret was their top target — the best player during the team’s second-round series against Presidents’ Trophy-winning Colorado, mainly for the work not seen on the stat sheet.

“He played extremely well,” McCrimmon said. “Played big minutes every night. Maybe one of the things that’s not visible to people just watching the game is the poise, confidence, calmness he brings to a team is really valuable."

Those are attributes that DeBoer and McCrimmon said stem from his longevity in St. Louis, where he captained the Blues to the Stanley Cup in 2019.

But the transition wasn't as smooth as the veteran would have liked.

“When you play somewhere a long time and you play a certain style with the same players, it becomes second nature,” Pietrangelo said. “When you go somewhere else, you have to relearn the way guys play and think on the ice. It’s an adjustment. It didn’t always go the way I wanted in the beginning here, but I knew there was the opportunity to continue learning from the coaches and players and to get more comfortable.”

Comfortable enough to bolster the blue line and lead the team during the regular season averaging 24:26 of ice time. He’s kept pace in the postseason with a team-high 24:06 a game.

Pietrangelo is also tied for third on the team with eight points in 14 playoff games, including his first goal of the postseason that broke a tie late in the second period of Game 6, helping Vegas eliminate Colorado.

“This year, point-production number, people focused on too much,” DeBoer said. “His analytics were excellent. When you dug down below the actual stat line — goals, assists, points — his analytics were great. His defensive and offensive metrics were all really good compared to the previous year. We knew there was a real good foundation for his game: the pucks just weren’t going in.”

The puck is going in for Perry this playoffs. He has three goals and four assists to tie for third in scoring on the Canadiens.

But for Montreal interim coach Dominique Ducharme, much like DeBoer with Pietrangelo, it’s more than stats and analytics. It’s the passion, and experience, and leadership that Perry exudes to teammates.

Ducharme said it’s nice to have the 36-year-old to bounce ideas off of, somewhat of an extension of the coaching staff.

“Guys like him, quite often when we talk together, we talk a lot about the mindset of our team, where we’re at, the way we’re thinking, the way we’re reacting,” Ducharme said. “It’s more mental when we talk about things with Corey, Shea (Weber), and those guys when we sit down together. It’s more about those kind of things than really X’s and O’s.

“There’s a reason why he’s been a part of so many teams that won championships. He was a big factor in those things because he can be a difference-maker at the right time."

Perry was on the Dallas Stars that beat Vegas in the Western Conference final in last year's playoffs in the bubble. After 14 years in Anaheim, during which he hoisted the Cup in 2007 and won the Hart Trophy as league MVP in 2010-11, free agency in Perry's mid-30s wasn't easy.

“I didn’t have anything and didn’t know what was going to happen, didn’t know where the future was going to go,” Perry said. “Some things, you just have to wait your turn. And good things happen to people who wait. I was fortunate enough to get the call.”

The call the 16-year veteran got was that he might spend some time on Montreal's taxi squad. He did, bided his time and put up 21 points on nine goals and 12 assists in 49 games, becoming a regular for a team that has made an improbable run.

“I said, ‘No problem, I’ll do whatever I have to do,’” Perry added. “It’s just a matter of waiting your turn.”

NOTES: Ducharme said Tuesday morning that key defenseman Jeff Petry, who hurt his left hand in Game 3 against Winnipeg and did not play in Monday’s opener in Las Vegas, practiced with the team but that it was too early to talk about Wednesday’s lineup.