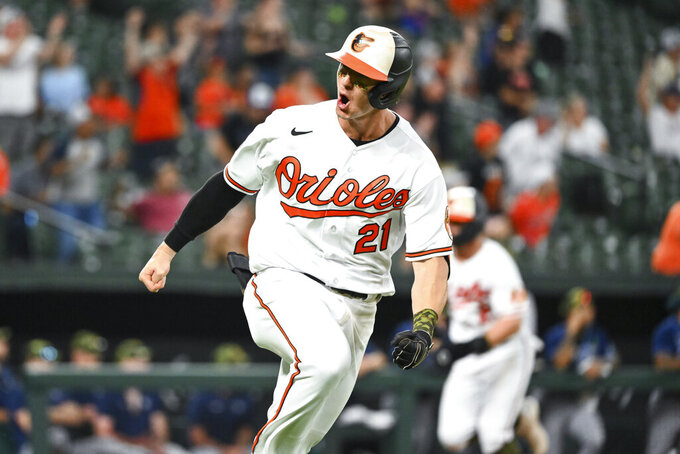 BALTIMORE (AP) — Rougned Odor had his second game-winning at-bat in three days as the Baltimore Orioles beat the Tampa Bay Rays 7-6 in 11 innings on Sunday.

The Orioles won two of three and won a series against Tampa Bay for the first time since July 31–Aug. 2, 2020, when Baltimore managed a three-game sweep at home.

The Orioles trailed 6-4 in the ninth before Austin Hays managed a pinch-hit, two-out, two-run RBI single off Ryan Thompson, who earlier was charged with a balk that moved two runners into scoring position.

Then, a thunderstorm delayed the game for 51 minutes.

Baltimore’s Chris Owings had a successful bunt to move the automatic runner to third in the 11th off Dusten Knight (0-1). Odor followed with a chopper that first baseman Ji-Man Choi mishandled and got past him into right field to plate the winning run. The play was scored a fielder's choice and Odor was granted the RBI.

"I think (Odor) brings a lot of grit and just hard-nosed baseball to this team,” Hays said. “We lost a lot of close games to these guys over the years. A lot of us younger guys that are starting to get some more time now, we're just continuing to fight. We don't want to lose those games anymore. We want to come out on top.”

The Orioles left 16 runners on base, their most since June 13, 2012, against Boston, also leaving 16. Baltimore improved to 4-0 in extra innings.

It was the second time in the three games that the Rays and Orioles went extra innings. On Friday, Odor hit a two-run homer in the 13th inning that gave Baltimore an 8-6 victory, snapping a 15-game losing streak to the Tampa Bay.

Tampa Bay’s Kevin Kiermaier led off for the second straight game and went 2 for 6 with an RBI and two runs. Brett Phillps and Choi also picked up three hits for the Rays.

Orioles top prospect Adley Rutschman was in the lineup for a second straight game and went 1 for 4 with a hit by pitch.

Ryan Mountcastle managed his fifth home run of the season before leaving in the ninth with body cramps for Baltimore, which has lost eight of 10.

It was not an ideal start for the Orioles.

The Rays took a 1-0 lead on a sharp grounder by Choi that hit Orioles’ starter Spenser Watkins and forced him out of the game after three batters with a right forearm contusion. Joey Krehbiel entered for Baltimore and allowed a three-run home to Isaac Paredes that boosted the lead to 4-0.

“Too early to tell,” Watkins said about the injury. “We'll see how it goes in the next day or so. We'll reassess it from there.”

The Rays continued to struggle defensively and a pair of errors on second baseman Vidal Bruján and Arozaren allowed the Orioles to pull within 6-4 in the seventh. Tampa Bay had five errors in the three-game series.

“We had multiple opportunities to win that game,” Rays manager Kevin Cash said. “We just didn’t get it done. The Orioles did.”

Rays: Wander Franco (right quad injury) and Yandy Díaz (left shoulder) were both held out of the lineup but were available off the bench. Franco struck out as a pinch hitter in the 10th. … RHP Andrew Kittredge (low back tightness) was placed on the 15-day IL, retroactive to May 19. … The Rays selected RHP Dusten Knight from Triple-A Durham. To make room, RHP JT Chargois (left oblique tightness) was transferred to the 60-day IL.

Orioles: RHP Jordan Lyles (2-4, 4.11 ERA) will pitch the series opener against the Yankees, who have not named a starter.