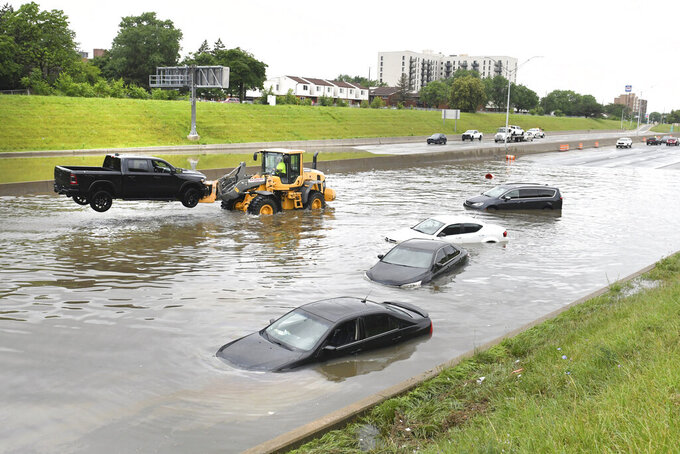 Max Ortiz, ASSOCIATED PRESS
FILE - A truck is hoisted from a flooded Interstate 75 in Detroit, on June 26, 2021. The Michigan Senate on Thursday, Dec. 2, 2021, unanimously approved $3.3 billion in water infrastructure spending to replace lead pipes and repair aging dams around the state while also sending money to a Detroit-area system that has struggled with flooding blamed on climate change. (Max Ortiz/Detroit News via AP, File)

LANSING, Mich. (AP) — The Michigan Senate on Thursday unanimously approved $3.3 billion in water infrastructure spending to replace lead pipes and repair aging dams around the state while also sending money to a Detroit-area system that has struggled with flooding blamed on climate change.

The House will next consider the massive influx of aid, likely in the new year. It includes about $2.4 billion in federal funding — $1.4 billion from the infrastructure law enacted last month and nearly $1 billion from the pandemic rescue law passed in March.

Sen. Jon Bumstead, a Newaygo Republican and sponsor of the spending bill, called it “a step towards ensuring that our state water infrastructure undergoes transformational improvements that will benefit every Michigander for generations to come.”

Senators initially proposed $600 million to replace service lines that can leach lead into drinking water if the supply isn't properly treated. They upped it to $1 billion following the passage of the federal infrastructure bill. Benton Harbor currently is grappling with elevated lead levels in homes.

The Natural Resources Defense Council has estimated that Michigan has 460,000 lead pipes in the ground, which would be the third-most in the country. State regulations, made tougher following Flint's water crisis, generally require that every line be replaced by 2040 — which could cost $2.5 billion in today's dollars.

“This is a huge part of that,” Senate Appropriations Committee Chairman Jim Stamas said of the $1 billion, which is more than triple the $300 million for pipe replacements proposed by Democratic Gov. Gretchen Whitmer. Communities would not have to contribute matching funds to get a grant, he said.

The legislation includes $650 million in state money for a new loan fund for dam owners and $400 million for the Great Lakes Water Authority in southeastern Michigan, which provides water to nearly 40% of the state's population and wastewater services to nearly 30%. June flooding in the Detroit area affected thousands of people. More than $245 million of the $400 million is designated for sewer improvements.

More than one-third of the lending for dams is set aside for a task force that oversees dams and lakes in Midland and Gladwin counties, where a “500-year” flood resulted in the failure of two dams and caused hundreds of millions of dollars in damage to property.

“We look forward to working with both the House and the governor's office to get this across the line,” said Stamas, a Midland Republican. “We have to start somewhere.”

This story has corrected the name of a senator in the story. His name is Jim Stamas, not Tony Stamas.