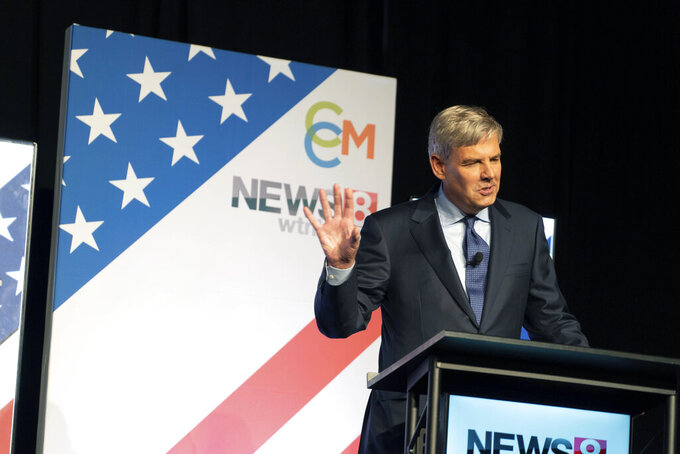 The first-term governor weathered Stefanowski’s accusations that he’s oblivious to the financial toll that inflation and taxes have taken on everyday residents. Lamont instead painted for voters a rosy picture of a state that has successfully emerged from the COVID-19 pandemic, reduced taxes, paid down pension debt and now has a robust savings account.

“Connecticut gets it right. We had a good election, a fair election. Now we all come together, we work together as one. Because that’s what Connecticut always does,” Lamont told supporters in a victory speech in Hartford.

Stefanowski conceded the race shortly after 8 a.m. Wednesday, releasing a statement that acknowledged “the results of this election are not what we had hoped for.” He urged Lamont to support people who voted for him as well as those who didn't.

“Politics has become too divisive and the great people of Connecticut deserve better,” he said in the statement.

During a morning radio interview, Stefanowski acknowledged being surprised by his loss and the overall performance of Republicans.

“I don’t know, I thought it’d be a bigger night for Republicans both nationally and in the state last night. But for whatever reason, it wasn’t,” he said, later adding: "This one’s hard to figure. Maybe the people are happier than I thought. I hope they are.”

The two rivals presented starkly different views of public safety in Connecticut. Stefanowski called crime in Connecticut “out of control,” echoing a message from Republicans across the country, and proposed overhauling parts of the 2020 police accountability law which he said is to blame for challenges recruiting more police officers. Lamont has countered with statistics that show a 3% reduction in overall crime between 2020 and 2021, saying it’s a positive trend despite political “fearmongering.”

Voters have been deluged with TV ads paid for by various political action committees as well as the candidates themselves, who’ve each invested millions of dollars of their own money in the race.

The last Republican governor in Connecticut was M. Jodi Rell, a moderate who served until January 2011.

Democrats focused heavily on the abortion issue, in light of the overturning of Roe v. Wade. They hoped to drive abortion-rights supporters to the polls in a state where abortion is legal with restrictions. Stefanowski calls himself “pro-choice,” but Democrats argued he can’t be trusted to protect Connecticut’s laws.

Former President Donald Trump backed Stefanowski in his 2018 run, but he did not weigh in on this year’s race. Also, Stefanowski didn’t seek a rating from the National Rifle Association. In 2018, he received an A rating. Lamont has received an F for 2022.

Lamont, a former cable TV entrepreneur, spent more than $20 million of his own money, exceeding the $15 million he spent in 2018. The national parties and various political action committees also dumped large sums into negative ads.

A mergers and acquisitions expert, Stefanowski loaned his campaign $12 million, more than triple his investment in the 2018 race.