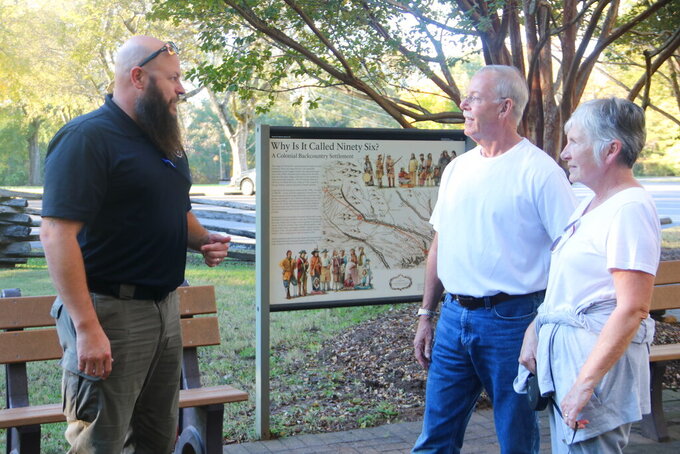 NINETY SIX, S.C. (AP) — Rolling mounds of earth spread out before Joshua Manley on his first day as the Ninety Six National Historic Site’s superintendent — 245 years worth of American history baked into the soil.

Only grassed-over earthworks remain of the Star Fort that played host to the first Revolutionary War land battle south of New England, in 1775. But Manley saw more than the paved trail, historical markers and mocked-up rifle tower.

History is baked into every inch of the park, including the history of maintenance efforts and old trails in the woods that are now closed off. At one point the cleared lawn of the Star Fort site used to be covered in trees, Manley said. They were clear cut to provide a clearer view of the battleground, but seeing photos of woods crowding over the fort gave Manley a different picture of the battlefield’s natural history.

Even the path leading park guests around the fort was only paved in the past two years. Manley seems to see history’s potential throughout the park; those woods were home to the Cherokee people long before Maj. Gen. Nathanael Greene led 1,000 patriots in a siege against the loyalist troops at Star Fort.

“This site was well used before the Revolution ever happened,” Manley said. “This place isn’t important just because a bunch of white people settled here. A lot of people have stories here.”

Manley grew up in southwest Ohio and joined the U.S. Army when he was 17 years old.

“As a kid, I didn’t go to national parks at all. I think the first time I went to a national park was in my early 20s,” he said. “I remember being kind of upset. Why didn’t I grow up here?”

After six years of military service, Manley wanted to start a career and settle down with his then-girlfriend, now-wife, Lucy. After some time working for baseball leagues and university athletics departments, he and his wife took a vacation to colonial Virginia.

“I had written my senior thesis on Jamestown, the original settlement,” he said. “My wife said ‘I know what you should do.’”

He put his history degree to work and applied for various federal jobs, landing a role in 2014 as part of the National Park Service’s 21st Century Ranger program. The unit was intended to create well-rounded rangers with a breadth of experience.

In just a few years, Manley worked in incident management, then fire communications and education for all three NPS regions on the East Coast. He supported regional and local fire offices and put together educational programs from Maine to Florida, and as far west as Alabama. He served as a firefighter at Big Cypress National Preserve in Florida.

“I’ve had great mentors, great supervisors and a lot of people willing to point me in the right directions,” he said.

He eventually moved with his family to western Pennsylvania, where he served as a management analyst for five associated parks. When he and his family were ready for a change of scene, they started looking for their new home and Manley looked for a new park to serve.

Manley moved here on Oct. 21, though his wife and children are still in Pennsylvania. He remembered a road trip he took when Max was 5 and Stella 2, driving from Philadelphia to Yellowstone and back. They stopped at nine national park sites and the children still talk about this trip today.

“For me, professionally and personally, for myself and for my family, it felt like if you put a map out, all the lines would still end up here,” he said.

Manley’s son, Max, loves riding his dirt bike. He wanted his son and daughter, Stella, to grow up with the wilderness he missed out on as a child. Manley himself is a bass fisherman and had been down to fish in Lake Murray before. Once they started looking in this area, it didn’t take long to find their new home.

IF YOU BUILD IT

Manley has an ambitious vision for the park, and the Ninety Six and greater Greenwood County communities play a big role in that.

“I see a lot of opportunity in working with people who can help us identify the missing pieces in the untold stories here,” he said. “There’s a lot of history we can dive into of how the Native Americans used this land. My long-term vision her is getting involved more with the community.”

Soon after starting the job, he met with town officials in Ninety Six to express his interest in a stronger partnership, and set up a meeting with county tourism staff. He wants to partner with them for the upcoming 250th anniversary commemorating the first battle at the site, set for November 2025.

But the daily operations of the park are essential to building strong ties in the community, and Manley said he couldn’t ask for better staff. Gray Wood and George McCarty do a monumental job maintaining the park grounds, and he said Ranger Adrian Stewart is eager to greet guests and plan educational events. The park has other helping hands, such as visitors service assistants Sydney Shepard and Matthew Grubb.

“I’ve been to national parks with three or four times the staff that don’t look nearly this nice,” Manley said.

McCarty has worked at the park for about 20 years. He said he got the job while unemployed and looking for work, and was an intermittent worker for only a few days a week at first. He stuck with it though, for what he said was one of the best benefits.

“I worked for Greenwood Mills for 30 years. Sometimes you’d not see the sunshine all day,” he said. “It’s kind of rewarding that you know you’re taking care of a place where the first American soldiers gave their lives.”

When he’s not cutting grass, mowing weeds or pruning trees, there’s usually maintenance matters to attend to. Like any job, he said there’s some routine but often he’s moving from task to task quickly.

“Nobody can do it by themselves, it’s got to be a team effort,” McCarty said.

Inside the visitors center, Stewart staffs the front desk and helps answer guests’ questions. She joined the National Park Service after two college internships at parks that got her interested in teaching the public the stories these parks preserve. Her father is a big Revolutionary War history buff, and she said she was familiar with the Ninety Six site from a childhood visit, but didn’t remember much about it when she took the job as ranger there seven years ago.

“When I finally came as an adult, I just thought it’s so nice and quiet, but there’s such an in-depth story,” she said. “It opens up the opportunity for a lot of variation in programs and interpretations.”

Part of her job is to educate the public about the park’s history, and she plans and coordinates events at the park to teach it. As a volunteer coordinator, she also works with living historians to bring those stories to life for guests.

“You can kind of see it in people’s faces when it clicks for them. I love seeing that lightbulb flick on,” she said. “That little spark is very encouraging.”

Stewart is eager to find more ways to get people involved and engaged with the park, which Manley said is perfect given his interest in finding more volunteers. He wants to look at after-school programming for local students, and to encourage field trips and outdoor learning opportunities. He said he wants to start a “Friends of Ninety Six” park group that will serve as the park’s official philanthropic partner with passionate volunteers who will take responsibility for highlighting this public land. Opportunities seem to be everywhere, Manley said, and he’s eager to see what park staff can make of them.

“There is just so much history around us here,” Stewart said. “If you take a moment and dive a little bit deeper, you can find something you will somehow connect to.”