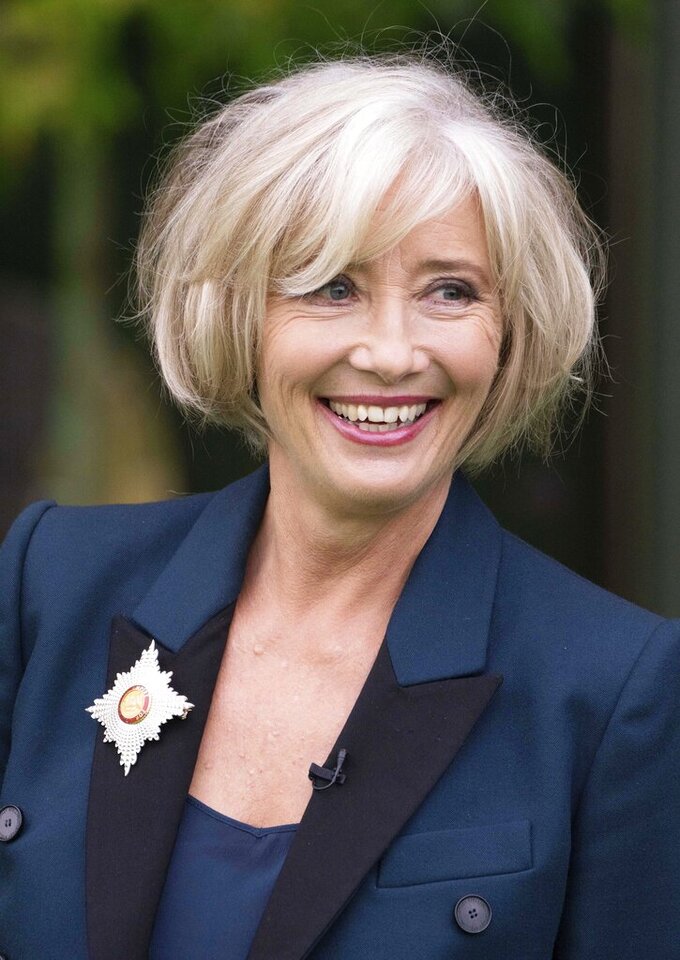 NEW YORK (AP) — The summer movie season has not, traditionally speaking, been known for its nuanced attention to female sexuality.

But smack in the middle of Hollywood’s high season of masculine thrill rides and sci-fi fantasies this year is “Good Luck to You, Leo Grande,” a compassionate comedy in which Emma Thompson stars as a widow seeking romantic excitement with a suave sex worker, played by newcomer Daryl McCormack. The film, a Searchlight Pictures release to debut June 17 on Hulu, is an intimate two-hander coursing with many seldom discussed issues of sexuality and shame, pleasure and repression.

“It’s like a little atom bomb,” says Thompson, speaking by Zoom from Scotland. “As it divides the cell, it reaches people who are very energized by it because there’s so much to talk about. It pushes so many particular buttons in our minds."

“Good Luck to You, Leo Grande,” directed by Sophie Hyde and penned by Katy Brand, takes place almost entirely in a London hotel room where Nancy (Thompson) and Leo (McCormack) meet on four occasions. Nancy, a religious studies teacher, has never had an orgasm. She has deep-seated insecurities about her body and, up to this point, has spent a lifetime suppressing her own desires. Leo, on the other hand, is calmly well-adjusted and believes unapologetically in giving satisfaction to others.

To Thompson, “Good Luck to You, Leo Grande” is nothing less than revolutionary in its willingness to be candid about topics usually brushed under the covers.

“Let’s face it, women’s pleasure has never been, as it were, top of the to-do list in present systems," says Thompson. "It’s never been: Oh, we really must attend to that."

It's a startlingly open, probing performance by the 63-year-old Thompson whose screen presence has long exuded, as The New York Times once aptly summarized, “an ironclad sense of self and how things ought to be.” But whereas many of Thompson's most iconic roles ("Howard's End," “Remains of the Day,” “Sense and Sensibility") have situated her intelligent, empathetic moral clarity in more buttoned-down characters, “Leo Grande” proves she's just as clear-eyed when it comes to matters of sex and pleasure.

“I’ve always trusted physical pleasure, as long as it felt right in the emotional centers of the body. I never thought that’s the wrong thing to do," says Thompson. “Pleasuring yourself is fantastic. That’s just extraordinary that one can do that. If you think about the history of masturbation, it’s simply appalling what was done it by Christian faith, and I’m sure other faiths. The fact that it outlawed pleasure for the self, for the body, seems to me to be deeply, deeply problematic and a terrible sin, a real evil thing to do to human beings. We’re designed to experience pleasure, clearly."

Thompson has, she says, been thinking about the issues behind “Leo Grande” for years and years. When the script arrived, the role, she says, “struck me in the same way Margaret Schlegel struck me when I was 30," referring to her Oscar-winning performance in James Ivory and Ismail Merchant's 1992 period drama “Howard's End." Years ago, Thompson made a handbook for her daughter as a guide to discussing sex apart from the way it's been categorized, warped or minimized by society.

“We find it difficult to be honest about sex. It’s difficult to talk about. It’s been made somewhat taboo, and at the same time, it’s been industrialized and sold to us like Spam in a tin,” says Thompson. “I was talking about the pleasure centers in the brain, in the body and in the heart. They’re very, very important because it’s not just one. It’s quite rare for all of those things to be stimulated in the right way at the same time. We’re so complicated, aren’t we, and we’re so unwilling to recognize that complication just because it makes life more difficult. But actually in the end, it makes life more interesting."

When McCormack was potentially up for the part, the 29-year-old Irish actor best known from “Peaky Blinders” went to meet Thompson at her home in London. They spent two hours talking on a park bench. The next morning, she texted him the message, “I'll see you on set.”

“She was out on the front door step talking to one of her neighbors. I think she was finishing up some gardening,” said McCormack. “I just remember her seeing me and being so cordial and welcoming. It felt like something clicked. She brought me inside. I needed to use her loo, her bathroom. I used her bathroom under the stairs. That’s where she keeps her two Oscars.”

“I quickly understood there was no pretense with her,” he adds. “I felt her passion for this instantly.”

Though “Leo Grande” was shot quickly in just 19 days, the actors rehearsed beforehand, including some time spent acting nude. The process of making the movie unfolded for Thompson and McCormack as an unusually deep experience of connection and unburdening. Thompson calls one acting exercise — in which she attempted to stand naturally, without judgement, naked before a mirror and posed like Eve in Albrecht Dürer's Renaissance painting — the hardest acting challenge she's ever had.

“I thought: That’s the position I’d like to stand in. A completely innocent position,” says Thompson. “I’m not moving my body about to make it look better or more like the thing I think it ought to look like. I need to be completely relaxed. And I realized that was virtually impossible.”

Thompson is the only person to win Academy Awards for both acting and screenwriting. She penned Ang Lee's “Sense and Sensibility” and a pair of “Nanny McPhee” films. (In Scotland, Thompson was at work writing a musical adaptation of “Nanny McPhee.”) Though she found the roles offered to her in her 40s largely disappointing, a dearth that partly prompted her screenwriting, Thompson considers the roles she's played in her 50 and 60s “by far the most interesting things I've ever done.” That's much due to another generation of women filmmakers, like Brand and Mindy Kaling ( who directed her in 2019's “Late Night” ), writing films for her.

“These young women have seen something, not necessarily in me,” says Thompson. “I suppose that's just being given those opportunities and being perennially interested in the condition of women.”