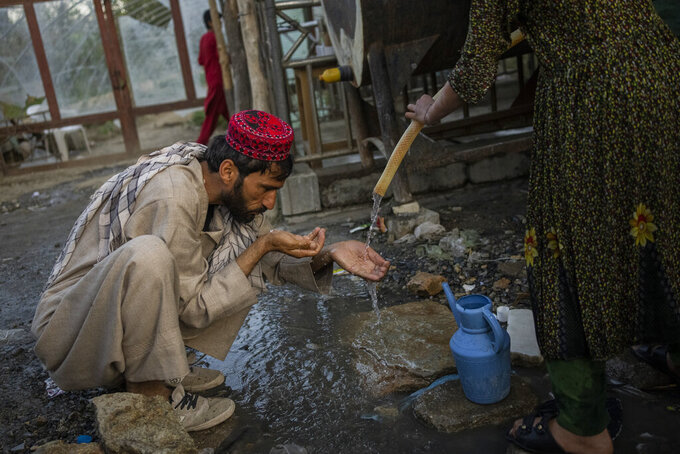 KANDAHAR, Afghanistan — Impoverished Afghans living in a long-abandoned military compound in the southern city of Kandahar say they’re devastated by the Taliban order to expel them from their homes.

Several hundred staged a rally against the order on Monday, saying they have nowhere else to go and that they had years ago paid former Afghan soldiers under the table for the land.

The Taliban came to the compound after the rally and forced several of the protesters to leave. Their current whereabouts are not known.

Rabia, an Afghan widow who goes by one name, says she lives in a two-room mud house in the compound with her five children. She told The Associated Press she will stay put until the Taliban provide her with another place to live.

“The Taliban want me to leave everything I built and bought behind, where would I go with my children?” she said.

The Taliban have ordered over 2,500 families in the compound to leave their houses and all their belongings so that Taliban fighters can move in.

“The families have received a deadline to leave with just the clothes on our back as soon as possible” said Imran, another resident of the compound.

Fazil Mohammad, one of the first Afghans who settled in the compound said has no money to go somewhere else. “I cannot even afford a tent now to move into that.” He said he was happy when the Taliban took over, citing corruption of the previous government, but that he is now disappointed.

The compound was abandoned in 2001, after the U.S.-led invasion to oust the Taliban, when Afghan soldiers who lived there moved into facilities at the Kandahar airport. Over the years, the compound grew as displaced Afghans settled there, bought pieces of land and built houses.

The Taliban media chief for Kandahar, Rahmatullah Naraiwal, said Wednesday that the Afghan families may continue living in the compound, pending a review of the matter by the Taliban leadership.

However, he said they are not allowed to hold rallies and that their protest was illegal. The Taliban are prepared to pay them but cannot provide them with an alternative place to stay, he added.

“Pakistan is in no condition right now to accept any more refugees,” Moeed Yusuf told a news conference in the capital, Islamabad. He said Pakistan is already hosting more than 3 million Afghan refugees who had fled the war and violence in their country over the past decades.

Yusuf said Pakistan will try to do whatever is possible to help Afghans, but that international efforts should step up to prevent a humanitarian crisis. He asked the world community not to repeat the past mistake of abandoning Afghanistan.

Yusuf also warned that the Islamic State group and other militants — including the Pakistani Taliban who have sought refuge across the border — could exploit such a situation.

“You don’t need to think too much to know what will happen. There will be a security vacuum. You already know ISIS is present there, Pakistani Taliban are present there, al-Qaida is there,” he said, adding that these groups are sworn enemies both of Pakistan and the West.

“If Afghanistan destabilizes the spillover effect comes to Pakistan,” he said. Yusuf also asked the international community to constructively engage with the Taliban for the sake of peace and stability in the region.

BEIJING — China says it is maintaining contact between its embassy in Afghanistan and the Taliban and is calling for Afghan government funds held abroad to be unfrozen.

“We stand ready to maintain communication with the new Afghan authority,” Zhao said.

China has yet to say whether it will recognize the Taliban government, but has been actively courting its top officials, hosting a delegation led by its political leader Mullah Abdul Ghani Baradar in July, shortly before the group swept to power amid the withdrawal of U.S. forces and the mass exodus of Afghans fearing a return of the Taliban’s hard-line Islamic rule.

China has also been sharply critical of the nature of the pullout, and, while wary of the rise of radicalism on its western border, has been generally supportive of the group seen as defeating its strategic rival, the United States.

Afghanistan is now teetering on the edge of economic collapse and while China has offered support, its not clear when or how it will deliver.

Last week, the Taliban announced an all-male interim government but the exclusion of other political factions and women has made it unlikely that they will win broad international support or international recognition as the legitimate leaders of Afghanistan.

Without such recognition, the Taliban will be unable to tap billions of its funds frozen abroad, almost all of it contributed by the U.S. and other foreign donors.

Zhao said those funds should be unfrozen and handed over to the Taliban. “Those assets belong to Afghanistan and the Afghan people,” Zhao said.

“The U.S. should face up to Afghanistan’s justified and reasonable appeals, abandon imposition of sanctions and pressure and not hinder Afghanistan’s economy, livelihood and peaceful reconstruction,” Zhao said.

ISLAMABAD — Members of Afghanistan’s women soccer team and their families arrived in Pakistan after fleeing their country in the wake of the Taliban takeover, local media said Wednesday.

It was unclear how many Afghan women players and their family members were allowed to enter Pakistan.

However, Pakistan’s English-langue The DAWN newspaper reported that the Afghan female soccer players were issued emergency humanitarian visas following the Taliban takeover of Kabul amid fears that the Taliban would not want women to participate in sports.

The Taliban have not commented on the development, but an official confirmed that under their government’s interpretation of Islam, women are not allowed to play any sports where they could potentially be exposed. The official was not authorized to speak with the media before any official announcements.

Last week, the Taliban announced an all-male interim government for Afghanistan stacked with veterans of their hard-line rule from the 1990s and the 20-year battle against the U.S.-led coalition. The move seems unlikely to win the international support the new leaders desperately need to avoid an economic meltdown.

THE HAGUE, Netherlands — The Dutch foreign ministry says it is evacuating nearly 150 people from Pakistan who fled from Afghanistan.

The Dutch government says Wednesday’s flight will pickup nearly 50 people with Dutch nationality and their Afghan families as well as Afghans who worked closely with the Netherlands in Afghanistan — mainly translators.

The government in The Hague has faced criticism in recent weeks for not acting earlier to evacuate Afghans who worked with the government over the past 20 years.

Many such Afghans fear persecution following the Taliban’s swift march to power.

The charter flight also will pick up nearly 100 other people who will fly on from Amsterdam to other European nations.