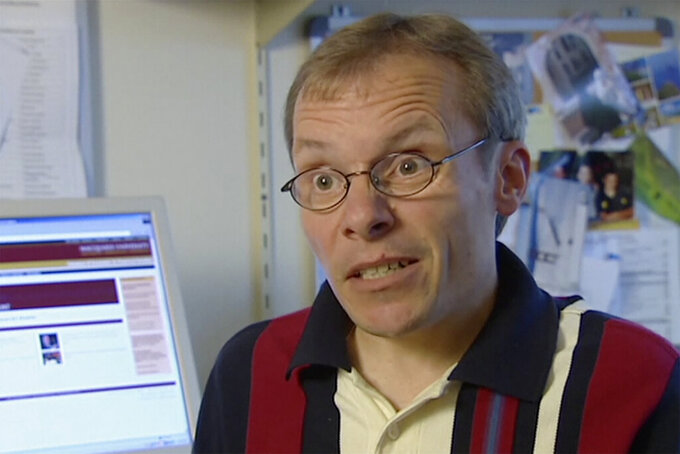 Uncredited, ASSOCIATED PRESS
FILE - In this image taken from video, Sean Turnell, an economist at Australia's Macquarie University, speaks during an interview at his university office in Sydney., Nov. 25, 2005. Turnell, who is being tried with Myanmar's ousted leader Aung San Suu Kyi for violating the country's official secrets law, testified in court for the first time on Thursday, Aug. 11, 2022, a legal official said. (Australian Broadcasting Corporation via AP, File)

BANGKOK (AP) — An Australian academic who is being tried with ousted Myanmar leader Aung San Suu Kyi on charges of violating the country’s official secrets law testified in court for the first time on Thursday, a legal official said.

Sean Turnell, an economist at Sydney’s Macquarie University, had served as an adviser to Suu Kyi, who was arrested when her elected government was ousted by the army on Feb. 1 last year.

He was arrested five days later and is now being held in the main prison in Naypyitaw, the capital, as is Suu Kyi. Three of Suu Kyi’s former Cabinet members are being tried with them in a special court at the prison.

A legal official familiar with Thursday’s proceedings said Turnell denied the allegations against him and pleaded not guilty. Further details of his testimony were not available because his lawyers have been barred from talking about the case. All of the trials involving Suu Kyi have been held under similar restrictions, with the proceedings closed to the media and the public.

The legal official, who spoke on condition of anonymity because he is not authorized to release information, said Turnell and his co-defendants appeared to be in good health.

The exact details of the alleged offense in the case have not been made public, though Myanmar state television, citing government statements, said last year that Turnell had access to “secret state financial information” and had tried to flee the country.

The judge adjourned Thursday’s proceedings until next week, when Suu Kyi is to testify.

The case is one of many faced by Suu Kyi and is widely seen as an effort to discredit her to prevent her return to politics. The charges against her include corruption and election fraud. She has already been convicted of several minor offenses.