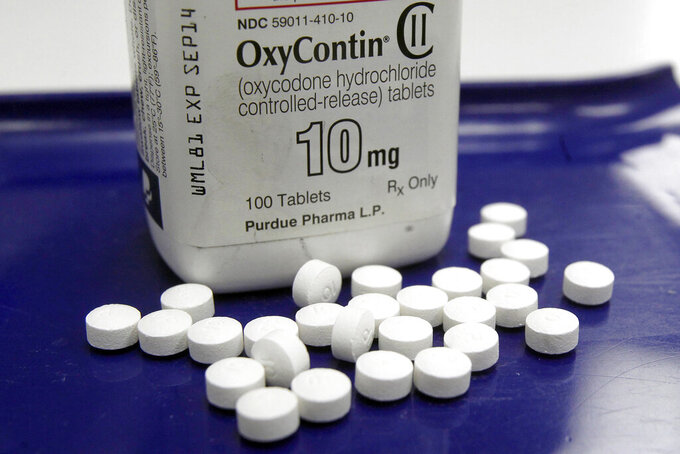 Toby Talbot, ASSOCIATED PRESS
FILE - This Feb. 19, 2013, file photo shows OxyContin pills arranged for a photo at a pharmacy in Montpelier, Vt. A judge formally approved a plan Friday, Sept. 17, 2021 to turn OxyContin maker Purdue Pharma into a new company no longer owned by members of the Sackler family and with its profits going to fight the opioid epidemic. A U.S. bankruptcy court judge signed the plan Friday, more than two weeks after giving it preliminary approval. (AP Photo/Toby Talbot, File)

A judge formally approved a plan Friday to turn OxyContin maker Purdue Pharma into a new company no longer owned by members of the Sackler family and with its profits going to fight the opioid epidemic.

U.S. Bankruptcy Judge Robert Drain officially confirmed the reorganization Friday, more than two weeks after he announced he would do so pending two largely technical changes to the plan presented by the company and hashed out with lawyers representing those with claims against the company.

His confirmation took more than six hours to read in court earlier this month, and the written version is 159 pages long, full of reasoning that appeals courts can consider later. Several states among other parties have already appealed the decision.

The deal resolves some 3,000 lawsuits filed by state and local governments, Native American tribes, unions, hospitals and others who claimed the company's marketing of prescription opioids helped spark and continue an overdose epidemic linked to more than 500,000 deaths in the U.S. in the last two decades.

The plan will use company profits and $4.5 billion in cash and charitable assets from members of the Sackler family to pay some individual victims amounts expected to range from $3,500 to $48,000, and help fund opioid treatment and prevention programs across the U.S.

Members of the Sackler family are also required to get out of the opioid business worldwide in time.

Millions of company documents, including communications with company lawyers, are to be made public.

The changes are to take effect when the bankruptcy process is finalized; the earliest that could be is in December.

The attorneys generals from the states of Connecticut, Maryland, Washington and the District of Columbia, as well as the U.S. Bankruptcy Trustee have all announced appeals. Their chief objection is that members of the wealthy Sackler family would be granted protection from lawsuits over opioids.

For many people in recovery from opioid addictions or who have lost loved ones to overdoses, the deal is infuriating.

Ellen Isaacs, a mother whose son died from an overdose, filed court papers requesting Drain not accept the plan. At a hearing on Monday, she gave a passionate some sometimes tearful 40-minute speech on her request. Like other activists, she asserted that Sackler family members — who have never been charged with criminal wrongdoing — are getting away with crimes, and that politicians and courts are not doing enough to end the opioid epidemic.

“The attorneys are playing games on paper and humans are dying,” she said.

Drain said the money from the settlement would help avert more deaths, even if it will come too late for Isaacs' son.

“I did not become a judge to get things wrong,” he told her.

He stood by his confirmation of the plan.

At the hearing, Drain also said he would approve a request from Purdue to use nearly $7 million to start setting up the funds that will distribute settlement money to victims, government entities and others. He also, for the third year, approved a plan of incentive payments for Purdue executives if they meet certain goals.