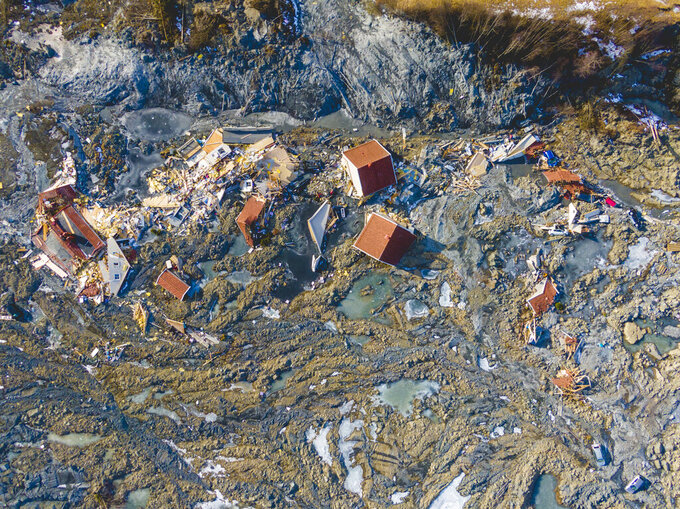 Stian Lysberg Solum, ASSOCIATED PRESS
FILE - IN this Tuesday, March 8, 2021 file photo, an aerial view of the area where a large landslide destroyed several homes in Ask, Norway. Nearly three months after one of the worst landslides in modern Norway’s history, search teams have found the last remaining body in the rubble, authorities said Monday, March 22, 2021. In total, 10 have been found dead in the landslide, which swept away homes in a residential area in the village of Ask on Dec. 30. (Stian Lysberg Solum/ NTB via AP, File)

COPENHAGEN, Denmark (AP) — Nearly three months after one of the worst landslides in modern Norway’s history, search teams have found the body of the last person listed as missing in the rubble, authorities said Monday.

In total, 10 people were killed in the landslide, which swept away homes in a residential area in the village of Ask on Dec. 30.

Seven of the victims were found shortly after the landslide and three people were reported missing. Two bodies were found on Feb. 9.

The landslide destroyed at least nine buildings with more than 30 apartments in the village, with about 5,000 residents located 25 kilometers (16 miles) northeast of Oslo.

Authorities called off search and rescue efforts on Jan. 5, declaring that there was no hope of finding any survivors.

Police spokeswoman Mari Stoltenberg said remains of the last victim, who has not been identified, were found under quick clay, which can rapidly change from solid to liquid form when it is disturbed.

The exact cause of the landslide isn’t yet known. However, combined with excessive precipitation and damp winter weather, the quick clay may have contributed to the disaster.

In 2005, Norwegian authorities warned people not to construct residential buildings in the Ask area, saying it was “a high-risk zone” for landslides, but houses were built there later in the decade.