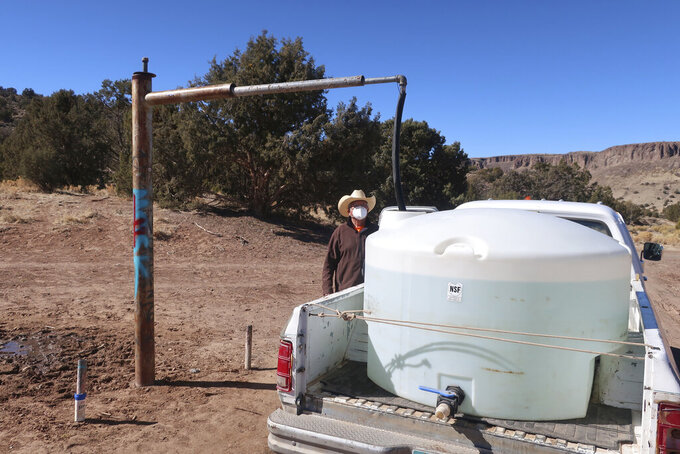 Felicia Fonseca, ASSOCIATED PRESS
FILE - Phillip Yazzie waits for a water drum in the back of his pickup truck to be filled in Teesto, Ariz., on the Navajo Nation, on Feb. 11, 2021. A massive infrastructure bill that President Joe Biden signed this week includes billions of dollars to address long-standing issues with water and sanitation on tribal land. (AP Photo/Felicia Fonseca, File)

FLAGSTAFF, Ariz. (AP) — Tribes welcomed an infusion of money in the massive infrastructure bill to expand broadband coverage, fix roads and address water and sanitation needs, but they say real change will come only with sustained investment.

President Joe Biden signed the $1.2 trillion deal earlier this week that includes about $11 billion in benefits for Indian Country, according to the U.S. Senate Committee on Indian Affairs. About one-third of that, $3.5 billion, will go to the Indian Health Service, the federal agency tasked with providing healthcare for more than 2 million Native American and Alaska Natives.

The funding is enough to address more than 1,560 projects on the agency's list of water and sanitation deficiencies in 12 regions, estimated to cost nearly $2.6 billion. Projects in Alaska and the Southwest region that covers the Navajo Nation — where many tribal members live without running water and indoor plumbing — collectively have the largest price tags.

“In these and several other tribal communities, sanitation and clean water systems would never be built because the annual appropriations were insufficient to cover all the deficiencies,” the National Indian Health Board said Wednesday.

Indian Health Service spokeswoman Jennifer Buschick said the agency will consult with tribes soon to determine how to allocate the funding.

Another $2.5 billion will go to fulfill tribal water rights settlements that already have been approved. The Interior Department hasn't specified which agreements that quantify tribes' rights to water are included. But the leaders of the Navajo Nation, which extends into parts of Arizona, New Mexico and Utah, and the White Mountain Apache Tribe in eastern Arizona said they expect to benefit from the funding.

Heather Tanana, who is Navajo and an assistant law professor at the University of Utah, is part of a group that released a roadmap Tuesday on how the federal government can move forward with the funding effectively. It includes coordination among federal agencies, working with tribes and through an existing tribal task force.

Officials with the Biden administration repeatedly referred to a “whole of government" approach this week during the White House Tribal Nations Summit in announcing agreements among federal agencies on tribal treaty rights and sacred sites.

Tanana, the research lead for the Tribal Clean Water initiative, said goals and accountability also must be part of the equation, along with building capacity for tribes to operate water and sanitation systems on their own. The group of tribal members, water experts and nonprofits pushes for access to clean water for tribes in the Colorado River basin and beyond.

“Whole of government shouldn’t just be a catchy phrase,” Tanana said. “It’s critical to getting the money that Congress just appropriated on to the ground and into actual projects.”

Building and improving upon water and sanitation systems will have a cascading effect in tribal communities and urban areas where most Native Americans live, improve health disparities and foster economic development, the National Indian Health Board said. The group also said the momentum should continue with Congress fully funding health care facilities serving Indigenous people as part of the federal government's obligation to federally recognized tribes.

Colorado U.S. Sen. Michael Bennet, who had co-sponsored a separate bill to improve water and wastewater systems in Indian Country, said: “This is the first step of many to reduce this shameful disparity and help ensure that tribal communities have access to safe, clean water."

U.S. Sen. Lisa Murkowski of Alaska said the infrastructure funding is not inconsequential but is long overdue.

“It’s been decades that we’ve been talking about eliminating the honey bucket and getting clean drinking water into communities, and sanitation systems," she said, referring to lined buckets used to collect human waste in many isolated Alaska Native villages that lack indoor plumbing.

“A flush toilet is not too much to ask in this day and age,” Murkowski said.

Tribal leaders told the Biden administration during the virtual summit that they appreciated the money in the infrastructure bill but pointed out some potential hurdles, including for tribes that don't have the resources to compete for grants or match the funding.

“Why can't tribes just receive the funding?” said Janet Davis, chairwoman of the Pyramid Lake Paiute Tribe in Nevada. “Why do we have to write grants to be able to use it, so we can use it for our communities to be safe?"

Navajo President Jonathan Nez suggested federal policies and regulations be eased or updated so projects won’t be stalled. He cited needing environmental clearances from two different federal agencies when a U.S. Bureau of Indian Affairs road or bridge is constructed on the reservation.

“A failure to clear out some of the burdens that prevent infrastructure investment will mean all our efforts to help pass the infrastructure bill may not lead to the progress we want for our people,” Nez said. “What’s the point of giving us money if regulations make it almost impossible to spend it?”

White Mountain Apache Chairwoman Gwendena Lee-Gatewood said lasting differences will come only with sustained investments to make up for decades of underfunding and neglect.

“We hope this administration will continue to focus on the critical needs and keep its foot on the gas in future budget years,” she said during the two-day summit that wrapped up Tuesday.

Biden administration officials said they would work to address the tribes’ concerns.

Associated Press writer Becky Bohrer in Juneau, Alaska, contributed to this story. Fonseca is a member of the AP's Race and Ethnicity team. Follow her on Twitter at https://twitter.com/FonsecaAP.