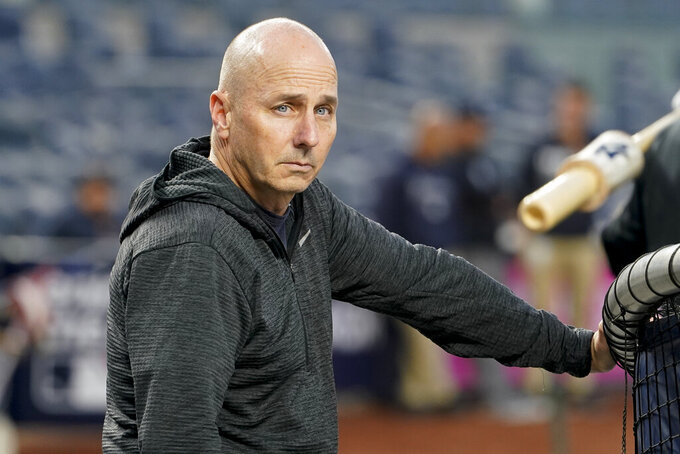 “Optimally, if you could wave a magic wand, we would secure Aaron Judge and retain him and have him signed and happy in the fold as soon as possible,” Cashman said. “He's a free agent. He's earned the right to be a free agent. So he’ll dictate the dance steps.”

Likely headed to the AL MVP award, Judge hit an American League-record 62 homers with a .311 batting average and 131 RBIs this season. On the eve of opening day, he turned down the Yankees' offer of a contract that would have paid $213.5 million from 2023-29.

“Hopefully there’s going to be some opportunities that pop up, including retaining our superstar," Cashman said. “Every individual situation is different, but, generally, yes, it usually takes some time.”

The Yankees had a $254 million payroll as of Aug. 31, third in the major leagues behind the New York Mets and Los Angeles Dodgers, and are headed toward a luxury tax of about $9.4 million. Final figures will not be compiled until next month.

Cashman said owner Hal Steinbrenner had not yet determined a payroll budget.

“I don’t have any firm number just yet, but I also think that we’ll get a lot more information over the course of the coming weeks from our free-agent engagement,” Cashman said.

Cashman couldn't say whether that revenue would mean more money for payroll.

“I’m the director of spending. I have no idea about how the other side of it works, to be honest,” Cashman said.

In discussing areas of need, Cashman made an interesting comment that could indicate the Yankees might be looking to trade Aaron Hicks. Or they may not view him as a viable everyday option anymore.

Harrison Bader appears set in center and is eligible for salary arbitration. Hicks, who hit .216 with eight homers and 40 RBIs, is signed for three more seasons at $30.5 million.