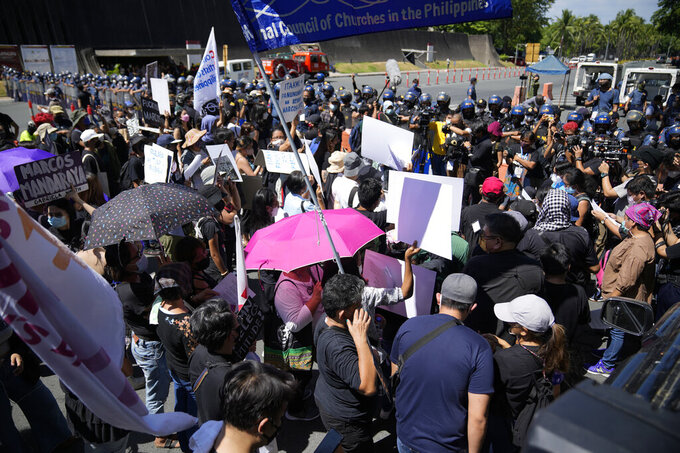 Aaron Favila, ASSOCIATED PRESS
Protesters are blocked by police during a rally against presidential frontrunner Ferdinand "Bongbong" Marcos and running mate Sara Duterte, daughter of the current president, during a rally in Pasay, Philippines, Friday, May 13, 2022. Allies of the Philippines' presumptive next president, Ferdinand "Bongbong" Marcos Jr., appear set to strongly dominate both chambers of Congress, further alarming activists after the late dictator's son scored an apparent election victory that will restore his family to the seat of power. (AP Photo/Aaron Favila)

MANILA, Philippines (AP) — Allies of Ferdinand Marcos Jr., the presumptive next president of the Philippines, appear set to dominate both chambers of Congress, further alarming activists after the late dictator son's apparent election victory restored his family to the seat of power.

Ongoing counts from Monday's vote show they're set to capture most of the 300-seat House of Representatives and half of the 24-seat Senate that was up for election, and likely their top leaderships. Their family members and siblings have been also proclaimed winners in local posts, reflecting the strong grip of political dynasties on the Southeast Asian democracy despite a constitutional prohibition that was never enforced.

“It’s going to be problematic because an opposition is very much needed in a democracy,” said Jean Franco, a political science professor at the state-run University of the Philippines. “There has to be alternative ideas and there has to be monitoring of what the executive is doing, otherwise, we will be like North Korea.”

The electoral triumph of Marcos Jr. and his allies is an astonishing reversal of the army-backed but largely peaceful “People Power” revolt in 1986 that forced his father out of office following years of massive human rights atrocities and plunder that his son never acknowledged.

Marcos Jr. had more than 31 million votes in the unofficial count in what’s projected to be one of the strongest majority mandates for a Philippine president in decades. His vice-presidential running mate and daughter of the outgoing populist leader, Sara Duterte, appeared to have also won with a massive margin.

U.S. President Joe Biden and Chinese President Xi Jinping were among the world leaders who have congratulated them on their huge victory and the relatively smooth conduct of the elections. The separately elected president and vice president are set to take office on June 30 for a single, six-year term after Congress confirms the results.

“It’s like a storm surge, a tsunami in Congress for the opposition,” left-wing House Rep. Carlos Zarate, whose nine-year term ends in June, told The Associated Press. “The challenge for the broad opposition is not to concede but to press the fight for good governance, accountability and democracy wherever it takes.”

The small fraction of a left-wing opposition bloc would likely be trimmed further in the incoming Congress largely due to a military campaign to link it to communist guerrillas, Zarate said.

Hundreds of students and anti-Marcos activists protested alleged election fraud, including the breakdown of some voting machines, but riot troops blocked them from getting close to a main vote-counting center in metropolitan Manila.

Separately, Vice President Leni Robredo, a human rights lawyer who was Marcos Jr.‘s closest challenger, told thousands of supporters at a thanksgiving rally Friday night “to accept the decision of the majority.” She urged her supporters, some of them wiping away tears, to join a volunteer movement she will launch to provide aid to the poor.

Rep. Ferdinand Martin Romualdez, a cousin of Marcos Jr., has been endorsed as House speaker by his party. Another possible candidate is Romualdez’s ally and former President Gloria Macapagal Arroyo, who brokered the alliance of Marcos Jr. and Sara Duterte.

Only one opposition candidate, Sen. Risa Hontiveros, would likely make it to the new slate in the Senate.

Aside from deciding the fate of the president’s legislative agenda and budget proposal, Congress is a crucial oversight that investigates major government anomalies and decides on impeachment complaints. A new anti-terror bill opposed by human rights groups, for example, easily passed in both chambers that were dominated by allies of President Rodrigo Duterte.

Court cases and legal issues still hound the late dictator’s family, including payment of a huge estate tax, a 2018 corruption conviction of his widow, Imelda Marcos, which is on appeal, and full compensation of thousands of victims of torture, detentions, disappearances and other atrocities committed in the martial-law era when he was in power.

A brutal anti-drug crackdown launched by Duterte, which killed thousands of mostly petty drug suspects, has sparked an investigation by the International Criminal Court as potential crimes against humanity. The outgoing leader, who is known for his brash language, has said he would likely face more criminal complaints when he steps down on June 30.

Monday’s elections assured the political longevity of both the Marcoses and the Dutertes. A son of the presumptive president, Sandro Marcos, was elected to the House as a representative of their northern home province of Ilocos Norte and several relatives captured provincial posts.

Sara Duterte’s brother, Sebastian Duterte, would succeed her as mayor of southern Davao city. Another brother, Paulo Duterte, has been reelected to another congressional term.

Philippine elections have long been dominated by politicians belonging to the same bloodlines. At least 250 political families have monopolized power across the country, although such dynasties are prohibited under the constitution. Congress — long controlled by members of powerful clans targeted by the constitutional ban — has failed to pass the law needed to define and enforce the provision.

Duterte, the outgoing president, carved a political name starting in the 1980s as a longtime Davao mayor with his extra-tough campaign against criminality. It left hundreds of drug suspects dead and presaged similar killings on a wider scale that would follow him when he rose to the presidency in 2016 on an audacious but failed campaign promise to eradicate illegal drugs and corruption in three to six months.