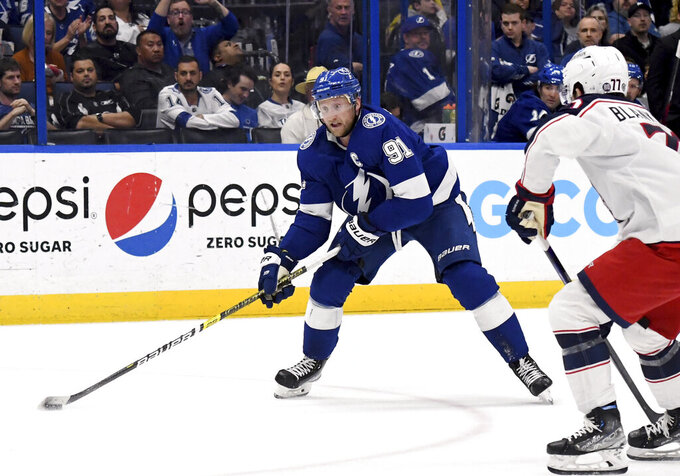 TAMPA, Fla. (AP) — Steven Stamkos reached the 100-point mark for the first time in his NHL career by scoring two goals and assisting on two more, and the Tampa Bay Lightning beat the Columbus Blue Jackets 4-1 on Tuesday night for their fourth consecutive victory.

Stamkos had an assist and a power-play goal in the first period, then got point No. 100 when he took a pass from Nikita Kucherov and beat Elvis Merzlikins from the right circle at 7:29 of the second to put Tampa Bay ahead 3-1.

Stamkos also assisted on Ondrej Palat’s third-period goal for his 101st point; his previous career high was 98 points in 2018-19. He has at least three points in each of his past five games and is the eighth NHL player to reach 100 points this season.

“It’s been a pretty good run here in the last couple of weeks,” Stamkos said. “If you would have asked me about this a couple of weeks ago, I would’ve settled for something less than 100.”

Kucherov had a goal and three assists, giving him nine points in his past two games, and Andrei Vasilevskiy made 20 saves for Tampa Bay, which will look to extend its Stanley Cup championship streak to three straight when the playoffs begin next week.

“Everything is coming together at the right time,” Stamkos said of the Lightning, who reached the 50-win mark for the fourth time since entering the NHL in 1992. “That’s more important. We want to be feeling good about ourselves going into the postseason and we’re certainly trending in that direction."

The Stamkos-Kucherov combination has fueled Tampa Bay, which has outscored its opponents 26-8 during the winning streak.

“That line has been extremely hot,” coach Jon Cooper said, “and it’s no surprise that we’re winning.”

Oliver Bjorkstrand scored a first-period power-play goal and Merzlikins finished with 28 saves for the Blue Jackets, who are 1-4-1 in their last six games.

But Columbus coach Brad Larsen wasn’t unhappy with his team’s effort, even with the loss.

“You make mistakes with a team like that, they’re lethal," he said. "One little mistake and it ends up in your net. They’ve won two Cups for a reason.”

Each team scored before the game was three minutes old.

Kucherov extended his goal streak to seven games when his wrist shot from the high slot sailed through traffic and past Merzlikins at 1:37. The Blue Jackets tied it at 2:59 when Bjorkstrand beat Vasilevskiy with a power-play one-timer from the top of the left circle for his 26th of the season.

Stamkos put the Lightning ahead 2-1 with about three minutes left in the first, beating Merzlikins with a power-play one-timer from the lower left circle and got his second in the second period.

Palat converted Kucherov’s passout with 5:07 remaining in the game for his 18th goal.

“This game is something for our group to learn from,” Bjorkstrand said after the Lightning allowed Columbus just 21 shots on goal while blocking 25 others.

The Lightning played the final 2 1/2 periods with five defensemen after Erik Cernak was hit in the face by a deflected shot during a first-period power play.

Victor Hedman’s assist on Stamkos’ first goal was the defenseman’s 600th NHL point. All 600 have come with the Lightning, who selected him No. 2 in the 2009 NHL Draft, one year after taking Stamkos with the No. 1 overall pick.

“It’s been an honor with him and call him my friend,” Stamkos said. “I see him game in and game out, all the minutes he plays, and he’s not even close to being done.”

Stamkos passed Martin St. Louis on Thursday to become the Lightning’s career scoring leader. He is one goal shy of his sixth season with at least 40 goals ... Kucherov has 13 goals in his past 13 games and 28 points in 14 games this month. … Tampa Bay was 1 for 2 on the power play and is 11 for 21 with the extra man in its past six games. … The Lightning have won five in a row against the Blue Jackets and have outscored Columbus 11-3 in two wins this season.

The Blue Jackets and Lightning head for Columbus, where they play the second of their home-and-home series on Thursday.