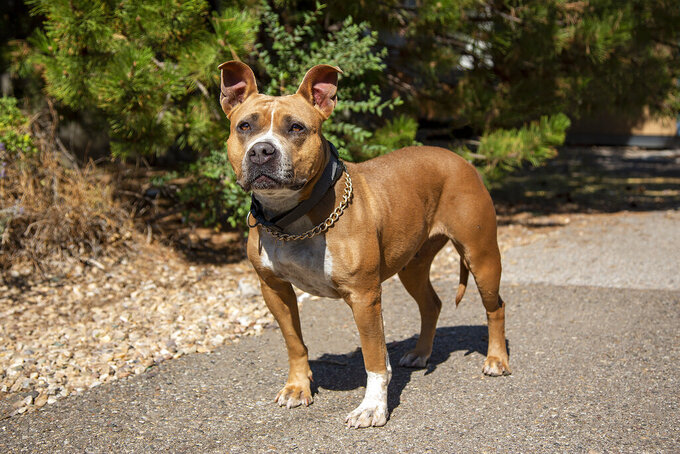 Desiree Cawley, ASSOCIATED PRESS
In this photo provided by Albuquerque Animal Control, a pit bull mix named Yessenia is seen at an animal shelter in Albuquerque, N.M. on Wednesday, Sept. 29, 2021 while recovering from a gunshot wound. Police issued a warrant for the arrest of 22-year-old Xavier Marquez on charges of murder and other crimes after he allegedly shot Yessenia's owner, 34-year-old Shawn Lynch. According to a criminal complaint, witnesses said the pair were walking down the street when they encountered Marquez as he sat in a truck. The complaint says Marquez shot the female pit bull once and then shot Lynch four times after he objected. Lynch died five days later. (Desiree Cawley/Albuquerque Animal Control via AP) 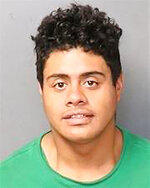 SANTA FE, N.M. (AP) — Authorities in New Mexico's largest city said they were looking for a shooter who killed a neighbor and wounded his dog while they were out for a walk.

Shawn Lynch, 34, was walking his pit bull, Yessenia, last week when a neighbor with a history of violence yelled at him from a parked SUV, accusing him of looking at him the wrong way, according to an arrest warrant that Albuquerque police issued for the suspect this week.

According to witness accounts documented by police, 22-year-old Xavier Marquez grabbed a 9 mm pistol, got out of the vehicle and shot the dog in the rear. When Lynch yelled back, Marquez fired around 10 shots, four of which hit Lynch.

One bullet went through a wall in the apartment complex where the men lived, landing in a mattress where a woman was lying in her bed. No one else was injured in the Sept. 22 shooting.

Marquez drove away on a moped, and Yessenia limped to her dog bed, leaving a trail of blood, according to the police warrant. The animal is getting care and recovering.

Lynch's death five days later added to the record number of homicides in Albuquerque this year, which reached 85 as of Monday.

Nationally, homicides were up nearly 30% last year, the largest one-year jump ever, according to FBI data released this week.

Police wrote that Marquez was an “involved party” in two Albuquerque homicides this summer, writing in a warrant that one police report listed him as wearing a ballistic vest.

Marquez wasn't charged in those cases but was arrested on Aug. 20 after punching two strangers, including an off-duty police officer, court records show. He was released on the condition that he wouldn't keep any guns and went to a court hearing scheduled this month.

Police spokesman Gilbert Gallegos declined to comment on the summer homicide cases involving Marquez and the department’s efforts to arrest him.

The pit bull that was shot survived after veterinarians removed a 9 mm bullet fragment from its leg, according to city animal control officials.

“She’s actually doing really well. It’s amazing how resilient animals are when something this traumatic happens,” said Albuquerque Animal Welfare spokeswoman Desiree Cawley, adding that Lynch’s family is still deciding who should take care of the dog when it recovers.