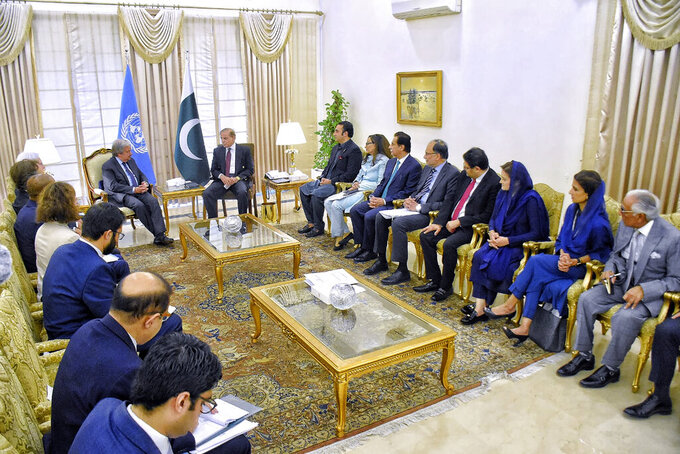 ISLAMABAD (AP) — U.N. Secretary-General Antonio Guterres said Friday that the world owes impoverished Pakistan “massive” help in recovering from the summer's devastating floods because the country bears less blame than many other nations for climate change, which experts say contributed to the deluge.

Months of heavy monsoon rains and flooding have killed 1,391 people and affected 3.3 million in this South Asian nation while half a million people have become homeless. Planeloads of aid from the United States, the United Arab Emirates and other countries have begun arriving, but Guterres said there's more to be done.

Nature, the U.N. chief said in Islamabad, has attacked Pakistan, which contributes less than 1% of global emissions, according to multiple experts.

Nations that “are more responsible for climate change ... should have faced this challenge,” said Guterres, sitting next to Pakistani Prime Minister Shehbaz Sharif.

“We are heading into a disaster," Guterres added. “We have waged war on nature and nature is tracking back and striking back in a devastating way. Today in Pakistan, tomorrow in any of your countries."

The U.N. chief's trip comes less than two weeks after Guterres appealed for $160 million in emergency funding to help those affected by the monsoon rains and floods that Pakistan says have caused at least $10 billion in damages.

“I appeal for massive support from the international community as Pakistan responds to this climate catastrophe,” Guterres tweeted after landing in Pakistan earlier Friday.

“Pakistan has not contributed in a meaningful way to climate change, the level of emissions in this country is relatively low," Guterres said. “But Pakistan is one of the most dramatically impacted countries by climate change."

On Friday, the first planeload arrived from the U.S. , which Washington says is part of an upcoming $30 million in assistance. More U.S. military planes are expected to arrive in the coming days as part of a humanitarian bridge set up by Washington to deliver much-need aid across the country.

Later, Guterres directed his words at the international community, saying that by some estimates, Pakistan needs about $30 billion to recover from the floods.

“Even today, emissions are rising as people die in floods and famines. This is insanity. This is collective suicide," he said. “From Pakistan, I am issuing a global appeal: Stop the madness; end the war with nature; invest in renewable energy now.”

So far, U.N. agencies and several countries have sent nearly 60 planeloads of aid, and authorities say the UAE has been one of the most generous contributors and sent so far 26 flights carrying aid for flood victims.

Also Friday, Samantha Power, the administrator of USAID, met with Pakistan’s Foreign Minister Bilawal Bhutto Zardari in Islamabad. She later told reporters she had visited flood-hit areas in Sindh province on Thursday, and she witnessed widespread destruction caused by floods.

The floods have touched all of Pakistan, including heritage sites such as Mohenjo Daro, a UNESCO World Heritage Site considered one of the best-preserved ancient urban settlements in South Asia. The civilization that dates back 4,500 years, coinciding with those of ancient Egypt and Mesopotamia.

“It is happening now all around us and I urge governments to address this issue,” he said and added that what he has done so far as the U.N. chief is “a drop in the ocean of the needs of the Pakistani people”.

He said a proposal for a donors conference for flood-hit Pakistan is under discussion.

Since June, heavy rains and floods have added new burdens to cash-strapped Pakistan and highlighted the disproportionate effect of climate change on impoverished populations. Experts say Pakistan is responsible for only 0.4% of the world’s historic emissions that are blamed for climate change. The U.S. is responsible for 21.5%, China for 16.5% and the European Union for 15%.

The floods in Pakistan have also injured 12,722 people, destroyed thousands of miles of roads, toppled bridges and damaged schools and hospitals, according to the National Disaster Management Agency.

Even as they contend with the unprecedented flooding, Pakistani authorities are also struggling with militant attacks. Late Friday, suspected militants opened fire on a mayor's convoy in Tank, a town in the Khyber Pakhtunkhwa province, the police said. Tank has also been affected by the flooding.