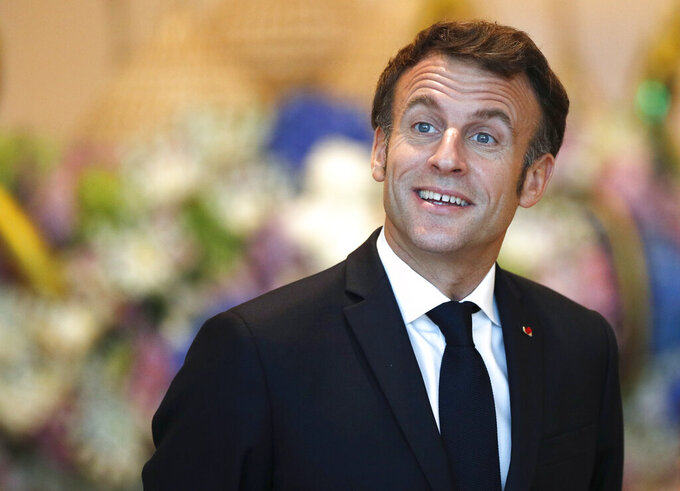 CANBERRA, Australia (AP) — Australia’s prime minister said Friday he remained committed to building a fleet of submarines powered by U.S. nuclear technology despite the French president describing the plan as a “confrontation with China.”

The previous Australian government infuriated President Emmanuel Macron last year by canceling a contract for a French-built fleet of conventionally-powered submarines worth 90 billion Australian dollars ($66 billion) and opting instead for nuclear-powered versions in a deal secretly brokered with the United States and Britain.

Prime Minister Anthony Albanese has stood by the so-called AUKUS agreement to embrace nuclear technology since he came to power at elections in May. Whether Australia opts for a version of the U.S. Virginia-class or British Astute-class submarine will be announced in March.

“We are proceeding with the AUKUS arrangements, there’s nothing ambiguous about it,” Albanese told reporters at a Bangkok summit that Macron is also attending.

Macron on Thursday criticized the AUKUS deal, telling reporters that France had offered Australia, which has no nuclear energy industry, diesel-electric subs that could be independently maintained.

“It was not in a confrontation with China because these were not nuclear-powered submarines,” Macron said through an interpreter.

But Albanese’s predecessor Prime Minister Scott Morrison chose the “exact opposite: To enter into a confrontation by going nuclear,” Macron added.

When the AUKUS deal was announced in September last year, China’s foreign ministry condemned the export of U.S. nuclear technology as “highly irresponsible.” Some of Australia’s neighbors fear it could lead to an arms race in the region.

Asked if Australia was creating a nuclear confrontation with China, Albanese replied: “President Macron is entitled to put forward his views, as he does in a very forthright way.”

“He’s entitled to make whatever comments he wants as the leader of France,” Albanese added.

Albanese suggested there was no ill-feeling between the leaders, saying, “We had a very friendly exchange, as we always do” when they met Thursday night in Bangkok.

Last year, Macron accused Morrison of lying to him over the deal and refused to take the Australian leader’s phone calls for weeks after the contract for a dozen submarines was scrapped.

Macron on Thursday said the prospect of France supplying Australia with submarines remained “on the table.”

Albanese said Australia was continuing to discuss with France “how we can cooperate in defense.”

With the first of eight nuclear submarines not due to be delivered until 2040, Australia could face a capability gap as its Collins-class conventional submarines approach the end of their lives.

There has been speculation that France could provide Australia with a small interim fleet of diesel-electric subs.

Australian Defense Department officials said at the time the compensation was generous in the hope of cooling French anger while enhancing security links between the two South Pacific powers.

Albanese said AUKUS was not brought up on Tuesday when he had his first bilateral meeting with Chinese President Xi Jinping.