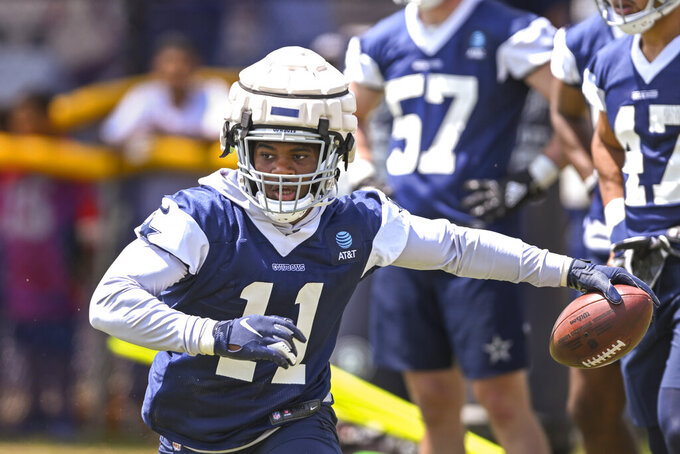 The club also had depth in mind with the addition of Barr, a four-time Pro Bowler who spent his first eight seasons in Minnesota. Dallas had shown interest in him long before training camp in California.

Barr is starting his stint with the Cowboys on the physically unable to perform list, not for an injury but because the club is taking a conservative approach getting the 30-year-old ready for camp practices.

Parsons had 13 sacks on his way to winning NFL Defensive Rookie of the Year, tied for the third-most for a first-year player since sacks became an official statistic in 1982.

Because of injuries early last season, there were times Parsons played the majority of his snaps at defensive end, and the Cowboys usually had two other linebackers on the field.

The addition of Barr means the top three choices in the new mix, which includes Leighton Vander Esch, are former first-round picks.

“I think when you look at packages and how we feature Micah, I think it gives you another weapon, another excellent player on and off the ball,” coach Mike McCarthy said. “I think when you get in and out of packages as you build your system for a 17-game season, I know the defensive staff is real excited to have another piece.”

Barr's career high for sacks is four from his rookie year with the Vikings in 2014, when he was the ninth overall pick. The 6-foot-5 Barr is more in the mold of Vander Esch (6-4) as a traditional linebacker.

When Parsons lines up at defensive end, including in the three-point stance the Cowboys envision on occasion, Barr and Vander Esch could be paired on the second level behind him.

“I’m just trying to continue to help unlock his game and allow him to be the best player he can be,” Barr said of Parsons. “Pretty amazing what he was able to accomplish. I think he can just continue to elevate and take it to the next level. I’m hoping to be a tool and resource to him and also to learn from him and learn from all the guys.”

Barr was a steady presence during his first six seasons in Minnesota, including four straight trips to the Pro Bowl from 2015-18. A torn pectoral muscle sidelined him for the season in Week 2 in 2020. He then missed the first four games last year with a knee injury.

Because he went unsigned through the offseason, Barr's first practice at camp will be his first since the end of last season. He said there was never a specific timeline for finding a new team.

“Timing is everything,” Barr said. “No rhyme or reason to it. It was just the right time for both parties. Hopefully, it’s a good marriage.”

Second-year player Jabril Cox was cleared for camp after tearing an anterior cruciate ligament in Week 8 against Minnesota last season, although he recently was given a couple of days off.

The Cowboys are high on rookie fifth-round pick Damone Clark, who fell in the draft because of spinal fusion surgery that could sideline him all of this season. The injuries to Cox and Clark are two more reasons the Cowboys had interest in Barr.

McCarthy remembers Barr from facing the Vikings as coach in Green Bay. And part of Barr's interest in Dallas came from senior defensive assistant George Edwards, who was Minnesota's defensive coordinator for Barr's first six seasons.

“We always had to be very, very conscious of the matchup that you had with him,” McCarthy said. “We want to be multiple in our defensive packages and we want to continue to develop different rush plans. He's a great fit for us.”

NOTES: The Cowboys are thin at RB in camp with Rico Dowdle and rookie Aaron Shampklin in COVID-19 protocols. They also lost their only fullback for at least a couple of weeks as Ryan Nall battles a shoulder injury.