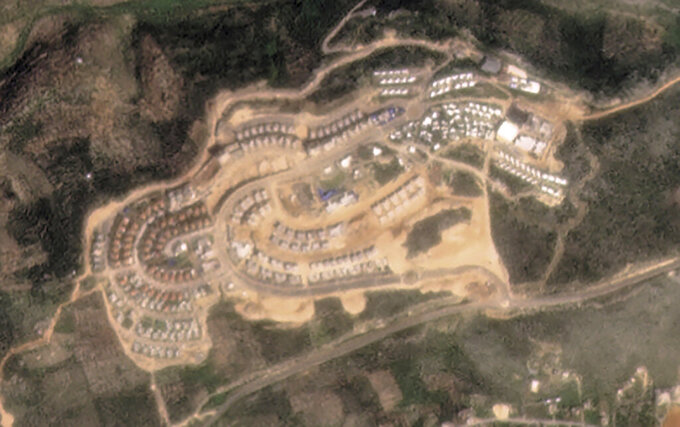 Uncredited, ASSOCIATED PRESS
This satellite image provided by Planet Labs Inc. shows the West Bank Jewish settlement of Bruchin on March 6, 2021. Satellite photos and data obtained by the AP document for the first time the full impact of the policies of then-President Donald Trump. (Planet Labs Inc. via AP)

EFRAT, West Bank (AP) — An aggressive Israeli settlement spree during the Trump era pushed deeper than ever into the occupied West Bank — territory the Palestinians seek for a state — with over 9,000 homes built and thousands more in the pipeline, an AP investigation showed.

If left unchallenged by the Biden administration, the construction boom could make fading hopes for an internationally backed two-state solution — Palestine alongside Israel — even more elusive.

Satellite images and data obtained by The Associated Press document for the first time the full impact of the policies of then-President Donald Trump, who abandoned decades-long U.S. opposition to the settlements and proposed a Mideast plan that would have allowed Israel to keep them all — even those deep inside the West Bank.

Although the Trump plan has been scrapped, the lasting legacy of construction will make it even harder to create a viable Palestinian state. President Joe Biden’s administration supports the two-state solution but has given no indication on how it plans to promote it.

The huge number of projects in the pipeline, along with massive development of settlement infrastructure, means Biden would likely need to rein in Israel to keep the two-state option alive. While Biden has condemned settlement activity, U.S. officials have shown no appetite for such a clash as they confront more urgent issues.

At the same time, Israel will likely continue to be led by a settlement hawk. In the wake of yet another inconclusive Israeli election, either Prime Minister Benjamin Netanyahu or one of his right-wing challengers is poised to head the government, making a construction slowdown improbable.

Hanan Ashrawi, a veteran Palestinian spokeswoman, called the Trump administration a “partner in crime” with Netanyahu. She said Biden would have to go beyond traditional condemnations and take “very serious steps of accountability” to make a difference.

“It needs a bit of courage and backbone and willingness to invest,” she said.

According to Peace Now, an anti-settlement watchdog group, Israel built over 9,200 new homes in the West Bank during the Trump presidency. On an annual average, that was roughly a 28% increase over the level of construction during the Obama administration, which opposed the settlements.

Perhaps even more significant was the location of the construction. According to Peace Now, 63% of the homes built last year were in outlying settlements that would likely be evacuated in any peace agreement. Over 10% of the construction in recent years took place in isolated outposts.

Hagit Ofran, a Peace Now researcher who compiled the data, said Israel is doing its utmost to treat the West Bank "as if it’s part of Israel without leaving a scope for a Palestinian state.”

Israel has also laid the groundwork for a massive construction boom in the years to come, advancing plans for 12,159 settler homes in 2020. That was the highest number since Peace Now started collecting data in 2012.

Unlike his immediate predecessors, Netanyahu has encouraged construction in remote areas deep inside the West Bank, further scrambling any potential blueprint for resolving the conflict.

Settler advocates have repeatedly said that it would take several years for Trump’s support to manifest in actual construction. Peace Now said that trend is now in its early stages and expected to gain steam.

Israel captured the West Bank, east Jerusalem and the Gaza Strip — territories the Palestinians want for their future state — in the 1967 Mideast war. It withdrew from Gaza in 2005 but has cemented its control over east Jerusalem — which it unilaterally annexed — and the West Bank.

Nearly 500,000 Israeli settlers live in the West Bank, roughly 15% of the total population. In addition, over 200,000 Jewish Israelis live in east Jerusalem, which is also home to over 300,000 Palestinians.

The Biden administration says it is opposed to any actions by Israel or the Palestinians that harm peace efforts. “We believe, when it comes to settlement activity, that Israel should refrain from unilateral steps that exacerbate tensions and that undercut efforts to advance a negotiated two-state solution,” State Department spokesman Ned Price said this month.

Continued settlement growth could meanwhile bolster the case against Israel at the International Criminal Court, which launched an investigation into possible war crimes in the Palestinian territories last month. Israel appears to be vulnerable on the settlement issue because international law forbids the transfer of civilians into lands seized by force.

Israel and its Western allies have rejected it as baseless and biased. Israel is not a member of the court, but any potential ICC warrants could put Israeli officials at risk of arrest abroad.

The settlements are scattered across the West Bank, running the gamut from small hilltop clusters of tents and mobile homes to full-fledged towns with residential neighborhoods, shopping malls and in one case, a university. Every Israeli government has presided over the expansion of settlements, even at the height of the peace process in the 1990s.

The Palestinians view the settlements as a violation of international law and an obstacle to peace, a position with wide international support. Israel considers the West Bank to be the historical and biblical heartland of the Jewish people and says any partition should be agreed on in negotiations.

The two sides have not held serious talks in more than a decade.

Trump, who took unprecedented steps to support Israel’s territorial claims, remains popular in Efrat. The settlement is located in the rolling hills south of Jerusalem and is expanding toward the north into the outskirts of the Palestinian city of Bethlehem.

“You keep using the term settlement,” said Moti Kellner, a retiree who has lived in the area since 1986. “Walk around, does this look like something that’s a camp, with tents and settling? It’s a city!” He described Trump’s policies as “very good, if they’re not overturned.”