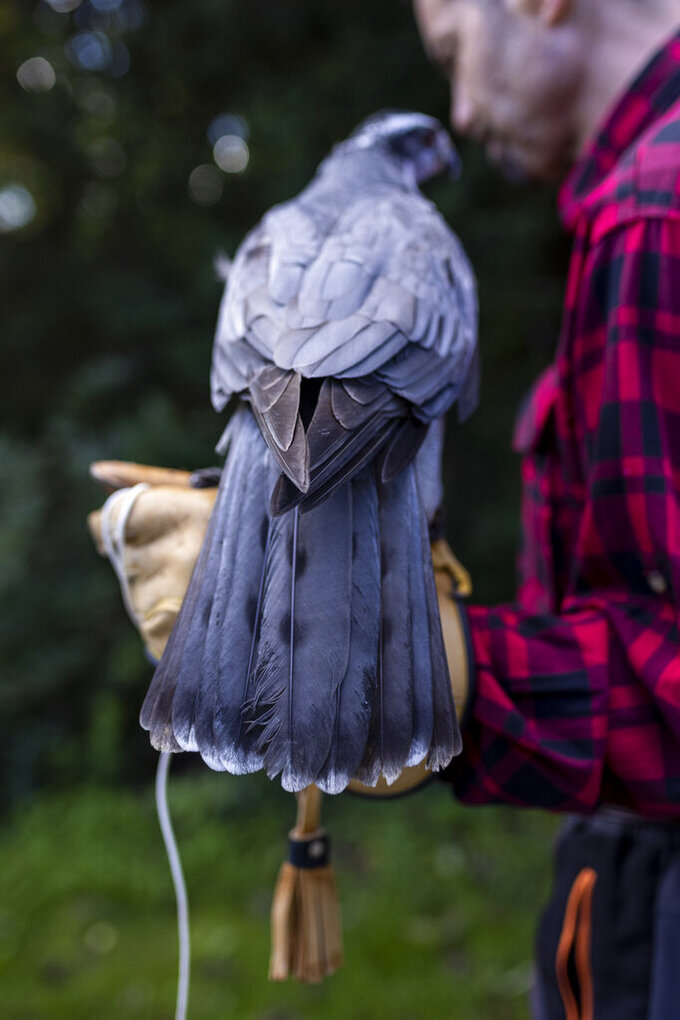 TYGER WILLIAMS, ASSOCIATED PRESS
A northern goshawk rests on the hands of Mike Dupuy, a falconer, while walking around his home in Middleburg, Pa., Friday, Oct. 1, 2021. (Tyger Williams/The Philadelphia Inquirer via AP)

PHILADELPHIA (AP) — On Jacks Mountain, where the trees showed hints of gold and orange, raptors took flight on an autumn afternoon, hitching a free ride on warm updrafts all along the ridge.

Mike Dupuy, a master in the sport of falconry, can see them, even miles away, from his front lawn. He knows them by their calls, their color, even the shape of their tail. Often it’s a fierce Cooper’s hawk on the prowl or the ubiquitous red-tailed hawk, a sturdy SUV-like member of the raptor family. But the rare, gunmetal gray hawk with the reddish eyes perched on Dupuy’s arm — a northern goshawk — is his favorite, a fighter-jet of a bird capable of launching from his hand and turning a pigeon or chipmunk into a blur of feathers or fur in a second or two.

Few people ever see one.

“This is a wild bird,” he said. “This came from a nest in Pennsylvania.”

A reclusive forest dweller, the northern goshawk was moved from a threatened species list to endangered by the Pennsylvania Game Commission last month. That step will protect the species from human activity, such as logging, and enable researchers to study potential threats, including West Nile virus, logging, natural gas extraction, and predation from carnivores. The listing also will likely affect falconry, the ancient art of hunting with captive raptors.

Dupuy, who was born in Port-au-Prince, Haiti, took the male northern goshawk when it was a chick in 2013 and he’s raised it ever since. It’s one of many hawks, falcons, and owls that he keeps at home. Now that the species is officially endangered in Pennsylvania, it’s unclear whether any of the state’s 200-plus licensed falconers like Dupuy would be allowed to take one to raise and fly. Dupuy, a self-professed rebel of the falconry world, was a dissenting voice on the Pennsylvania Goshawk Project’s subcommittee that’s studied goshawk numbers and nesting sites in the state for several years prior to the listing.

“I come from a long line of troublemakers,” he said at his home last month.

While the state and many researchers on the subcommittee believe goshawk numbers have been steadily decreasing for two decades, Dupuy believes the study was insufficient, too small for such a secretive bird. He believes the endangered listing was a foregone conclusion before any studies were even done. Dupuy said the subcommittee only researched a small fraction of Pennsylvania’s vast forests and didn’t use techniques that have been successful at gauging numbers in the past, such as polling turkey hunters who often come across nests.

“All of these people have vested interests in making a goshawk endangered,” he said. “They have a bias against falconers, but there’s no softer, more zen-like form of hunting.”

Dupuy’s income is centered on birds and falconry and he believes that irks birders, conservationists, and wildlife officials. He owns Mike Dupuy Hawk Food, which sells prepared foods, enclosures, perches, and other falconry equipment. In 2015, the U.S. Fish and Wildlife Service charged Dupuy with violating the Migratory Bird Treaty Act after he requested identification bands from the Pennsylvania Game Commission for three goshawks he captured. Authorities believed Dupuy had captured the birds for breeding purposes, which he said he was legally permitted to do. Dupuy fought the charges and a federal judge found him not guilty after a one-day trial.

“They didn’t have to investigate me, I self-reported these birds,” he said. “I paid money to obtain a permit to do this.”

Margaret Brittingham, a professor of wildlife resources at Penn State who’s been collecting data on goshawks, said the endangered listing is not an attack on falconers. She noted that the goshawk is also on endangered lists in New Jersey, Maryland, and Virginia and that listings, ideally, are not meant to be permanent.

“It’s not a forever list,” she said. “We can make progress. The peregrine falcon, the bald eagle, and the osprey have been delisted.”

Brittingham said there’s always been a consensus on the northern goshawk’s secretive nature, but she also believes the decline in nesting pairs is real.

“If it is a mistake, it will correct itself,” she said.

Sean Murphy, an ornithologist with the Pennsylvania Game Commission, said the listing will enable the state to put resources and protections toward the goshawk. For example, if a nest with active breeding is discovered, buffers can be put in place against logging or fracking activities.

“Now we focus on the bird’s recovery,” he said.

In Maryland, to the south, there are so few northern goshawks that Dave Brinker, an ecologist with the state’s Department of Natural Resources, often spends time researching the bird in Pennsylvania’s Allegheny National Forest.

The last population estimate, taken in the 1990s, put Pennsylvania goshawk numbers at about 200 breeding pairs, Brinker said. But the population has been dropping steadily in the state since about 2000, and Murphy, with the Game Commission, said there is no population estimate today.

Brinker lays most of the blame on West Nile virus, which is transmitted to goshawks by infected mosquitoes and other birds they eat, such as crows and ruffed grouse. Other factors are at play, too, Brinker said, that highlight the tricky balance of wildlife management. The fisher, a large, carnivorous member of the weasel family, was once close to extinction in Pennsylvania, but conservation efforts have brought their numbers back. Adept climbers, fishers often prey on goshawk nests, Brinker said.

“I’m a predator biologist, I like fishers. They are cool and I’m glad they’ve been restored,” Brinker said. “That being said, as professional biologists, we have to make sure that managing one species doesn’t put another in danger.”

Brinker considers Dupuy a friend and said they simply disagree about the bird’s abundance in Pennsylvania.

“He’s got a lot of good ideas because he’s a small businessman and he doesn’t work in government, and it’s a different environment,” Brinker said. “When you’re dealing with conservation issues, though, you do the best you can with what you have.”

Dupuy started his own nonprofit, the Goshawk Society, out of concern that “government institutions and academic institutions” were the sole arbiters of raptor research, giving little credence to falconers and hunters who spend thousands of hours in the woods. On his website, Dupuy seeks sightings from the public and offers potential rewards to spring turkey hunters who may have seen or been “attacked” by a northern goshawk in the woods. The birds will often strafe intruders who get too close to their nests.

The Pennsylvania Falconry and Hawk Trust, a statewide group that runs annual meets and advocates for hunting with the birds, also feared that the goshawk’s secretive nature, coupled with the deep forests they call home, would make research difficult and paint an incomplete picture.

“The PFHT had been involved with the research project since the beginning and in our opinion, the overall results of the research done did not fully encompass the species population as a whole,” said Patrick Miller, the trust’s eastern director.

Miller also believes the subcommittee did the best research it could, given its resources, but a complete survey of goshawks requires more staffing and more time. While not many of the state’s 200 falconers fly goshawks, Miller said they are the preeminent bird in the sport, the ultimate athlete. He said it’s still unclear whether the state will permit falconers to fly goshawks they’ve already captured given their new endangered status.

The Game Commission and conservation groups such as Hawk Mountain, Miller noted, are seeking sightings and nesting locations from the public and he recommends all reports go to them.

Dupuy said many falconers would simply buy northern goshawks from breeders if they’re no longer allowed to take them from nests. They can cost up to $2,000, he said.

Locally, he’s searched for them on Jacks Mountain with little luck, chartering an airplane to scan for nests and avoiding poisonous snakes on the ground. He’s seen a few juveniles and at least one adult there over the years.

On this day, the only goshawk around was the one Dupuy owned.