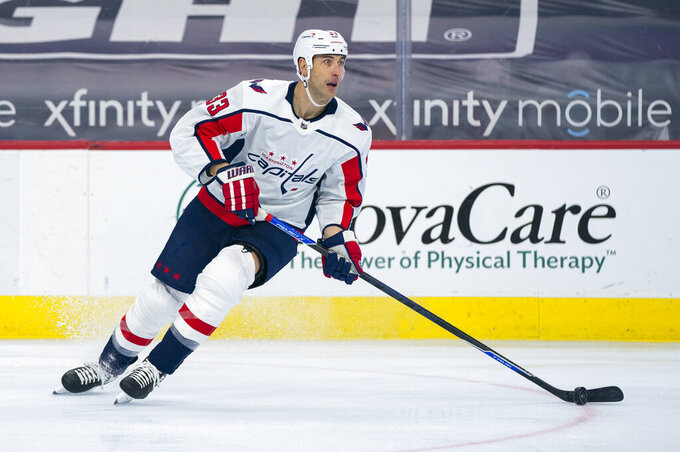 Chris Szagola, ASSOCIATED PRESS
FILE- In this April 17, 2021, file photo, Washington Capitals' Zdeno Chara controls the puck during the first period of an NHL hockey game against the Philadelphia Flyers, Saturday, in Philadelphia. Chara is returning to the team he started his career with after agreeing to terms on a one-year deal with the New York Islanders. It will be the 44-year-old 24th NHL season. (AP Photo/Chris Szagola, File)

One call from Connor McDavid was all Zach Hyman needed to put unfinished business with the Toronto Maple Leafs behind him upon joining the Edmonton Oilers.

Hyman left his hometown team to sign a $38.5 million, seven-year contract with McDavid and the Oilers, who are similarly trying to get over the hump in the playoffs. McDavid immediately invited him to work out with him and some other teammates, so it did not take long for Hyman to feel welcome and appreciate the reigning NHL MVP's game.

“It was awesome,” Hyman said. “It’s not just natural ability. It’s his drive and determination to continue to push and get better, which was really awesome to see.”

Hyman became a salary-cap casualty in Toronto, where he spent his first six NHL seasons playing a jack-of-all trades role, which included playing time on the top line. A two-time 20-goal-scorer, he’s expected to add much-needed offensive depth to Edmonton, which lacked secondary scoring in being swept by Winnipeg in the first round of the playoffs.

Hyman chose Edmonton after having a chance to tour the city with his wife once the Maple Leafs made it clear they wouldn’t be re-signing him.

“I said to my wife, `It looks like this is where I want to play from a hockey standpoint, like is where I think I have the best chance,‘” he recalled. “And my wife’s all in on winning. She’s like, 'Go and win.‘"

Another factor behind electing to stay in Canada was knowing his family and friends would be able to travel to see him play, given the uncertainty of cross-border travel restrictions during the pandemic.

Among the Maple Leafs’ most notable offseason moves was signing forward Nick Ritchie.

“He’s a big man that moves well up and down the ice,” said Maple Leafs forward Mitch Marner, who attended high school with Ritchie. “He’s a guy that brings some intimidation as well. He’s not afraid to throw his body around.”

When Zdeno Chara considered whether to play another NHL season at age 44, it came down to one thing.

“I love the game,” the big defenseman said after signing with the New York Islanders. “I have passion for the game and believe that I can still play.”

He isn't the only graybeard playing at least one more season. Still chasing it at 42, Joe Thornton signed with the Florida Panthers.

“It’s not like he’s going just to Florida to get a nice tan or something,” said San Jose's Tomas Hertl, who played with Thornton for several seasons. “I think Florida have a really good team, and they proved it, I think, over last two years. ... He wants the Cup."

The Panthers also traded for Sam Reinhart from Buffalo, loading up after losing to the eventual champion Tampa Bay Lightning in the first round.

It just so happens, Kotkaniemi’s offer sheet included a $20 bonus, which is Aho’s number.

Chicago: The Blackhawks, who welcome back captain Jonathan Toews after missing all last season, acquired defenseman Seth Jones and signed him to a long-term extension; got reigning Vezina Trophy-winning goalie Marc-Andre Fleury; and boosted their depth to the point that they might now be playoff contenders.

“It just makes the team with those few acquisitions just like that much more relevant,” star winger Patrick Kane said. “Obviously the goal is to get to the playoffs and hopefully make some damage.”

“I think it’s good,” Wilson said. “They obviously wanted to play tougher. They wanted to bring in some grit.”

“At the end of the last season, I vowed that we would make changes and that it was unacceptable and I think I was true to my word,” GM Chuck Fletcher said. “We were aggressively looking to change our team. We’ve made a lot of changes. We like to think we’ve upgraded our club, and time will tell.”