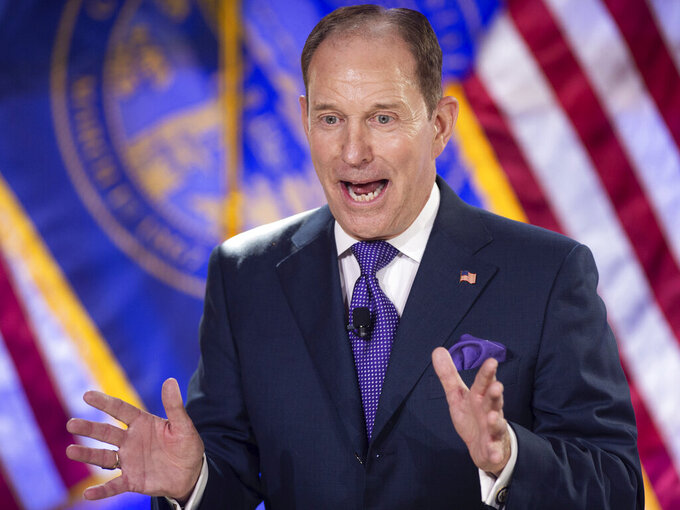 “While I agree with President Trump on many things, I strongly disagree that Charles Herbster is qualified to be our next governor,” said Ricketts, who can't seek reelection in 2022 due to term limits.

Trump praised Herbster as “an extraordinarily successful businessman who will fight for our farmers and ranchers, support our military and vets, and protect and defend your under siege Second Amendment rights.”

Ricketts hasn't formally endorsed a candidate in the GOP governor's primary race, but he has made several public appearances with University of Nebraska Regent Jim Pillen, and several of his close political allies work on Pillen's campaign.

Several other other Republicans have launched campaigns, including state Sen. Brett Lindstrom, of Omaha, and Breland Ridenour, an information technology manager. Former Gov. Dave Heineman has said he may run as well, and so has Herbster's former running mate, former state Sen. Theresa Thibodeau.

On the Democratic side, state Sen. Carol Blood, of Omaha, is currently running unopposed for her party's gubernatorial nomination.

Ricketts now finds himself in a similar position to his predecessor. Heineman endorsed a different Republican gubernatorial candidate, then-Attorney General Jon Bruning, in the 2014 primary, and strongly hinted that he didn't want the nomination to go to Ricketts. Ricketts, like Herbster, was a business executive at the time with no previous experience in public office.

Trump is enormously popular in western Nebraska, having won the vast and overwhelmingly rural 3rd Congressional District with nearly 76% of the vote in 2020. He won nearly 59% of Nebraska's statewide vote, but didn't fare as well in the more moderate, Omaha-centered 2nd District, which went to President Joe Biden.

Ricketts won by a similar margin statewide in his 2018 reelection and easily carried western Nebraska.