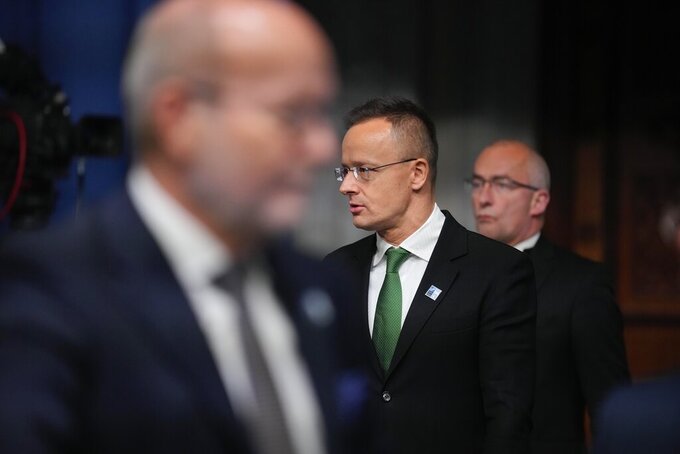 The EU's 27 nations have until Dec. 19 to take a decision based on the Commission’s proposal, which came as Hungary continues to block crucial EU decisions such as the disbursement of 18 billion euros of financial aid to Ukraine and a global tax deal.

Hungarian Prime Minister Viktor Orban has also angered the bloc’s officials with his repeated criticism of the EU sanctions targeting Russia for its war in Ukraine.

“This is an historic moment for the protection of the rule of law in Europe," said Petri Sarvamaa, a member of the European Parliament's committee on budgetary control. “If EU citizens’ money cannot be protected against irregularities, then it cannot be disbursed.”

European lawmakers last week put pressure on the Commission and Council, which represents the bloc’s 27 countries, with a resolution asking them to freeze the funds.

Although Hungary insists it does not link the issue of EU funds to other topics, many in Brussels see its vetoes as a sign that Orban is trying to blackmail the rest of the bloc into releasing the billions in regular EU funds and pandemic recovery cash that has been held up.

The EU’s executive branch proposed in September that the bloc suspend around 7.5 billion euros ($7.5 billion) in regular funding to Hungary over concerns about democratic backsliding and the possible mismanagement of EU money.

Hungary agreed on 17 anti-corruption measures, including the creation of an anti-corruption task force and changes to its public procurement rules, but the Commission believes that “notwithstanding steps taken, there is still a continued risk to the EU budget/”

The money can be frozen under a recently introduced conditionality mechanism that allows the EU to take measures to protect its budget.

Any action to suspend the funds must be approved by the EU member countries, and this requires a “qualified majority,” which amounts to 55% of the 27 members representing at least 65% of the total EU population.

The Commission simultaneously approved Hungary’s pandemic recovery plan worth 5.8 billion euros, but only on the condition that the country implement 27 “super milestones” — including the previous 17 measures.

“This means that no payment under the (recovery plan) is possible until Hungary has fully and correctly implemented these 27 super milestones,” the commission said.

Didier Reynders, the European Commissioner for Justice, said the EU will be “very vigilant" in its scrutiny of the progress made by Hungary in putting in place the binding reforms, adding that a backpedaling on their acceptance would block any subsequent payments. At the current speed of talks, Hungary is unlikely to receive any money before spring.

The head Hungarian official negotiating with the Commission said the Hungarian government sees the decision as a “significant step forward” toward Budapest gaining access to the suspended funds.

“We are delighted to see this, and we are pleased that the opportunity to sign the agreement on the recovery fund is finally open,” said Tibor Navracsics, Hungary’s minister for the use of EU funds. “We are confident that this decision and this proposal by the European Commission will open the way for us to conclude the last round of negotiations on the cohesion funds as well.”

Navracsics said Hungary’s government is “open for compromise,” and that he believes an agreement with the Commission can be reached by the end of the year.

“The consultations have been ongoing and have been fruitful, and the European Commission recognizes this,” he said.

Hungary, a large recipient of EU funds, has come under increasing criticism for veering away from democratic norms. The commission has for nearly a decade accused Orban of dismantling democratic institutions, taking control of the media and infringing on minority rights. Orban, who has been in office since 2010, denies the accusations.

If EU members decide to bloc access to the cohesion funds until Hungary meets the conditions required, Budapest will not lose cash immediately. Hungary would no longer be allowed to apply for the subsidies designed for EU programs and infrastructure projects, but the decision would not stop it from getting money which is still flowing through from the previous long-term budget, for the 2014-2020 period.

Justin Spike in Budapest contributed to this story.