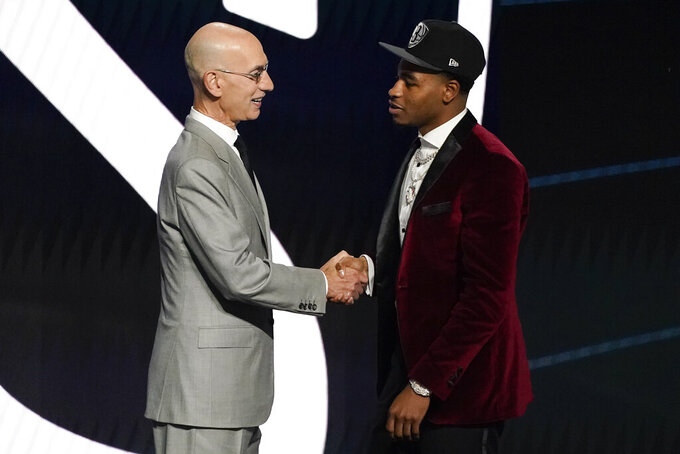 NEW YORK (AP) — The Brooklyn Nets took LSU's Cameron Thomas on Thursday night with the No. 27 pick in the NBA draft, adding the SEC's leading scorer to their high-powered roster.

“You can never have too much scoring,” Thomas said.

The Nets then added North Carolina center Day'Ron Sharpe after agreeing to acquire the rights to the No. 29 pick from Phoenix in a pending trade.

Thomas averaged 23 points last season as a freshman. Only Pete Maravich, Mahmoud Abdul-Rauf (then still known as Chris Jackson) and Bob Pettit ever averaged more in their first seasons at LSU.

Thomas, who led the nation with 194 free throws made last season, would join a roster featuring Kevin Durant, Kyrie Irving and James Harden that was second in the NBA with more than 118 points per game last season.

“The other part of it is, he is fearless and he is not afraid, and I think that is what we’re looking for,” Marks said. “We’re looking for guys that are competitive and have that edge to them and that chip on their shoulder.”

Thomas said Harden is his favorite player and he watched plenty of Nets games this season. Brooklyn rarely got its three superstars on the floor together because of injuries, but now has another player who can provide points when one or more of the Big Three is out.

“I feel like with me coming in and learning from those guys, scoring the ball-wise, it’s a match made in heaven,” Thomas said. “I can’t wait to play with some of my favorite players. It’s crazy.”

Thomas was the last player remaining in the green room at Barclays Center. Now he'll be back in Brooklyn in the fall to play on the Nets' home floor.

The Nets took Pepperdine's Kessler Edwards with the No. 44 pick, adding a 6-8 forward who can both block shots and shoot 3-pointers. Then at No. 49 Brooklyn went with Marcus Zegarowski of Creighton. His older brother, Michael Carter-Williams, was the NBA Rookie of the Year in 2014.

Brooklyn finished the night by taking Raiquan Gray of Florida State with the No. 59 pick.