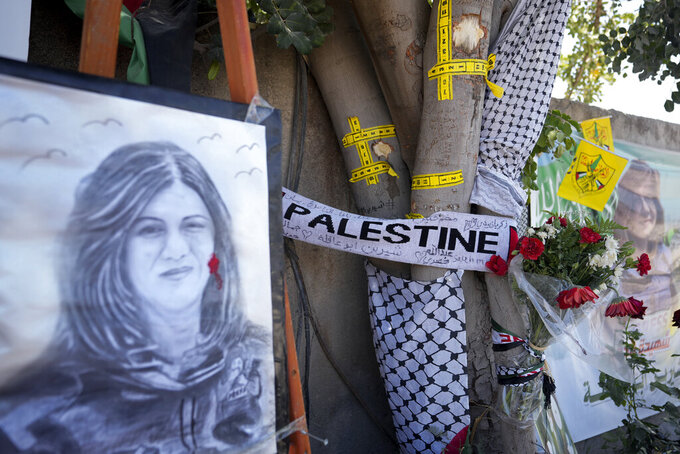 A Justice Department spokesman had no comment and there were no details about when an investigation might begin and what it would entail, nor what the ramifications of it might be. But an FBI probe into Israeli actions would be a rare, if not unprecedented, step.

An American investigation would follow months of pressure from Abu Akleh’s family and U.S. lawmakers disappointed with the inconclusive findings of a previous State Department assessment and Israeli military investigation into the death of the prominent correspondent last May. Abu Akleh’s supporters accuse Israel of intentionally killing the 51-year-old, and have urged Washington to open a full investigation.

But a probe risks straining the strong partnership between the U.S. and Israel at a time when Israel is bracing for the formation of its most right-wing government in history and as progressive Democrats in the U.S. have called for a more skeptical stance toward one of Washington's closest allies. It would directly challenge Israel’s claims that it properly holds its soldiers to account for their actions in the Palestinian territories.

Gantz lambasted what he described as a decision to open a U.S. Justice Department probe into Abu Akleh's killing, saying on Twitter that Israel has made it clear to the U.S. that it “won't cooperate with any external investigation."

“We will not allow interference in Israel’s internal affairs,” he added. Gantz, who is set to leave his post following elections earlier this month that vaulted Israel's former Prime Minister Benjamin Netanyahu back to power, served as defense minister when Abu Akleh was killed.

A Palestinian from Jerusalem who covered Israeli operations in the occupied West Bank for a quarter century, Abu Akleh was a household name among many Arabs in the Middle East. Her death sparked outrage across the world, throwing a spotlight on Israeli treatment of the Palestinians.

Palestinian officials, Abu Akleh’s family and Al Jazeera accuse Israel of intentionally targeting the veteran reporter. She was wearing a helmet and a protective vest marked with the word “press” when she was shot while covering an Israeli military raid in the Jenin refugee camp.

In September, Israel acknowledged for the first time that Israeli fire probably killed Abu Akleh. But the military stopped short of accepting responsibility for her death, vigorously denying allegations that a soldier targeted her and refusing to criminally investigate those involved.

An earlier assessment from the State Department also determined that the bullet that killed Abu Akleh was likely fired from an Israeli military position but was too damaged to say with certainty.

A series of independent investigations by the United Nations and international media outlets, including by The Associated Press, found that Israeli troops most likely fired the fatal bullet.

Palestinian Foreign Ministry officials did not immediately respond to requests for comment late Monday about the U.S probe. A spokeswoman for outgoing Israeli Prime Minister Yair Lapid declined to comment, and former Prime Minister Netanyahu, who is expected to return to lead the country in the coming weeks, also had no immediate comment.

“We hope this will be a turning point in the investigation into Shireen’s death,” he said.

The Council on American-Islamic Relations welcomed the reported probe, expressing hope “our nation will finally hold Israel accountable for its violence targeting American citizens, journalists and other civilians.”

It is not unusual for the FBI or other U.S. investigators to mount probes into non-natural deaths or injuries of American citizens abroad, particularly if they are government employees. However, such separate investigations are not the rule and it is exceedingly rare for them to occur in a U.S.-allied country like Israel that is recognized in Washington as having a credible and independent judicial system.

Human rights groups have long accused the Israeli military of failing to properly investigate wrongdoing by its own troops and seldom holding forces accountable. Israel contends its investigations are independent and professional.

Abu Akleh was shot while reporting on an Israeli military raid in the Jenin refugee camp in the northern West Bank, long a flashpoint in the Israeli-Palestinian conflict. Israel's escalating nightly arrest operations, launched following a spate of Palestinian attacks against Israelis in the spring that killed 19 people, have been concentrated in Jenin and nearby areas.

More than 130 Palestinians in east Jerusalem and the West Bank have been killed this year, making 2022 the deadliest year since 2006. Israel says most of those killed have been militants, but local youth protesting the raids as well as people not involved in the fighting have also been killed. Increasing Israeli incursions have prompted a series of Palestinian shooting attacks that have killed at least four Israelis in recent weeks.

Reports of a U.S. probe come after long-serving Netanyahu secured a return to power in Israel's national elections. He is in the midst of talks with his ultra-Orthodox and ultranationalist allies to form a coalition and is expected to cobble together Israel's most right-wing government in history.

The government, which is expected to see extremist lawmakers appointed to key ministries, has prompted concern among Israel's allies, including the U.S.