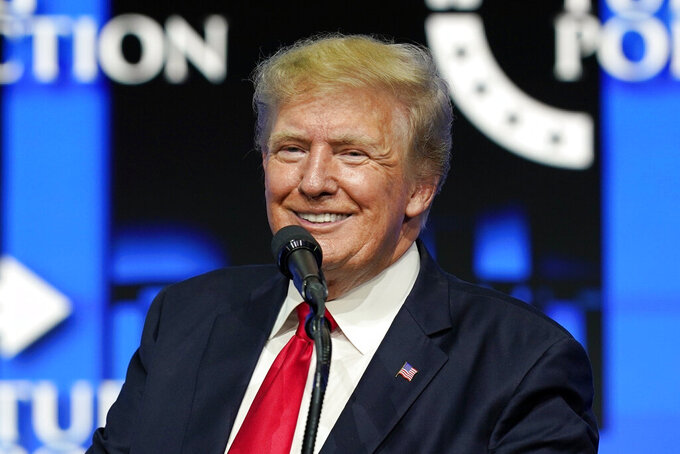 Ross D. Franklin, ASSOCIATED PRESS
FILE - In this July 24, 2021, file photo former President Donald Trump speaks to supporters at a gathering in Phoenix. The company planning to buy Donald Trump’s new social media business disclosed Monday, June 27, 2022 that it has received subpoenas from a grand jury in New York. Shares of Digital World Acquisition Corp. dropped 7% in morning trading Monday as the company reported that the subpoenas and related investigations by the Department of Justice and the Securities and Exchange Commission could delay its acquisition of the maker of Trump’s Truth Social app. (AP Photo/Ross D. Franklin, File)

NEW YORK (AP) — The company planning to buy Donald Trump’s new social media business has disclosed a federal grand jury investigation that it says could impede or even prevent its acquisition of the Truth Social app.

Shares of Digital World Acquisition Corp. dropped almost 10% Monday as the company revealed that it has received subpoenas from a grand jury in New York.

The Justice Department subpoenas follow an ongoing probe by the Securities and Exchange Commission into whether Digital World broke rules by having substantial talks about buying Trump’s company starting early last year before Digital World sold stock to the public for the first time in September, just weeks before its announcement that it would be buying Trump’s company.

Trump’s social media venture launched in February as he seeks a new digital stage to rally his supporters and fight Big Tech limits on speech, a year after he was banned from Twitter, Facebook and YouTube.

The Trump Media & Technology Group — which operates the Truth Social app and was in the process of being acquired by Digital World — said in a statement that it will cooperate with “oversight that supports the SEC’s important mission of protecting retail investors.”

The new probe could make it more difficult for Trump to finance his social media company. The company last year got promises from dozens of investors to pump $1 billion into the company, but it can’t get the cash until the Digital World acquisition is completed.

Stock in Digital World rocketed to more than $100 in October after its deal to buy Trump’s company was announced. The stock closed at $25.16 Monday.

Digital World is a special-purpose acquisition company, or SPAC, part of an investing phenomenon that exploded in popularity over the past two years.

Such “blank-check” companies are empty corporate entities with no operations, only offering investors the promise they will buy a business in the future. As such they are allowed to sell stock to the public quickly without the usual regulatory disclosures and delays, but only if they haven’t already lined up possible acquisition targets.

Digital World said in a regulatory filing Monday that each member of its board of directors has been subpoenaed by the grand jury in the Southern District of New York. Both the grand jury and the SEC are also seeking a number of documents tied to the company and others including a sponsor, ARC Global Investments, and Miami-based venture capital firm Rocket One Capital.

Some of the sought documents involve “due diligence” regarding Trump Media and other potential acquisition targets, as well as communications with Digital World's underwriter and financial adviser in its initial public offering, according to the SEC disclosure.

Digital World also Monday announced the resignation of one of its board members, Bruce Garelick, a chief strategy officer at Rocket One.