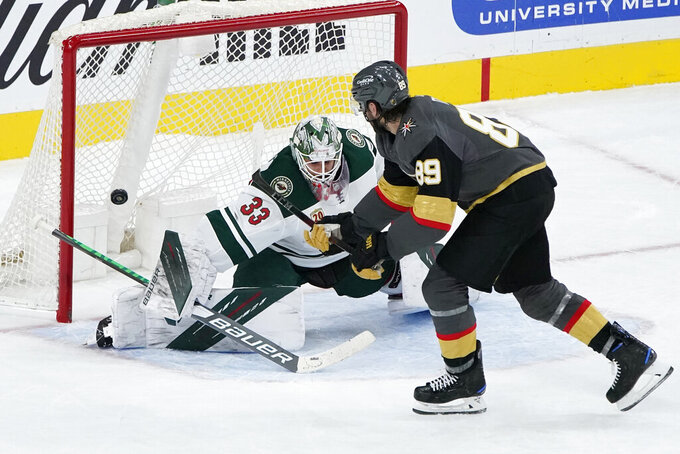 “We’ve been playing so well at home, it hasn’t translated on the road,” said Wild goaltender Cam Talbot, who played his best road game of the season, stopping 35 shots. “Every game is a four-point game this year. Every game is a big game, and when you come into a building like this, you know you’re going to have to go through this team to make it out of our division for the playoffs. This is a tough building to play in and this gives us confidence moving forward.”

Fiala was the only skater to score in the shootout, as he banked his shot off the post and then off Vegas goaltender Robin Lehner.

“He’s a big goalie so I didn’t know what to do to be honest,” Fiala said. “I decided to go low block and got lucky there. Hit the post and off his pad and in. It was lucky but I’ll take it.”

William Karlsson and Brayden McNabb scored for the Golden Knights. Lehner had 35 saves but dropped to 3-0-1 with just six goals allowed since his return from a concussion.

Vegas couldn’t capitalize early in the overtime during a 4-on-3 power play opportunity, as Talbot turned away three shots on goal. The Wild nearly got a last-second overtime win but Kaprizov’s wrap-around was denied by Lehner.

Playing with just 10 forwards on the second of back-to-back nights, missing injured Ryan Reaves and suspended Chandler Stephenson, Vegas appeared to have a little more jump off the opening puck drop than it did one night earlier in a loss to the Los Angeles Kings.

It marked the first time Vegas lost consecutive home games since early last season, when it lost three in regulation from Jan. 7-11, 2020, under then-coach Gerard Gallant, and a fourth in overtime, on Feb. 8, after Peter DeBoer took over.

“I thought we handled it well, I thought it was a non-issue,” DeBoer said of playing with a shortened roster. “Guys are always looking for a few more minutes every night. It was nice not to have that as an issue. I thought we had a great effort. Just unfortunate we didn’t get the two points.”

The one point Vegas did earn moved it into a first-place tie with Colorado, as both are atop the West with 50 points.

Karlsson opened the scoring when he grabbed a loose puck and fired it over Talbot’s right shoulder, marking the first time in four games the Golden Knights scored the game’s first goal.

It didn’t take long for the top-scoring rookie in the NHL to tie the game, as Kaprizov was able to get position in front of the net in time to redirect Jordan Greenway’s shot past Lehner. It was the Russian forward’s 13th goal of the season.

The second period turned into a highlight reel for both goaltenders.

Talbot stopped rookie Keegan Kolesar, who had a beautiful look at the top shelf but had his wrist shot robbed. Just seconds later, after a faceoff to his right, Talbot blocked Kolesar’s backhand from the doorstep. Shortly after Lehner turned away Joel Eriksson Ek’s wrist shot from the slot, it was Talbot once again, this time stopping speedy Alex Tuch on a breakaway.

McNabb snapped a 66-game scoring drought when he took a pass from William Carrier and lasered a wrist shot from near the top of the right circle through traffic and past Talbot. It was McNabb’s first goal since Nov. 21, 2019, against the San Jose, when DeBoer was still in charge of the Sharks.

Minnesota took advantage of a 4-on-3 situation when Spurgeon blasted a one-timer from the left circle to make it a 2-2 game.

Golden Knights defenseman Nic Hague had just six penalty minutes over his first 28 games. He’s been plagued in the sin bin the last four games, accumulating 14 penalty minutes, including four against the Wild.

Stephenson served the first of a three-game suspension, handed down by the league’s player safety department for elbowing Los Angeles Kings defenseman Tobias Bjornfot on Wednesday. Stephenson will forfeit $71,120.70, all of which will go to the players' emergency assistance fund.

The teams conclude their two-game set in Las Vegas on Saturday.