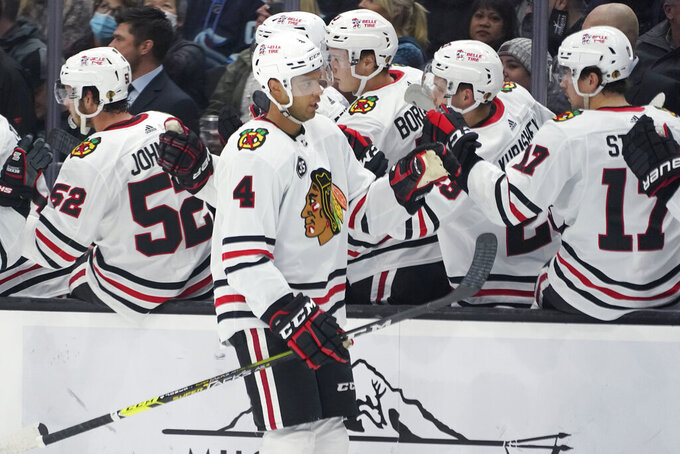 SEATTLE (AP) — Alex DeBrincat wants to become a well-rounded player and not be classified as only a goal scorer.

That means handing out assists and maybe even the occasional fight.

“A long way to go but trying to become a more complete player, not just a shooter. Just keep working on it,” DeBrincat said.

DeBrincat and Patrick Kane each had a goal and an assist and the Chicago Blackhawks beat the Seattle Kraken 4-2 Wednesday night for their fourth straight win.

DeBrincat assisted on Seth Jones' goal in the first period, scored in the opening moments of the second and had the added stat of a fight with Seattle's Yanni Gourde in the third. Chicago's young star was upset after he felt Gourde took an unnecessary hit on Kane.

“He punched me in the head behind the net and then went after (Kane) and cross checked him,” DeBrincat said. “You go after our best player, we can't let that happen. I don't like to fight but I will when I need to."

Jones extend his points streak to seven games with his second goal of the season and Jake McCabe added an empty-netter for the Blackhawks to seal the win. Marc-Andre Fleury stopped 31 shots, including 16 in the second period.

While Chicago isn't complaining about a four-game win streak the Blackhawks were frustrated at how many chances were allowed to Seattle after going up 2-0.

“You see a lot of times we're just kind of throwing it away and whether it gets out (of the zone) or not it puts us in a tough position,” Kane said.

Jared McCann and Yanni Gourde scored in the third period for Seattle, and Philipp Grubauer finished with 15 saves. The Kraken have lost five straight and seven of eight.

“The second and third we’re excellent and tremendous efforts on our part," Seattle coach Dave Hakstol said. "As you look at it that's likely going to be the push we need through three periods to get ourselves headed in the right direction.”

Kane snapped a wrist shot past Grubauer at 5:36 of the third on an odd-man rush for his sixth goal of the season to push Chicago's lead to 3-0.

McCann scored on the power play with 5:45 left to get Seattle on the scoreboard, and Gourde scored on a slap shot with 1:49 left after the Kraken pulled Grubauer to pull to 3-2. However, they couldn't get the equalizer.

“There's no other way to put it, it's frustrating and we need to clean it up,” McCann said.

Jones finished off a 3-on-2 rush with his second goal of the season. The play started with a cross-ice pass from Kane to DeBrincat and left Jones unmarked at the back post. It was Jones’ 67th career regular season goal among his 300 points. He has two goals and five assists during his points streak.

Seattle has given up the first goal in 10 of 16 games this season and five of its past seven losses.

DeBrincat then doubled the advantage at 2:01 of the second, taking an outlet pass from Kirby Dach and using his speed to fend off Seattle defenseman Jamie Oleksiak and flip the puck over Grubauer’s shoulder for his ninth goal of the season.

Seattle was sluggish at the start and couldn’t sneak one past Fleury despite dominating chances in the second period. He made a sprawling diving stop on Gourde looking at an open net moments after Debrincat's goal, and denied McCann and Calle Jarnkrok on chances, and Jeremy Luzon hit the post late in the period.

“It's a lot more fun to play hockey right now but we dug ourselves a big hole. It's still a long way to go,” Fleury said.

Blackhawks: At Edmonton on Saturday.