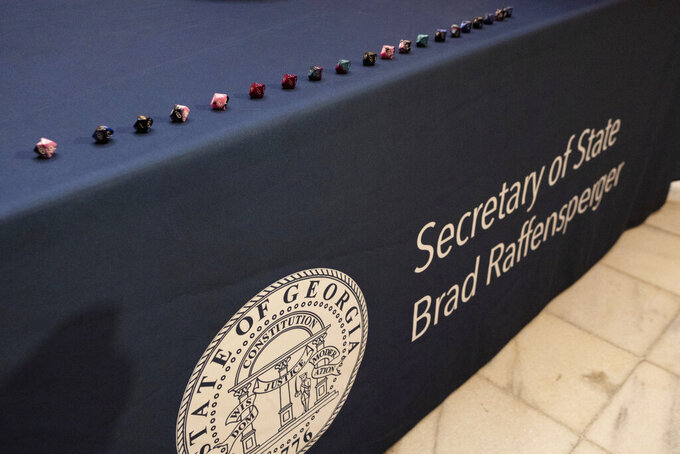 Ben Gray, ASSOCIATED PRESS
A row of 10-sided dice sit on the table after being used as part of process to randomly determine which batches of ballots to audit for a state-wide risk limiting audit of the 2022 general election during a press conference Wednesday, Nov. 16, 2022, at the Georgia Capitol in Atlanta. (AP Photo/Ben Gray) 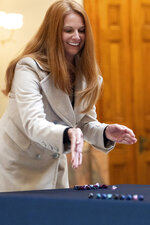 ATLANTA (AP) — Georgia election officials hosted a dice roll at the state Capitol on Wednesday to launch an audit of votes in the recent election for secretary of state.

One by one, people chosen randomly from a basket of names came up to a table and rolled a 10-sided die. In all, 20 dice were rolled, generating a number that was fed into a computer to determine the batches of votes counties must count as part of the audit.

The audit stems from a law passed in 2019, not from any concerns about problems or the integrity of the state’s election results. An audit is required for general elections in even-numbered years on a race selected by the secretary of state. It must be completed before the election results are certified.

Officials say the goal of the audit is to verify that the outcome of the secretary of state’s race was correct and more broadly, to boost confidence in elections.

Former President Donald Trump targeted Raffensperger after the 2020 general election for failing to overturn his narrow loss in Georgia. In a now-notorious January 2021 phone call, Trump suggested Raffensperger could “find” enough votes to reverse Democrat Joe Biden’s presidential victory. Trump falsely blamed voter fraud for his loss in other states as well. State officials and federal investigators, including Trump’s own attorney general, have said there was no evidence of widespread fraud in the 2020 contest.

As part of the audit, every county in the state must check the results recorded by vote-tallying scanners against a hand-count of ballots on the batches of votes selected.

Gabe Sterling, a top official in the secretary of state's office, said the dice roll was part of an effort to make the process of choosing vote batches as random as possible.

“We won't know in advance, so the counties can't go, ‘I’ll make sure this batch is perfect and all the other ones are crap,'” he said.

The counties must begin the audit on Thursday. The secretary of state’s office is asking them to complete it by the next day.

The audit ends either when election officials reach a certain level of confidence that the outcome is correct or a full count has been performed.

State law requires 90% certainty that the outcome is correct, but Raffensperger said last week he is increasing that to 95%, that is to say a “risk limit” of 5%.