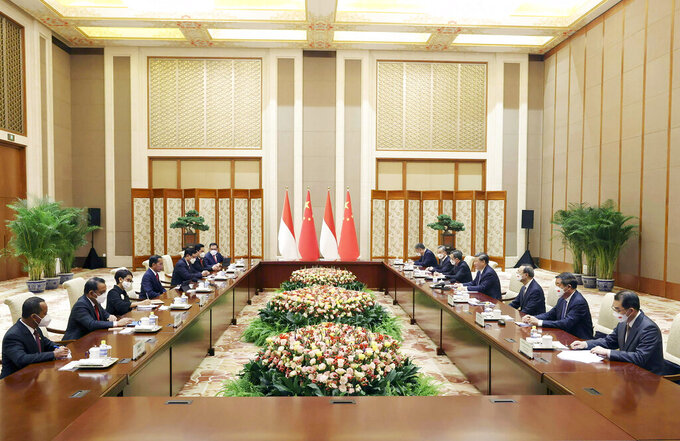 BEIJING (AP) — Indonesian President Joko Widodo on Tuesday formally invited Chinese leader Xi Jinping to the Group of 20 summit in Bali this fall, although it's unclear whether he would attend in person.

The invitation came during a meeting in Beijing where the two discussed issues ranging from trade to maritime cooperation.

“President Xi expressed his thanks and wished complete success for the summit,” China's state broadcaster CCTV said, without giving further details. The summit is to be held on the Indonesian resort island on Nov. 15-16.

Xi has not left China since January 2020 because of the COVID-19 outbreak, choosing instead to attend major events via video. It is also unclear whether he will attend the Asia-Pacific Economic Cooperation forum in Bangkok shortly after the G-20 summit.

The G-20 is considered a valued grouping for China because it includes not only the rich Western countries but also the voices of major middle-income nations such as China, India and Brazil.

State Councilor Yang Jiechi and Foreign Minister Wang Yi have acted as Xi’s proxies over the recent years, even while China’s foreign and economic policies, including its tacit support for Russia in the Ukraine conflict, have put its relations with the U.S., Europe and other countries under heavy stress.

Indonesia and China enjoy generally positive ties, although Jakarta has expressed concern about Chinese encroachment on its exclusive economic zone in the South China Sea, which China claims virtually in its entirety.

Widodo arrived in Beijing on Monday night on the first stop of a trip that will also take him to Japan and South Korea later this week. A statement from Widodo’s office said he described China as Indonesia’s “comprehensive strategic partner.”

“We must fill this partnership with cooperation that is beneficial for our country, and at the same time for the region and the world,” the statement quoted Widodo as saying.

CCTV said the two leaders touched on cooperation battling the pandemic and committed to boosting trade and investment.

A delayed project to build a high-speed rail line from Indonesia’s capital Jakarta to the city of Bandung would be completed as scheduled and other flagship projects launched, it said.

They also agreed to speed up the formulation of a new “five-year action plan” for relations that would “better improve the well-being of the two peoples, and demonstrate greater responsibility for maintaining regional peace and stability and safeguarding global fairness and justice,” CCTV said.

On maritime issues, it said the sides agreed to strengthen communication and engage in fisheries cooperation to “tap the potential of the marine economy.”

The Indonesian president is one of the few foreign leaders to travel to China, which has strictly limited visitors from overseas because of the pandemic.

This story corrects year when Xi has last left China.