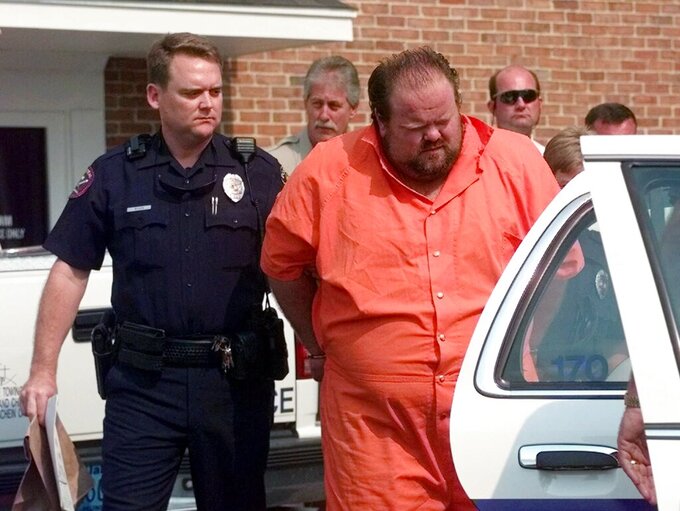 Dave Martin, ASSOCIATED PRESS
FILE - Officials escort murder suspect Alan Eugene Miller away from the Pelham City Jail in Ala., on Aug. 5, 1999. Miller, scheduled to be put to death by lethal injection on Sept. 22, 2022, for a workplace shooting rampage in 1999 that killed three men, says the state lost the paperwork he turned in selecting an alternate execution method. (AP Photo/Dave Martin, File) 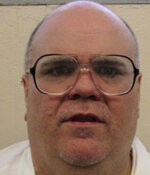 MONTGOMERY, Ala. (AP) — The state asked a federal judge to dismiss a lawsuit filed by an Alabama inmate who is trying to halt his lethal injection later this month by arguing officials lost paperwork in which he selected an alternate execution method.

The lawsuit by Alan Eugene Miller, who was convicted of killing three men in a workplace shooting in 1999, does not state a claim a judge could use to block the execution, set for Sept. 22, Attorney General Steve Marshall argued in a request filed Wednesday.

U.S. District Judge Austin Huffaker, in an order Thursday, gave the inmate until Monday to explain why Marshall's motion shouldn't be granted. In the meantime, the defense asked for an preliminary court order blocking Miller's execution by lethal injection.

Miller, a delivery truck driver, was convicted in a rampage that killed Lee Holdbrooks, Scott Yancy and Terry Jarvis in Shelby County, south of Birmingham. Testimony indicated Miller was delusional and believed the men were spreading rumors about him, including that he was gay.

Miller signed a sworn statement saying he gave a form selecting nitrogen hypoxia to a corrections officer at Holman Prison, where the main death row is located, in mid-2018. But the state said it does not have such a document and plans to put the man to death by lethal injection.

While Miller's lawsuit names Marshall, Prison Commissioner John Hamm and Holman Warden Terry Raybon as defendants, the attorney general's office argued the suit treats all three as “interchangeable cogs in the machinery of government” and should be dismissed.

Miller also cited alleged problems with past lethal injections including that of Joe Nathan James Jr., who was put to death in July in a procedure that was delayed for hours. Death penalty opponents contend the execution was botched.

“The information that is publicly available to date shows that Mr. James’s body was in ‘great distress’ during the execution as executioners sliced into his skin several times to find a vein, and that he suffered many ‘unusual punctures’ that do not normally appear on an executed body,” Miller's lawyers wrote in a request filed Thursday seeking a preliminary injunction against a lethal injection.

The state has acknowledged that James' execution was delayed because of difficulties establishing an intravenous line, but has not specified how long it took. James was pronounced dead hours after the U.S. Supreme Court denied his request for a stay.