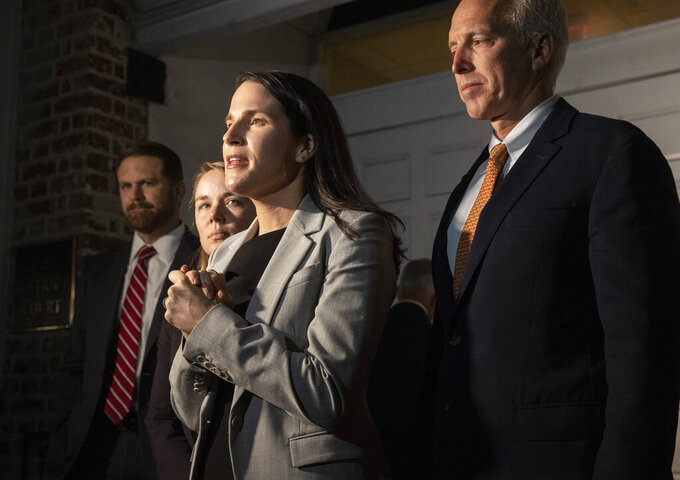 Former Palmetto State Bank CEO Russell Laffitte was allowed to remain free on bail as he awaits sentencing at a later date. Each of the six charges he was convicted of in federal court carry a maximum sentence of up to 30 years in prison.

It was the first trial related to the sprawling Murdaugh legal drama that has captivated true-crime audiences.

Murdaugh is charged with killing his wife and son and his murder trial is set to start in January. He also faces nearly 100 other charges ranging from money laundering to drug offenses to stealing from clients and trying to arrange his own death to get his surviving son a $10 million life insurance benefit.

And while Murdaugh, 54, wasn't in the federal courthouse in Charleston, he loomed over Laffitte's trial.

Laffitte, 51, didn't deny that his handling of Murdaugh's finances helped the attorney steal from clients, but testified in his own defense during his federal trial that he was duped, according to news outlets.

When a prosecutor asked Laffitte if he stole, he answered “I did, but absolutely not intentionally.”

Prosecutors had to prove Laffitte willfully participated in the fraud to convict him.

Prosecutors said Laffitte knew what he was doing when he effectively worked as Murdaugh’s personal banker and eventually became the court-appointed custodian for the settlement money for several of his underage clients.

Laffitte loaned Murdaugh and himself money from those settlements, diverting that money from personal injury or death cases.

Murdaugh had a plan to steal the money, but needed someone organized and detail-oriented to prevent him from being easily caught, prosecutor Emily Limehouse said in her closing statement.

Both through Laffitte's testimony and other witnesses, defense attorneys tried to show the banker was just trying to follow the instructions of one of his biggest clients and was lied to and manipulated.

“He admits to doing it all,” defense attorney Matt Austin said in his closing statement. “He just doesn’t think he was committing a crime.”

But prosecutors pointed out that Murdaugh was giving Laffitte checks written to the bank instead of to the clients, which allowed the lawyer to divert the cash to people he owed money to, whether it be his law firm he was stealing money from, other clients he had already stolen money from or family members.

Laffitte was convicted on one count each of bank fraud, wire fraud and conspiracy, plus three counts of misapplication of bank funds. He also faces 21 counts of financial crimes in state court.

Murdaugh was disbarred and Laffitte was fired last year.

The Murdaugh murder case even made an appearance Laffitte's trial. Murdaugh's wife Maggie, 52, and their 22-year-old son, Paul, were shot to death with different guns on June 7, 2021, outside a family home in Colleton County.

An employee at Laffitte’s bank testified she confronted Murdaugh about missing fees from one of his cases hours before the killings. Neither prosecutors in Laffitte’s, nor the investigators in the killings, have mentioned whether they see a link between the events.

Both Murdaugh and Laffitte are from tiny Hampton County. Murdaugh’s family law firm dominated the legal community and his father, grandfather and great-grandfather were the area’s elected prosecutors for 87 years straight.

Laffitte’s family built Palmetto State Bank, earning a sterling reputation that led to honors like being named banker of the year by the Independent Banks of South Carolina in 2019.

And, as in many small towns, their families intertwined. The law firm employee who confronted Murdaugh about the missing money the day his wife and son died was Jeanne Seckinger, Laffitte’s sister-in-law.

More than a third of the witnesses in Laffitte’s trial were his relatives, with most of them testifying for prosecutors.