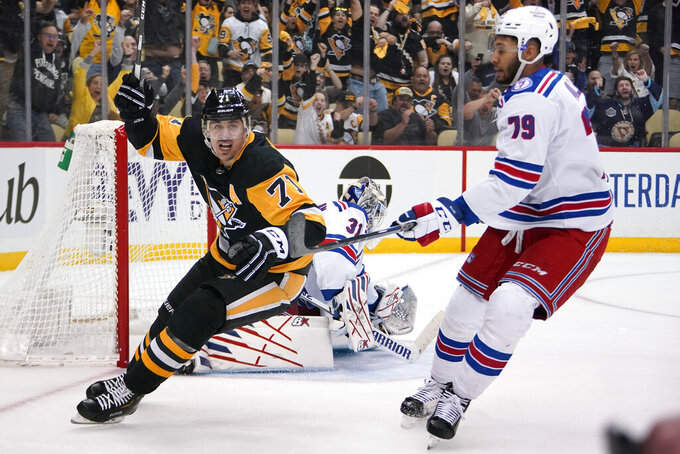 PITTSBURGH (AP) — Evgeni Malkin wants to stay in Pittsburgh. So does Kris Letang. There's comfort in the only NHL city they've ever called home. Success too.

It's why neither three-time Stanley Cup champion has ever hit the open market during their long careers. Until now, anyway.

While Malkin and Letang hoped to put off any speculation about their future until early summer at the earliest, they can't anymore. Not after Pittsburgh's season ended with a draining Game 7 loss to the New York Rangers in the first round of the playoffs.

Rather than prepping for an Eastern Conference semifinal, Malkin and Letang spent Tuesday cleaning out their lockers and trying to talk about their uncertain future as diplomatically as possible.

Both stressed their preference would like to keep playing alongside captain Sidney Crosby for as long as they possibly can. They're both well aware, however, that for the first time, what's best for themselves and what's best for the Penguins might not be the same thing.

“I’m ready to go away,” Malkin said. "If I stay, so much (happier). If not, it’s OK. (I'll) move my family to another city and hopefully play my best hockey.”

Malkin, who turns 36 in July, scored 20 goals despite missing basically the entire first half of the season after undergoing knee surgery last June. He remains a force on the power play, and stressed he is looking forward to using the offseason to return to form.

“I know I’m older,” he said. “I believe in myself. I know it’s (a) hard year for me, big injury, but ...(last summer was) probably hardest summer in my whole life. I want to get back to next level next year and show my best for sure.”

The question for Pittsburgh is, at what price? Malkin's expiring deal carried an average annual value of $9.5 million. While he stressed money is “not a big deal,” his next contract will almost certainly be his last chance to cash in. He estimated he'd like to play 3-4 more years and dismissed a report that said he's considering a return to his native Russia.

A four-time All-Star who also happens to have Hart, Conn Smythe and Calder trophies on his resume, Malkin won't lack for suitors. Yet none of them will offer the chance to play with Crosby and Letang. The trio have served as the cornerstone for a remarkable run that includes three Cup championships and 16 straight playoff appearances, the longest active streak in major North American professional sports.

Letang, who at 35 appears to be getting better with age after piling up a career-best 68 points, would like to play another five years and figures to have played his way to a significant pay bump from the $7.25 million he averaged over the course of the contract he signed in 2014.

Letang declined to negotiate in public, saying he made a promise to general manager Ron Hextall to keep their talks private. Letang pointed to his long history with the team as proof of his loyalty.

“I certainly (tried) to help build something good here and obviously want to keep it going,” he said, later adding "it’s a special group, a group that can win anything.”

The Penguins haven't advanced out of the first round since 2018. Their feel they outplayed the Rangers for long stretches during their seven-game thriller. Ultimately, it didn't matter. They gave away leads in each of the final three games with a chance to close New York out.

The first season for new owners Fenway Sports Group — which bought the team from Ron Burkle and Hall of Famer Mario Lemieux last fall — will be a litmus test of sorts. They could give Crosby, Malkin and Letang a chance to keep it going. Or they could hit reset and try to retool around Crosby, who turns 35 in July but looked as dangerous as ever against the Rangers before missing a portion of Game 5 and all of Game 6 after taking a hit to the head.

Crosby demurred when asked if he thinks he's earned the right to have a say in what direction the club moves in the offseason while reiterating he intends to play to the end of his current deal that runs through 2025.

Besides, Crosby pointed out he's hardly kept his desire to have Malkin and Letang stick around a secret.

“We understand it’s not something that can happen forever,” he said. "Hopefully a little bit longer we can continue to play together. It’s unique, it’s special.”