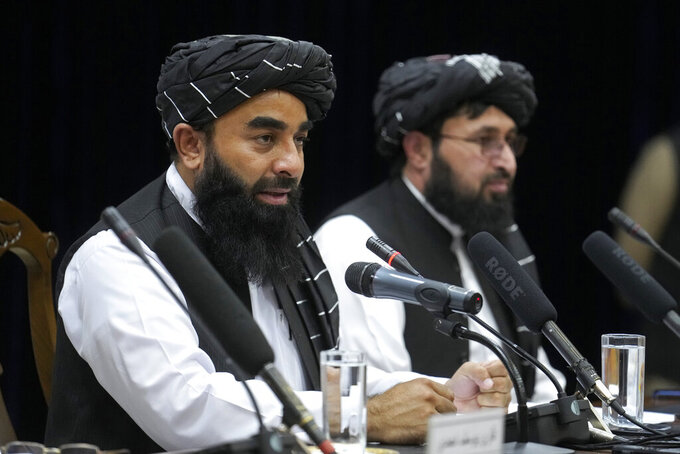 Ebrahim Noroozi, ASSOCIATED PRESS
Zabiullah Mujahid, left, the spokesman for the Taliban government, speaks during a press conference in Kabul, Afghanistan, Thursday, June 30, 2022. Afghanistan's Taliban rulers held a gathering Thursday of some 3,000 Islamic clerics and tribal elders for the first time since seizing power in August, urging them to advise them on running the country. Women were not allowed to attend. (AP Photo/Ebrahim Noroozi)

ISLAMABAD (AP) — A three-day assembly of Islamic clerics and tribal elders in the Afghan capital concluded Saturday with pledges of support for the Taliban and calls on the international community to recognize the country's Taliban-led government.

The meeting in Kabul was tailored along the lines of Afghanistan’s traditional Loya Jirgas — regular councils of elders, leaders and prominent figures meant to deliberate Afghan policy issues.

But the overwhelming majority of attendees were Taliban officials and supporters, mostly Islamic clerics. Women were not allowed to attend, unlike the last Loya Jirga that was held under the previous, U.S.-backed government.

The former insurgents, who have kept a complete lock on decision-making since taking over the country last August, touted the gathering as a forum on issues facing Afghanistan.

According to Mujib-ul Rahman Ansari, a cleric who attended the gathering, an 11-point statement released at the end urges countries in the region and the world, the United Nations, Islamic organizations and others to recognize a Taliban-led Afghanistan, remove all sanctions imposed since the Taliban takeover and unfreeze Afghan assets abroad.

Ansari said that more than 4,500 Islamic clerics and elders who attended renewed their allegiance and loyalty to the Taliban’s supreme leader and spiritual chief, Haibatullah Akhundzada.

In a surprise development, the reclusive Akhundzada came to Kabul from his base in southern Kandahar province and addressed the gathering on Friday. It was believed to be his first visit to the Afghan capital since the Taliban seized power.

In his hour-long speech carried by state radio, Akhundzada called the Taliban takeover of Afghanistan a “victory for the Muslim world.”

His appearance added symbolic heft to the gathering. The Taliban are under international pressure to be more inclusive as they struggle with Afghanistan’s humanitarian crises.

The international community has been wary of any recognition or cooperation with the Taliban, especially after they restricted the rights of women and minorities — measures that hark back to their harsh rule when they were last in power in the late 1990s.

Saturday's 11-point resolution called on the Taliban government to pay “special attention and to ensure justice, religious and modern education, health, agriculture, industry, the rights of minorities, children, women and the entire nation, according to Islamic holy law." The Taliban adhere to their own strict interpretation of Islamic law, or Sharia.

On Friday, Akhundzada, who rose from a low-profile member of the Islamic insurgent movement to the leader of the Taliban in a swift transition of power after a 2016 U.S. drone strike killed his predecessor, Mullah Akhtar Mansour, also offered prayers for Afghanistan's earthquake victims.

The powerful quake in June killed more than 1,000 people in eastern Afghanistan, igniting yet another crisis for the struggling country. Overstretched aid groups already keeping millions of Afghans alive rushed supplies to the quake victims, but most countries responded tepidly to Taliban calls for international help.

The gathering in Kabul also touched on the Taliban's chief rivals, the militant Islamic State group, and appealed on Afghans across the country, saying that “any kind of cooperation" with IS was prohibited.

On Thursday, at the start of the gathering, gunfire was heard near the heavily guarded assembly venue, the Loya Jirga Hall of Kabul’s Polytechnic University. Later, Taliban spokesman Zabihullah Mujahid told reporters that security forces fired on someone suspected to have a hand grenade, but that “there is nothing of concern.”

However, IS claimed responsibility for the attack. It said in a statement that three of its fighters climbed onto the roof of a building near the gathering and posted a video showing a group of heavily armed men, their faces masked, who say they have “taken positions very close to the gathering” and are awaiting orders to attack.

The IS affiliate in Afghanistan, known as Islamic State in Khorasan Province or IS-K, has been operating since 2014. Since the Taliban takeover, IS militants have staged numerous assaults on Afghanistan's new rulers and the Taliban have launched a sweeping crackdown against IS in the country's stronghold in eastern Afghanistan.