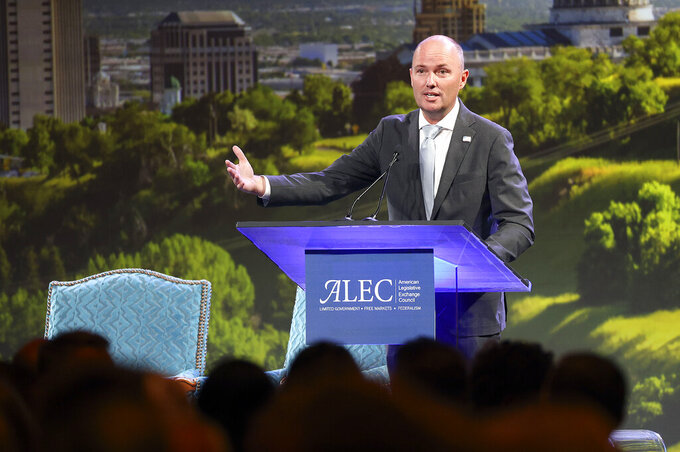 SALT LAKE CITY (AP) — As Utah's daily coronavirus count eclipsed 1,000 cases Thursday for the first time in five months, Gov. Spencer Cox said he wouldn’t be pushing for mask mandates in schools during the upcoming year or a rollback of a state law that prohibits individual districts from passing their own mandates.

Children can’t yet receive the COVID-19 vaccine, and health experts have raised alarms about a school year without masks set to begin next month.

Young children have suffered far fewer adverse effects as compared to older adults, Cox told The Associated Press before a speech in front of nearly 1,500 conservative state legislators and business people from around the U.S. at the American Legislative Exchange Commission convention in Salt Lake City.

“I don’t believe that mandates are, under the circumstances, with what we know right now, are necessary,” said Cox, a Republican. He said he's instead pushing for a program to make N95 masks available to any student who wants one.

Almost none of the attendees wore masks in spite of Centers for Disease Control and Prevention guidance this week that said people should resume wearing masks indoors if they live in areas where the virus is surging.

The state's weekly positivity rate of 14.7% was also the highest since February as a summer surge of the virus continued, new data from the Utah Health Department showed.

Cox called it a “another step in the wrong direction” while renewing his plea for residents to get vaccinated. Nearly 57% of Utah residents ages 12 and older were fully vaccinated as of Thursday, state data shows.

“Nearly everyone who is getting sick, and who will end up in the hospital because of today’s case counts, is unvaccinated,” he said in a statement. “This pandemic of the unvaccinated is tragic because it is preventable.”

Utah reported three new deaths Thursday from COVID-19, bringing the total since the pandemic began to 2,450.