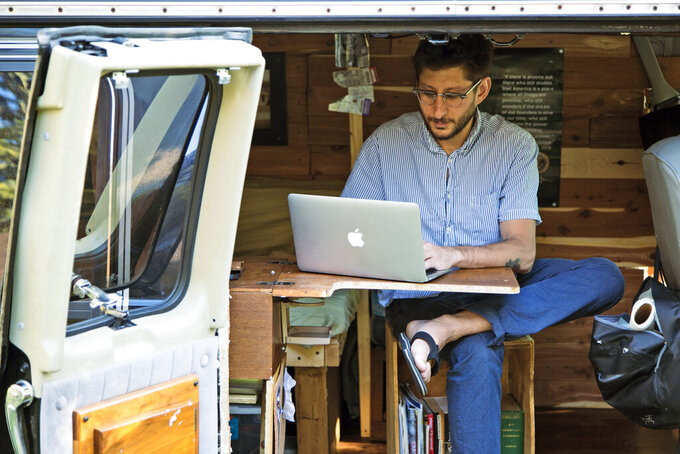 Uncredited, ASSOCIATED PRESS
FILE - In this 2018, photo, U.S. journalist Danny Fenster works out of his van that he made into a home/office in Detroit. The lawyer for an American journalist detained almost five months in Myanmar says he is being prosecuted for an offense allegedly carried out by a news service for which he had stopped working more than half-a-year previously. Danny Fenster, managing editor of Frontier Myanmar, an online news magazine based in Yangon, Myanmar’s biggest city, was detained at its international airport on May 24 as he was about to board a flight to go to the Detroit area in the United States to see his family. (Fenster Family photo via AP, File)

BANGKOK (AP) — A decision on the bail application of an American journalist jailed for the past five months in Myanmar has been delayed because the judge broke his arm, the journalist's lawyer said Wednesday.

Danny Fenster was detained at Yangon International Airport on May 24 as he was about to board a flight to go to the Detroit area in the United States to see his family. He is the managing editor of Frontier Myanmar, an online magazine based in Yangon, Myanmar’s biggest city.

Fenster has been charged with incitement -- also known as sedition -- for allegedly spreading false or inflammatory information. The offense is punishable by up to three years in prison.

The charge against him does not make clear specifically what he is accused of doing. The court proceedings are still in the procedural stage and hearings are closed to the media and the public. He is being held at Yangon’s Insein Prison, where the hearings are being held.

Than Zaw Aung, Fenster’s lawyer, said the court had been expected to rule Wednesday on whether his client should be granted bail, as both the defense and prosecution had submitted their arguments on the matter at the last hearing.

However, the judge did not appear because he is taking a month’s leave after breaking his arm, and another judge is sitting in for him temporarily, the lawyer said. Consequently, the defense and the prosecution submitted their arguments again and the new judge is expected to rule on them at the next hearing on Nov. 3.

Than Zaw Aung said Fenster did not comment on the delay but appeared disappointed at not being released from detention under a recent amnesty for political prisoners. He is among about 100 journalists detained since a Feb. 1 military takeover ousted the elected government of Aung San Suu Kyi. Thirty-four journalists are believed to remain behind bars.

Earlier this month, Fenster was also charged under the Unlawful Associations Act, which carries a punishment of two to three years’ imprisonment for links to banned organizations.

His lawyer has said that he is being prosecuted for an offense allegedly carried out by a news service for which he had stopped working more than half a year before he was charged, and well before this year’s seizure of power by the military.

Government spokesman Maj.-Gen. Zaw Min Tun, when questioned in September about Fenster’s case, responded: “As for journalists, if they do only journalist’s work, there is no reason to arrest them. Danny Fenster did more than just what a journalist does.″ He did not elaborate.