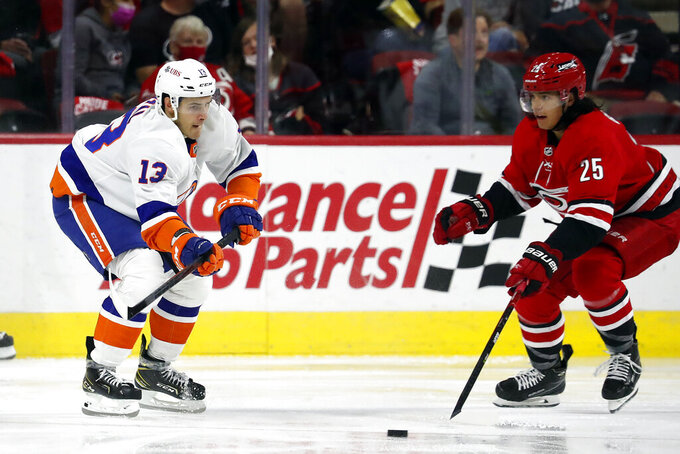 RALEIGH, N.C. (AP) — Carolina Hurricanes coach Rod Brind'Amour felt good about the way his new-look roster played together on the opening night of the season. The familiar faces from three straight playoff appearances — led by Andrei Svechnikov — were pretty sharp, too.

Svechnikov had two goals and an assist to help the Hurricanes beat the New York Islanders 6-3 on Thursday night in a matchup of Eastern Conference playoff contenders.

“He was pretty dominant tonight,” Brind'Amour said. “It seemed like he had the puck every time he was on the ice.”

It was a strong start for the 21-year-old in particular after he agreed to an eight-year contract in August to remain with the franchise that drafted him at No. 2 overall in 2018. He was a physical presence with his 6-foot-2, 195-pound frame, helping him redirect the first goal after jostling for position atop the crease and adding a late empty-netter.

“We played great and I tried to play good,” Svechnikov said. “It's the first game so far and you've got that energy becuase we didn't play for four months ... because we'll see in the long run.”

Teuvo Teravainen added a goal and an assist for Carolina, while fellow returnees Jesper Fast, Jordan Martinook and Nino Niederreiter also scored. Frederik Andersen finished with 25 saves in his debut for the Hurricanes.

Mathew Barzal, Brock Nelson and Anders Lee each scored for New York, while Ilya Sorokin finished with 35 saves. The Islanders enter this season with heightened expectations to contend for a championship after two straight trips to the semifinals of the Stanley Cup playoffs. But they're starting with a daunting challenge: a 13-game road trip while construction is completed on their new arena, with no home game until Nov. 20.

“We seemed to have had some difficulty with them and just finding plays," Barzal said. "I didn’t feel like we could make that second play. We were kind of getting in the zone and it was the next play we couldn’t make.”

After three straight playoff trips, the Hurricanes have eight new players on the opening-night roster in hopes of making a deeper postseason push.

They took a one-year shot on defenseman Tony DeAngelo despite his multiple disciplinary issues, and he finished with two assists while playing on the top power-play unit. That included him finding Teravainen for a crisp one-timer on the right side for a third-period.

Lee's goal came in the Islanders captain's return after missing much of last season with a knee injury. He was part of a productive line with Barzal and Kyle Palmieri (two assists).

The game had some extra time thanks to a quirky replay sequence.

Barzal scored his goal at 7:23 of the first period when he fired a shot that slipped over the line before Andersen knocked it away. But it wasn't immediately called and play continued until a replay review at the next stoppage determined Barzal had scored. That led to 2:07 being put back on the clock to return to the game to Barzal's should've-counted-earlier goal.

BACK IN THE HOUSE

Carolina was playing in front of its first full-capacity crowd (18,680) at PNC Arena since February 2020, shortly before the NHL paused its season due to the COVID-19 pandemic.

The Hurricanes had sellout crowds for second-round playoff games against Tampa Bay, though capacity was capped at 16,299 due to state public-gathering protocols.

Actress Chloe Grace Moretz was in attendance, though she sported a blue New York Islanders jersey that led to Hurricanes fans booing her on the videoboard.

Stormy, Carolina’s ice hog mascot, brought a white Hurricanes T-shirt for her to wear instead. A smiling Moretz stuck with her Islanders gear, though she got up to take a quick photo with Stormy and hug the mascot to make amends.