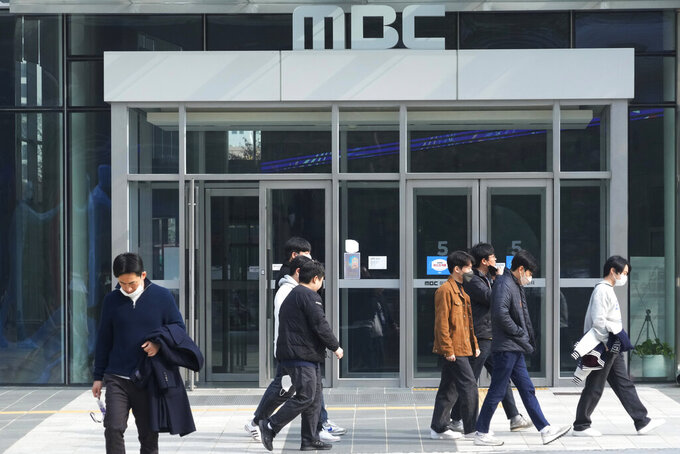 Yoon earlier accused MBC of damaging the country’s alliance with the United States after it released a video suggesting that he insulted U.S. Congress members following a meeting with U.S. President Joe Biden in New York in September.

Yoon’s office told MBC it wouldn’t provide the broadcaster with “reporting assistance” in his upcoming trips to Cambodia and Indonesia for meetings of the Association of Southeast Asian Nations and Group of 20 leading rich and developing countries because of what it described as “repeated distortion and biased reporting” on diplomatic issues.

Yoon, a conservative who took office in May, doubled down Thursday on the decision to exclude MBC reporters from his plane, saying “important national interests” were at stake. Yoon leaves for Cambodia on Friday to attend the ASEAN meetings and will be in Indonesia the following week for the G-20 meetings. He will participate in a trilateral summit Sunday with Biden and Japanese Prime Minister Fumio Kishida in Cambodia to discuss the growing threat posed by North Korea's nuclear weapons and missile programs.

“The reason the president uses so much taxpayer money to travel overseas is because important national interests are at stake and that is also why we have provided reporting assistance to reporters covering diplomatic and security issues,” Yoon said. “(I) hope that the decision could be understood from that perspective,” he said about leaving MBC reporters off his plane, which will also exclude them from in-flight briefings and other media opportunities.

In statements provided to The Associated Press, MBC said Yoon’s office was ignoring press freedoms and democratic principles and that it will still send reporters to Cambodia and Indonesia on commercial flights to cover Yoon’s trip to serve the "public's right to know.”

A coalition of journalist organizations, including the Journalists Association of Korea and the National Union of Media Workers, issued a statement demanding Yoon’s office withdraw what they described as an “unconstitutional and ahistorical restriction on reporting,” and for presidential officials involved in the decision to resign.

“The presidential plane is operated with taxpayer money and each media outlet pays with their own money to cover the reporting costs,” they said.

“Reporting and monitoring how the president as a public figure carries out public responsibilities and duties are an essential part of democracy. We cannot repress our astonishment that the presidential office confuses reporters’ use of the presidential plane with the use of private property and sees it as charity extended by Yoon Suk Yeol the individual," the statement read.

The groups compared the incident to when the White House, under former U.S. President Donald Trump, suspended the press pass of CNN correspondent Jim Acosta after he had a heated conversation with Trump during a news conference.

Seoul-based newspapers Hankyoreh and Kyungyang Shinmun voluntarily gave up their seats on Yoon’s plane to protest what Hankyoreh called an “undemocratic attempt at media control.” They said their reporters will use commercial flights to cover the meetings in Southeast Asia.

The Seoul Foreign Correspondents’ Club issued a statement saying that “restrictions placed on one outlet for coverage deemed to be ‘distorted’ raise concerns for the freedom of all press, domestic and foreign.” It called for all media to be treated with the "same principles of access, regardless of the tone or nature of the journalistic coverage.” In September, MBC caught Yoon on tape talking to his aides and top diplomats following a brief chat with Biden on the margins of the U.N. General Assembly meetings. While the audio was unclear, Yoon could be heard using what seemed to be indecent language in comments the broadcaster captioned as, “Wouldn’t it be too darn embarrassing for Biden if those idiots at legislature don’t approve?”

Yoon’s meeting with Biden came after they both delivered speeches in support of the Global Fund, an international campaign to fight AIDS, tuberculosis and malaria. The Biden administration has pledged $6 billion in U.S. contributions to the initiative through 2025, but it is pending congressional approval. Yoon’s government has promised $100 million.

Yoon’s office later insisted he wasn’t talking about the U.S. Congress or Biden. Kim Eun-hye, Yoon’s spokesperson, said he was expressing concern that the South Korea’s opposition-controlled National Assembly could reject his plan for the $100 million contribution. She insisted that the word MBC heard as Biden was actually “nal-li-myeon,” an expression that can be used to describe something being thrown away.

After returning to Seoul, Yoon said that media could put South Korea’s security in danger by “damaging the alliance with reports that differ from facts.” He has yet to specifically address whether he described South Korean lawmakers as “idiots.”

Yoon’s predecessors have also been accused of suppressing freedom of speech.

Former liberal President Moon Jae-in faced international criticism after members of his governing party in 2019 singled out a Bloomberg reporter with South Korean nationality over what they insisted was a “borderline traitorous” article, resulting in threats to the reporter’s safety. The article’s headline described Moon as acting as the “top spokesman” for North Korean leader Kim Jong Un at the U.N. General Assembly and described his efforts to salvage faltering nuclear diplomacy with the North.

Under Moon’s conservative predecessor, Park Geun-hye, prosecutors indicted a Japanese journalist on charges of defaming Park by citing salacious rumors about her whereabouts on the day of a ferry sinking that killed more than 300 people in 2014.

Before Park, former President Lee Myung-bak was criticized for arresting an anti-government blogger and accused of turning major news networks into his mouthpieces by filling their leadership with supporters and having them compete over a small number of new TV licenses issued by his government.