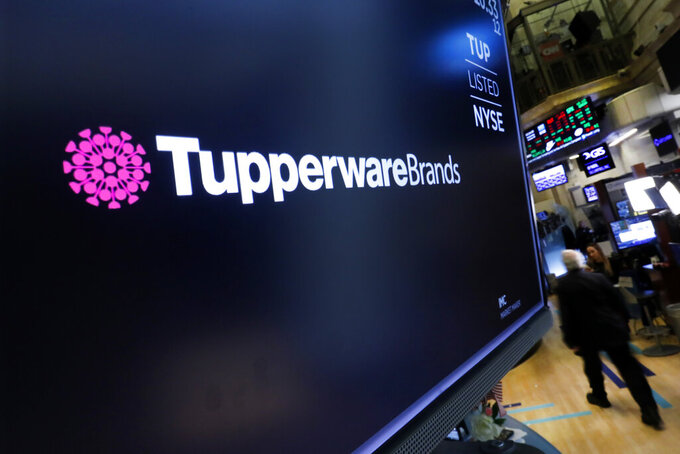 Richard Drew, ASSOCIATED PRESS
FILE - In this Oct. 30, 2019 file photo, the logo for Tupperware Brands appears above a trading post on the floor of the New York Stock Exchange. Sales dropped 16% in the first quarter, with Miguel Fernandez, President and CEO of Tupperware Brands, acknowledging that the company’s turnaround still needs a lot more work. The company withdrew its financial projections for the rest of the year and named a new chief financial officer. The company's stock shed a third of its value. (AP Photo/Richard Drew)

Tupperware's turnaround isn't exactly going as planned, with inflation, COVID-19 and Russia's invasion of Ukraine all weighing on the consumer products company.

Sales dropped 16% in the first quarter, with Miguel Fernandez, President and CEO of Tupperware Brands, acknowledging that the company's turnaround still needs a lot more work.

“Sales were negatively impacted by the Russia/Ukraine conflict, as well as strict COVID-related lockdowns in China and internal challenges in execution, technology, and service," Fernandez said in a statement on Wednesday.

Fernandez said that profitability was squeezed by inflationary pressures, coupled with a lag between rising costs and the company's decision to raise prices.

Tupperware decided to pull its full-year adjusted earnings forecast, citing its quarterly performance and the external factors at play.

The struggles Tupperware Brands Corp. is facing are in stark contrast to a year ago, when profits were soaring as consumers hunkered down at home amid the pandemic and stocked up on the company's reusable containers to store their leftovers. But with COVID restrictions easing and more people increasingly going out to eat, consumers aren't buying containers like they were last year.

Tupperware, which had explosive growth in the mid 20th century, was well known for its Tupperware Party, first held in 1948. But it has sputtered in recent years. Prior to 2021, the Orlando, Florida-based company had negative sales growth for three consecutive years, according to FactSet.

Wendy Nicholson of Citi said in a client note that she wasn't surprised by the challenges Tupperware faced in the first quarter, but that she was highly disappointed that those challenges seem to be behind the company withdrawing its 2022 outlook and pushing out its turnaround plans.

“(We) are concerned that results could look worse for a while before they get better," Nicholson wrote.

Tupperware also announced Wednesday that Mariela Matute will become its chief financial officer, effective May 24. Matute currently serves as CFO at Calavo Growers, a fresh foods processing and distribution company. Matute will take over the CFO post at Tupperware from Sandra Harris.