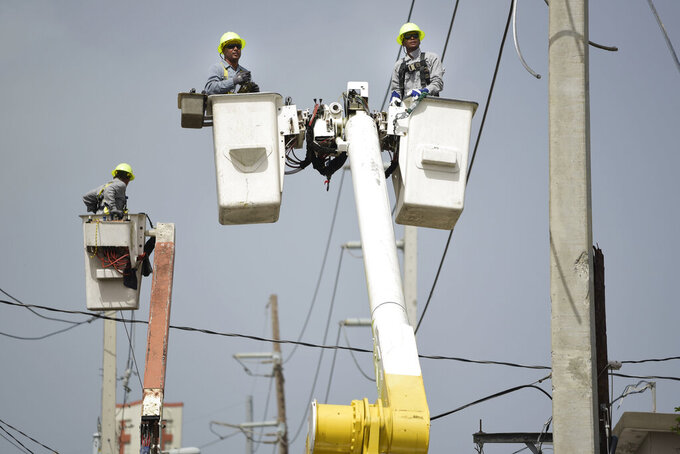 Officials had until Thursday to submit a new proposal on how to cut the Electric Power Authority’s debt — the largest held by any government agency — but a mediation team overseeing negotiations between bondholders and Puerto Rico’s government requested a one-week extension.

Federal Judge Laura Taylor-Swain, who is overseeing the case, approved the extension request, saying it was reasonable and necessary.

Solving the power company’s debt is considered key for Puerto Rico’s economic development as the U.S. territory remains mired in a deep economic slump and investors continue to be spooked by the financial uncertainty and chronic power outages blamed in part on aging infrastructure stemming from decades of neglect and mismanagement.

Puerto Rico emerged earlier this year from the largest U.S. municipal bankruptcy in history after announcing in 2015 that it was unable to pay its more than $70 billion public debt following decades of corruption, mismanagement and heavy borrowing. The island's power company is now the only government agency left that has yet to restructure its debt. Many on the island fear that ongoing prickly negotiations might lead to yet another increase in already costly electric bills to finance payments to creditors.

In a court filing Thursday, the mediation team noted that a federal control board overseeing Puerto Rico’s finances and representing the island’s government in the bankruptcy case has failed to submit basic data and analyses relevant to ongoing negotiations over the power company’s debt.

The team said that without the information, there could be no further progress toward a consensual resolution.

“Stated differently, good faith negotiations...require transparency from both sides and continued engagement,” the team said in its filing.

In a statement sent to The Associated Press, the board said it has cooperated and would continue to cooperate.

The mediation team noted that the board agreed to deliver all information sought by Friday and would be available for questions. It added it was reluctant to request the extension but that forcing the board to file a debt restructuring proposal on Thursday would not be conducive to a consensual resolution.

The request comes after a federal judge overseeing the case ordered a fresh round of mediation talks in late September after an impasse between the board and bondholders. The judge also allowed the board to go to court to determine the amount bondholders should receive.

In March, Puerto Rico Gov. Pedro Pierluisi announced that his administration was scrapping a proposed debt restructuring deal for the power company that had been in the works for several years, saying it was neither feasible nor in the island’s best interest.