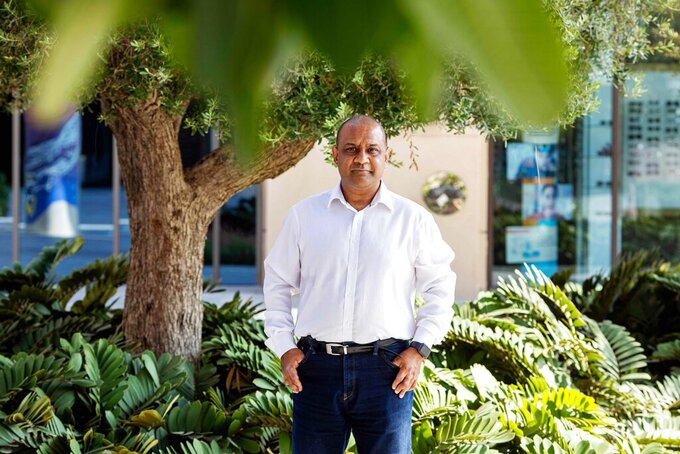 Christopher Pike, ASSOCIATED PRESS
FILE - Sanjay Shah poses for a photograph on the Palm Jumeriah Island in Dubai, United Arab Emirates, Sept. 29, 2020. A lawyer for Shah, who was arrested in Dubai for allegedly masterminding a $1.7 billion tax scheme in Denmark, asked judges on Monday, Sept. 5, 2022, not to extradite Shah. He has maintained his innocence in the case. (AP Photo/Christopher Pike, File)

DUBAI, United Arab Emirates (AP) — The lawyer of a British man who was arrested in Dubai for allegedly masterminding a $1.7 billion tax scheme in Denmark asked judges on Monday not to extradite him.

Denmark wants hedge fund trader Sanjay Shah extradited from the United Arab Emirates, but Shah’s lawyer, Ali al-Zarooni, argued in court that an international extradition treaty between the two countries is still not active in the UAE.

Speaking in front of three judges in a session behind closed doors, al-Zarooni asked the court to deny the extradition request. Al-Zarooni told The Associated Press after the hearing that he believed Denmark had breached international treaties regarding extradition pursuing its request.

Danish officials signed an agreement in March allowing for extradition between the UAE and Denmark. Shah has maintained his innocence in interviews with journalists while living in Dubai over the last few years.

The hedge fund manager had run a center for autistic children in Dubai that shut down in 2020 amid the attempts by Denmark to extradite him. He also ran the British-based charity Autism Rocks, which put on shows by major performers to raise money.

At the time of his arrest, Dubai police said the emirate received an international arrest warrant from Denmark for Shah. The statement added that Shah was accused of a fraud that saw foreign businesses pretend to own shares in Danish companies and claim tax refunds for which they were not eligible. Danish authorities say the scheme ran for some three years beginning in 2012.

Shah was not present in court on Monday. Instead, the judge spoke to all the defendants digitally.

A ruling from the court on the extradition is expected on Sept. 12.

Shah is one of several suspects in the tax scheme sought by Danish authorities.

Shah's arrest comes as an Emirati now leads Interpol, the international police agency, as its president. The UAE, a federation of seven emirates, long have invited the wealthy to invest in the country, largely without questioning where they made their money.

However in recent months, the UAE has arrested several suspects wanted for major crimes, including two of the Gupta brothers from South Africa, wanted over allegedly looting state money with former President Jacob Zuma. However questions over money flows into the UAE have increased as Russian wealth comes into the Arabian Peninsula nation amid Moscow’s war on Ukraine.