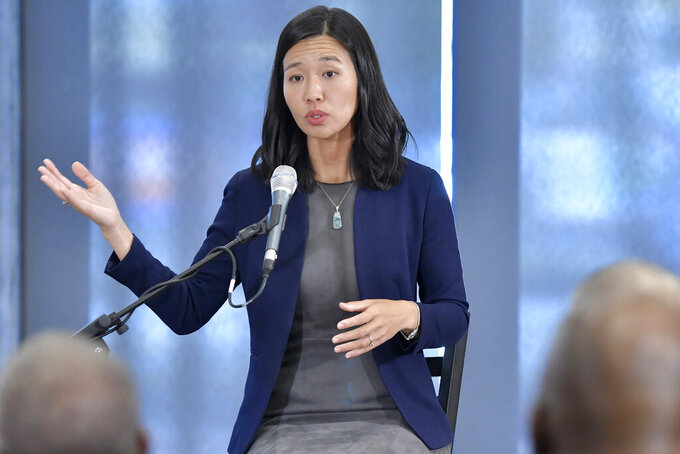 BOSTON (AP) — The two candidates hoping to make history in Boston's mayoral contest — Democrats Michelle Wu and Annissa Essaibi George — spent the final hours of the campaign racing from neighborhood to neighborhood urging their voters to turn up at the polls Tuesday.

Whoever wins will mark a major milestone in the city’s political culture, becoming the first woman and first person of color elected mayor of Boston. In the city’s long history, voters have only elected white men to the top political post.

“It’s clear that Boston residents want city government to be bold and act with urgency to meet this moment,” Wu said. “We’re ready to fight for the change we need.”

On Sunday evening, Essaibi George launched a 24-hour campaign swing through the entire city beginning with a Halloween parade in the Charlestown neighborhood and ending with a scheduled “get out the vote” rally in the Hyde Park neighborhood.

“Still at it! Here at Twin Donuts for breakfast after some radio interviews, as I continue my 24 straight hours on the campaign trail,” Essaibi George tweeted Monday morning from the city’s Allston neighborhood.

Nearly 40,000 votes have already been cast in early voting. Democratic Secretary of the Commonwealth William Galvin told reporters Monday he estimates about 135,000 ballots will be cast in Boston — about 30 percent of the city's 442,000 registered voters.

The race has been closely watched with outside groups pouring millions into the contest.

While the candidates largely agree on which are the biggest issues facing the city — from soaring housing costs, to public education, public transportation, policing and climate change — they have offered very different solutions.

Essaibi has portrayed herself as a political pragmatist, criticizing Wu for proposing policies that she as mayor couldn’t make happen alone. Wu has said those bigger picture policies reflect the needs of Boston residents and said she would work to make them a reality.

One the of biggest issues where the two split is on housing.

Wu said the proposal would strengthen the city’s economy, address climate change and help those who take the bus or subway to school or work. Essaibi George said the cost of the proposal is staggering and would fall on the backs of Boston residents. The decision to eliminate fares is also beyond the scope of the mayor alone.

The 36-year-old Wu, whose parents immigrated to the U.S. from Taiwan, grew up in Chicago and moved to Boston to attend Harvard University and Harvard Law School.

Essaibi George, 47, a lifelong Boston resident, describes herself as a first-generation Arab-Polish American. Her father was a Muslim immigrant from Tunisia. Her mother, a Catholic, immigrated from Poland.